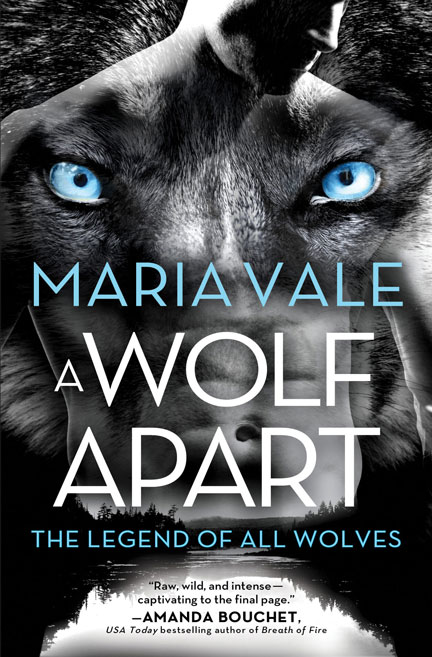 Can a human truly make room in her heart for the Wild?

Thea Villalobos has long since given up trying to be what others expect of her. So in Elijah Sorensson she can see through the man of the world to a man who is passionate to the point of heartbreak. But something inside him is dying…

Elijah Sorensson has all kinds of outward success: bespoke suits, designer New York City apartment, women clamoring for his attention. Except Elijah despises the human life he’s forced to endure. He’s Alpha of his generation of the Great North Pack, and the wolf inside him will no longer be restrained… Can a human truly make room in her heart for the Wild?

Thea Villalobos has long since given up trying to be what others expect of her. So in Elijah Sorensson she can see through the man of the world to a man who is passionate to the point of heartbreak. But something inside him is dying…

Elijah Sorensson has all kinds of outward success: bespoke suits, designer New York City apartment, women clamoring for his attention. Except Elijah despises the human life he’s forced to endure. He’s Alpha of his generation of the Great North Pack, and the wolf inside him will no longer be restrained…

Elijah intentionally lost a challenge that would have brought him back to Homelands. He is battered inside and out and turns to Thea, a woman he doesn’t have any claim on. But she takes him in and cares for his injuries (“a fight” is all he tells her) and when a snowstorm moves in, he stays.  The peace he had hoped for turns to something else.

“‘The great man’”—I try to remember the quotes and strip away the emendations that John made, altering them to our circumstances; “the great wolf” was what he actually said—“‘is the one who in the midst of the crowd’”—John said “of humans”—“‘keeps with perfect sweetness the stillness of the forest.’”

She stares at her book for a moment and then puts her finger on a passage.

“The quote is ‘keeps with perfect sweetness the independence of solitude.’ I like yours though.”

“My old English teacher loved Emerson. But I learned it a long time ago. Must have mixed it up.”

Of course, I didn’t. The summer before we were to go Offland, Leonora did her best to make sure that those of us who were leaving understood how to appear human in the world they had re-created in their image.

“You liked your English teacher?”

“What? My… Yes. Very much. He was more than an English teacher. He was kind of the…head of our little rural community. We’re very tight-knit, but tempers can run short. He worked hard to keep everyone together.”

She dunks the tea bag a few times before fishing it out with a spoon and, wrapping the string around it, squeezes it dry. “Was it worth fighting for?”

“Not really. A good fight isn’t about the outcome. It’s about knowing that you’ve made things better by trying.”

“Honestly, I don’t know if it was worth fighting for. I don’t know anything anymore. And no one seems to know who I am.”

When she blows across her tea, she sends the damp-orchid-and-honey scent to my waiting nose.

“Of course, I do,” I snap, all the Pack’s skepticism and my own self-doubt suddenly brought to a head by this woman who doesn’t know me from Adam. Then I remember what she is. A woman. A human. “I am a partner in one of the most powerful law firms in the country.”

“You’re not just a lawyer, any more than I am just an ECO.”

“So what else would you say you are?”

“All sorts of things. I’m a woman who doesn’t listen to music in the background, because that’s not actually listening. Who is a vegetarian gun owner. Who makes her living helping people but likes to be alone. Whose ancestors were on this landmass when the people who yell at her to ‘go home’ were sleeping with pigs in Europe. Who likes caffeine and Cheetos. Who was in a sorority for four months. Who is the daughter of dead parents and the sister of a dead brother.”

She lifts her tea to her lips.

“What happened to your family?”

“You’re changing the subject. I’m saying that I’ve never met anyone who was just one thing. Who was just ‘a lawyer.’ So, Elijah Sorensson, Esquire, what else are you?”

What else am I? I’m an exile. A disappointment. An Alpha without a Pack. A leader no one wants to follow. A flashy vessel hiding something unspeakably sacred and undeniably fragile. I am a monster: neither one thing nor the other, belonging nowhere.

“Lost,” I say, staring at the fire until my single working eye begins to dry out. “Just. Fucking. Lost.”

My throat feels achy and full, and I turn back to the page, pretending to read, because I feel her ironwood eyes on me, and I know what she sees: an angry, defensive, broken, defeated man in a human’s castoffs and with a wolf-ravaged, bruised-gourd face.

And then I feel something else. I feel Thea’s hand hanging loose between us. She has returned to her book, but the wordless invitation is there. The cabin being what it is, when I let my hand drape to the side of the bed, I’m close enough to touch her.

In the snow-muffled peace of no expectations, I stare sightless at the pages, every nerve focused on the shared heartbeat between our fingers.

When I finally look up from the blurred pages, the mottled fire is reflected in the warmth and welcome of her eyes. I can’t stop myself. I collapse to my knees, my head at her lap, my arm wrapped around her knees, silently asking if this woman who makes a living finding people can find me too.

Maria Vale is a journalist who has worked for Publishers Weekly, Glamour magazine, Redbook, and the Philadelphia Inquirer. She is a logophile and a bibliovore and a worrier about the world. Trained as a medievalist, she tries to shoehorn the language of Beowulf into things that don’t really need it. She currently lives in New York with her husband, two sons and a long line of dead plants. No one will let her have a pet.