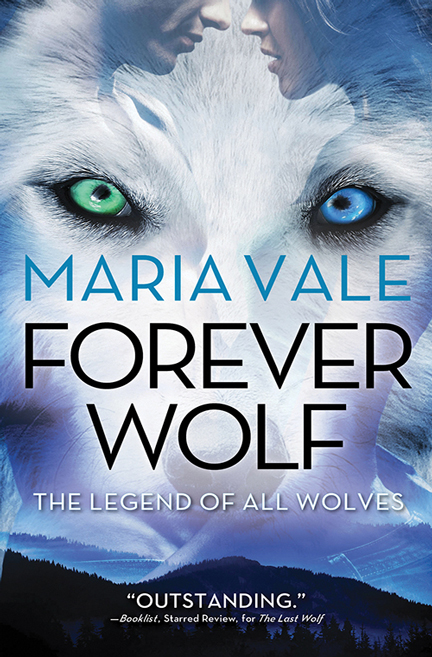 Legend says his eyes portend the end of the world…or perhaps, the beginning…

Born with one blue eye and one green, Eyulf was abandoned as an infant and has never understood why, or what he is…Varya is fiercely loyal to the Great North Pack, which took her in when she was a teenager. While out on patrol, Varya finds Eyulf wounded and starving and saves his life, at great risk to her own. Born with one blue eye and one green, Eyulf was abandoned as an infant and has never understood why, or what he is…Varya is fiercely loyal to the Great North Pack, which took her in when she was a teenager. While out on patrol, Varya finds Eyulf wounded and starving and saves his life, at great risk to her own.

Legend says his eyes portend the end of the world…or perhaps, the beginning…

With old and new enemies threatening the Great North, Varya knows as soon as she sees his eyes that she must keep Eyulf hidden away from the superstitious wolves who would doom them both. Until the day they must fight to the death for the Pack’s survival, side by side and heart to heart…

I focus on the still-pink circlet of scars around his leg, pulling the scar tissue gently apart with two fingers to see how elastic it is. Then I push down, softly at first, and gradually harder. If it starts to swell or bruise, the change will tear apart the underlying network of blood vessels.

“This is not the time to hide what you’re feeling. If you change before you’re fully healed, you will tear yourself open again. I know what I’m doing.”

He leans forward, his arms draped between his legs. “I’m not sure you do.”

Ah. The towel that was barely adequate before is simply laughable now that it is also responsible for covering a thickly engorged cock.

I look up, up, up to his eyes. They’ve changed, darkened. They are no longer the pale blue of old ice and bright variegated green of forest depths, but the deep blue of late evening and the dark green of rain- drenched fir. His white hair loops forward and then falls over his shoulder. A sharp, green muskiness like rubbed coriander bothers my nose with something warm and dangerous.

“I don’t think it’ll open up. Remember, your trigger is here.” I point without touching toward the place I’d found before. “It’s inside, not outside, so you need to tighten those muscles. But take your shirt off first.”

“Okay,” he says, pulling off his shirt. “Why?” “Because if by some miracle you get it right, I’ll have to cut you out of it, and we don’t have that many changes of clothes.”

Turning away, I smooth the T-shirt still warm from his body against my chest. Philadelphia Frostbite Regatta, it says. When I glance back, his eyes are closed and a tremor roils through the cut muscles. Parts of him around his pelvis that don’t look like they could tighten any more ripple.

Sitting down on a dry trunk, I stare at the lower slopes of Norþdæl, blanketed with wine and gray and dark gold, dotted with dark-green evergreens and occasional skeletal fingers of white birch.

“How are you doing over there?”

“Working on it.” He coughs a handful of fake coughs, trying, I suppose, to reproduce whatever caused that earlier change.

“I’m going to be able to change back, right?”

“Of course. Once you learn what your trigger is, you’ll never forget it.”

I scratch my ear. “It’s nothing like riding a bike. You’re changing into a wolf. Wolves don’t ride bikes.”

A squirrel squats on his hind legs, eyeing me from a distance. At this moment, from this angle, the daylight moon forms a curved crown above his head. “Except… you do know not to change before the Iron Moon, right?”

“And you don’t change back?”

He stares down at his feet, clenching and stretching his toes, as though confirming that for now at least, he still looks human. “Is it like when you’re a wolf, but you still know who you are? You still remember everything?”

“Nobody knows what they remember or don’t, but they’re definitely not the same. They’re not Pack any- more.” Over my shoulder, I see the panic on his face, his hand clinging to the little towel, like the last vestiges of his humanity.

“Don’t worry. I won’t let that happen to you,” I say. His eyes consider mine for a moment. I nod at him, and he starts again, pressing harder, moving, clenching, roiling, undulating.

The squirrel takes advantage of my distraction and bolts up a nearby tree. High up, he hangs, head down, legs splayed, and chitters at me for invading his territory.

I leap at Eyulf’s strangled cry, just managing to catch him as he pitches forward, his feet narrowing, arch elongating, calf muscle tightening.

How did I forget to tell him to lie down?

I stagger to the ground, his body writhing in my arms. His green eye searches blindly, his grotesque mouth mangles a groan before going silent. The towel drops away from his narrowing hips and his clutching fingers. My hair falls forward over him.

Hush, wolf, you are safe with me.

5 copies of The Last Wolf

Maria Vale is a journalist who has worked for Publishers Weekly, Glamour magazine, Redbook, the Philadelphia Inquirer. She is a logophile and a bibliovore and a worrier about the world. Trained as a medievalist, she tries to shoehorn the language of Beowulf into things that don’t really need it. She lives in New York with her husband, two sons and a long line of dead plants. No one will let her have a pet. Visit her at mariavale.com.