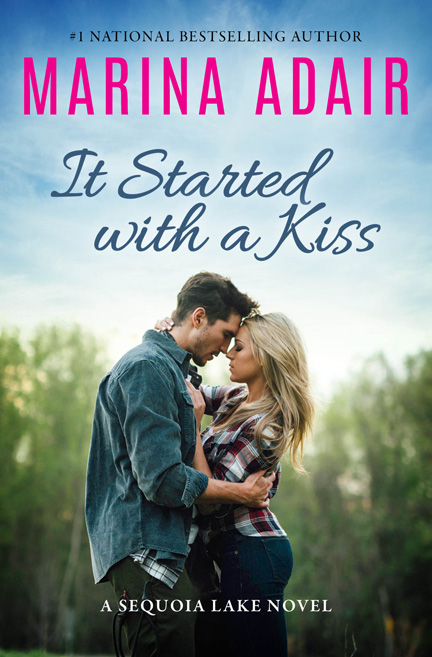 Marina Adair’s It Started With a Kiss Exclusive Excerpt.

With a kidney transplant behind her, Avery Adams is determined to channel her inner adventurer and explore everything life has to offer. Only problem is, the closest she’s ever come to a real-life adventure was sixth-grade science camp. So to seize the summer in her rustic Sierra Nevada town, she takes a job as a guide at the local adventure lodge. But Avery doesn’t realize her biggest challenge will register at six-plus feet of rugged good looks and alpha-male charm. Title: It Started With a Kiss

With a kidney transplant behind her, Avery Adams is determined to channel her inner adventurer and explore everything life has to offer. Only problem is, the closest she’s ever come to a real-life adventure was sixth-grade science camp. So to seize the summer in her rustic Sierra Nevada town, she takes a job as a guide at the local adventure lodge. But Avery doesn’t realize her biggest challenge will register at six-plus feet of rugged good looks and alpha-male charm.

As a member of the Sequoia Elite Mountain Rescue team, Tyson Donovan has made a life out of cheating death and rescuing weekend warriors from the treacherous terrain. “The world is my home” is more than just a motto; it’s what scares off women who would otherwise try to tie him down. When his dad’s health lands the family’s adventure lodge in serious danger of going up in flames, he moves home—and quickly remembers why he left. Until he meets Avery, the irresistible new guide who makes him want to stay.

Tyson gives the inexperienced Avery a lesson in romance that her books could never teach her. And with her undeniable spirit for life, Avery shows Tyson the healing power of love. But with one misstep, everything comes crashing down, and they’ll both have to take the biggest leap of all—into the kind of adventure that lasts a lifetime.

Twenty minutes later, Avery walked down the front steps of the local Moose Lodge and onto Lake Street, painfully aware that the safety harness was jammed and not coming off anytime soon. The sun was setting behind the lush peaks of the Sierra Nevadas, streaking the sky a brilliant orange. A cold evening breeze blew through the thick canopy of ponderosas and crape myrtle trees that lined the main drag of town.

Determined to get out of the harness so she could talk to Irene and Dale about running this trek on her own, she headed toward the purple Victorian with light yellow trim at the end of the street that had SIPS AND SPLATTERS and a paintbrush in a martini glass painted on its leaded windows. It wasn’t a hardware store, but she’d seen enough framing tools to know the owner possessed a screwdriver and a set of hands strong enough to pry open the carabiner. Convincing Dale she was ready to take clients into the great outdoors while stuck in basic climbing gear wouldn’t make the kind of impression she was going for.

Only, before she reached the shop, she noticed the CLOSED sign hanging in the window. She also noticed a big, shiny, black ego-trip of a truck with mud tires, a lift kit, and a mountain bike secured to its top.

The truck was parked directly under the town’s flapping banner—which read COME FOR THE ADVENTURE, STAY FOR THE PEOPLE—and practically on top of her Mazda’s bumper. Not only did it have a toolbox in its bed, the box appeared to be unlocked—and its owner nowhere in sight.

Avery found herself laughing at the situation, but a good part of her wanted to cry. Like her Mazda, Avery had spent the majority of her life boxed in. First by her mother’s illness, then by her own, which had led to doctors and medical regimens, and finally Carson. And she’d taken it all with a smile, doing her best to make herself as little of a nuisance as possible.

The idea of approaching life carrying a big stick didn’t appeal to her; she’d always preferred to walk softly through life, to ask permission before rifling through someone’s personal effects. But look where that had gotten her. Booking a private trek that someone else would get to lead.

Ready to make a few waves of her own, and since no one was around to grant or deny her access, Avery reminded herself that living loud required no permission. She scanned the street for passersby, then reached over the side of the truck to play with the latch on the toolbox and—

“Look at that,” she said to herself.

With one toggle the latch came undone, two and Avery had the lid propped open and was staring at a handy-dandy screwdriver sitting on the top, as if waiting for a stranger in need to happen by.

She was a stranger, and she was in need, and when she happened by no one was there. So in theory, no one would know she’d borrowed the tool for a second or two.

Palms sweating and heart racing, Avery did one last quick scan of the area, then snatched the screwdriver and quickly stuck the flat edge inside the opening of the carabiner. With a calculated twist she wedged open the two metal clasps and—

The screwdriver launched itself up into the air only to come down and land near the storm drain. Avery scrambled to catch it before it rolled out of sight, but her short legs combined with the restrictive harness made retrieval without face-planting into the Greater Sierra sewage system impossible, leaving her standing in a harness and watching the stolen tool roll into the drain.

She couldn’t leave without coming clean and promising to at least replace the screwdriver, but she couldn’t stay too long either because Dale headed for home around sunset. And if she didn’t catch him tonight, her adventure would have to wait until Monday.

And Avery was tired of waiting, so with the first hints of orange peeking over the mountains, she pulled out her brightest lipstick—Fearless Red with a gloss luminous enough to flag down passing planes—which she’d bought when she’d decided to start living loud. Propping her knee on the hood of the truck, she gripped the back lip of the hood for leverage and pulled herself up.

She perched on top of the hood on all fours, took a bold breath, and ever so carefully scrawled across the front windshield: I OWE YOU A SCREW—

Damn it! Her lipstick, warm from the day’s heat, broke and rolled down below the wipers and out of sight. She leaned forward and slipped her fingers inside the crevice to get it, thunking her forehead against the windshield when she realized it was right out of reach.

“Either you were going to write in your ex’s phone number or this is my lucky day.”

Avery slowly turned her head, and what she saw sent her heart to her toes. Leaning against a lamppost, looking relaxed and incredibly dangerous in a pair of battered hiking boots, stood a mountain of hard muscles and pure testosterone. He wore low-slung cargo pants with a million and one pockets holding a million and one surprises, enough stubble to tell her it was five o’clock, and a Sequoia Lake Lodge cap.

She reread what she’d written and felt her face flush. Marina Adair is a #1 national bestselling author of romance novels. Along with the St. Helena Vineyard series, she is also the author of Sugar’s Twice as Sweet, part of the Sugar, Georgia series. She lives with her husband, daughter, and two neurotic cats in Northern California. She loves to hear from readers and likes to keep in touch, so be sure to sign up for her newsletter at marinaadair.com/newsletter.