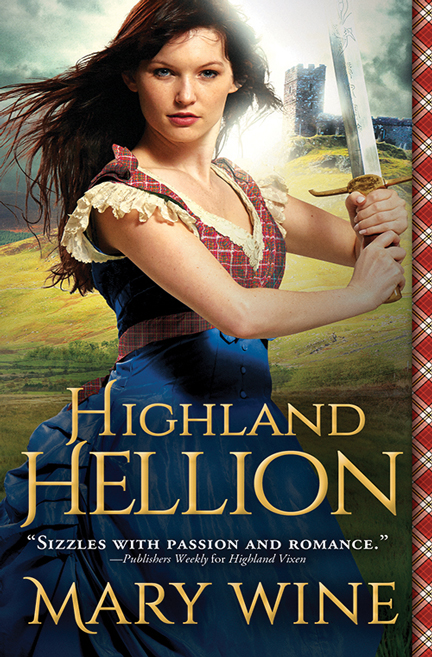 Check out Mary Win’s HIGHLAND HELLION and enter to win a bundle of her Highland Weddings series!

Scotland is seething with plots, the vengeful Gordons are spoiling for a fight, and the neighboring clans are at each other’s throats. All it takes is a passionate hellion with a penchant for reckless adventure to ignite the Highlands once more. Scotland is seething with plots, the vengeful Gordons are spoiling for a fight, and the neighboring clans are at each other’s throats. All it takes is a passionate hellion with a penchant for reckless adventure to ignite the Highlands once more.

The wind rustled the leaves of the trees as the clouds shifted and blackened the night. It wasn’t darkness that made her nape tingle; no, it was something else. She started to turn, realizing she’d made a grave error in facing the river while the sound of the water might cover the steps of anyone nearby.

The realization came too late. She felt a hard blow land on her head and felt pain split her nearly in two. She struggled to hold back unconsciousness as she raised her hands to defend herself, but she was slow and clumsy. Her captors laughed as they pulled her away from her horse and looped a length of rope around her. It bound her arms to her chest, and they gleefully added two more loops before tying it off.

“Now that’s a fine prize to be sure,” one of them declared. “Yer sire is going to blister yer arse, lad, once he pays yer ransom.”

“Wager Marcus MacPherson will take a turn at that too, since yer one of his lads.”

There was a course of amusement at her expense, while the man holding the end of the rope tugged on it and pulled her along with him. She ducked her chin and stumbled after him.

“Look what we have here.”

Someone kicked her in the backside. It sent her sprawling, and with her arms bound, she tasted the dirt as she went rolling.

Katherine was just sitting up when the order came. Compliance was immediate. Silence fell around her as she felt the weight of a stare.

It was a foolish thing to think, but as the man stepped closer and lowered himself onto his hunches in front of her, she would have sworn she actually felt his gaze on her. The clouds shifted, casting him in yellow moonlight, and she stiffened. The reaction rose from deep inside her, shocking her as much as the sight of the man considering her.

As hulking large as Marcus, but he struck her so much differently. Her belly tightened, and she felt like her eyes widened before she tucked her chin, as she’d learned to do to keep her gender hidden.

The man reached right out and cupped her chin to raise it again.

She gasped and recoiled.

The contact of their skin was jarring. She kicked away from him, but her gaze remained locked with his.

“It’s just a little MacPherson laddie,” one of the men spoke up. “Should be worth a few pieces of silver.”

“Got his horse too,” someone else said. “I’m thinking it’s worth more than the whelp.”

There was a round of chuckling at her expense.

The clouds shifted again, giving her even more light, and this time she saw the feather standing up on the side of the leader’s bonnet. There was a twinkle from the brooch holding it that could only come from gold.

“Ye’re blind, Cedric,” the man in front of her said.

His voice was deep and controlled. A shiver went down her spine as she recognized how completely in his power she was.

“How so?” Cedric asked. He gave the end of the rope. “I caught him sure enough.”

The man in front of her looked toward his man. “This is a lass.”

He rose, proving just how powerful his body was. The motion was fluid and graceful, like a hawk when it swooped down on its prey.

“Ye should have noticed how that rope is binding her arms and pushing her breasts up against whatever she bound them with.”

Katherine felt her cheeks heat. It had been a long time since she’d blushed, and she didn’t welcome the return of such reactions. But her distemper didn’t change the truth. He breasts were being pushed up, making a little pair of mounds in the front of the jerkin that wouldn’t be there if she were male.

“I am Rolfe McTavish.” He leaned over and hooked her by the coils of rope, lifting her up with one hard pull. “And ye are foolish in the extreme, mistress.”

He pulled the rope off her, tossing it toward his man Cedric, who caught it but glared at his laird’s son. “So what if it’s a lass? Still worth a ransom, I bet. Likely running away from a match. That means she has a dowry worth fighting over. Who knows? I might just wed her meself.”

Katherine took a step back, and then another when she realized they were letting her get closer to the horse. It occurred to her that they didn’t think she was very accomplished at mounting. After all, most women would use a mounting block. It had taken her months to build up enough strength to do it and still more months of strained muscles.

Tonight, every bit of pain seemed insignificant compared to the knowledge that she could fend for herself.

“Can’t see much of her in those clothes, but she might be sporting enough.”

Rolfe stepped partially in front of his man. There was an odd tension in the air that made her belly want to heave, but she didn’t have time to be distracted by her emotions. She drew in a deep breath and let Marcus’s voice fill her head. The one he used when instructing.

Fighting is no’ just about who is strongest, but about who has better control…

Rolfe’s men were chuckling, while the laird’s son had his back to her. She took advantage of the moment, turning and jumping off a rock before gripping the sides of the saddle.