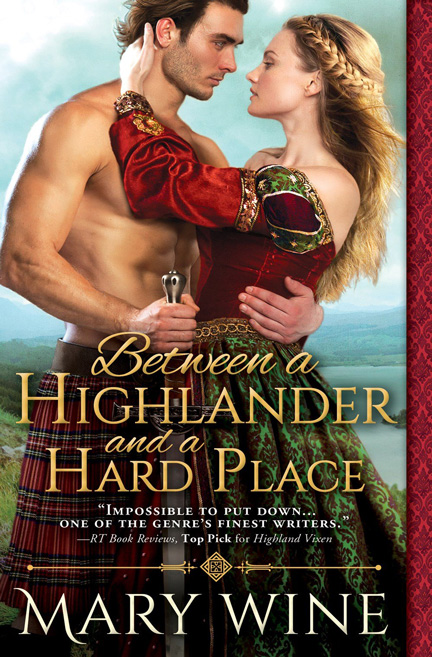 In Mary Wine’s BETWEEN A HIGHLANDER AND A HARD PLACE, Athena Trappes thinks she’s in love…until she discovers the scoundrel only wanted her as his bit on the side. Enraged, she does what any spirited Englishwoman would do: set fire to his belongings, incur his dangerous wrath, and flee—immediately. With nowhere else to turn, she seeks freedom in the wilds of Scotland…. A fierce Englishwoman on the run.

A Highland Laird who needs a proper wife.

And a desire neither can resist.

Athena Trappes thinks she’s in love…until she discovers the scoundrel only wanted her as his bit on the side. Enraged, she does what any spirited Englishwoman would do: set fire to his belongings, incur his dangerous wrath, and flee—immediately. With nowhere else to turn, she seeks freedom in the wilds of Scotland.

Highland Laird Symon Grant lost his wife years ago, and it’s his duty to find another. Athena is not exactly what the clan has in mind for him, but Symon’s heart burns with unexpected passion for the woman who would risk everything to be free.

May Day was something every man near him was looking forward to. Now that dawn had broken, they were creeping off to peek at the girls. Symon sat up, but his member wasn’t stirring at the idea.

And it damned well should have been.

Which meant he was going toward the woods because he was damned tired of the way his blood felt like it was frozen in his veins.

It was May Day. The girls washed their faces with morning dew with their hair flowing free and naught on but chemises. The only men not stirred by the idea of it all were the ones wearing sackcloth in the monastery.

At last he grinned.

He’d done too many things to be considered for a life of piety.

Too many stolen kisses on summer days.

Ah, but Tara’s had been the sweetest of them all. Shy little kisses that their wedding vows dictated she owed him, and yet he’d enjoyed coaxing them from her.

He moved through the woods, using skills he’d learned to stay alive during raids. Today was an anomaly. A day when McPherson, McTavish, Grants, Robertson, and others dispensed with their feuds in order to indulge in spring festival.

Today, he kept low to the ground and moved carefully in order not to be heard by the women. The game would last only until full light, when skirts and dresses would go back on, but the hair would be left down until sunset.

Of course the fun was catching glimpses of the girls in their chemises.

At last Symon felt his enthusiasm growing. He wasn’t sure if it was the promise of seeing a few well-turned calves or maybe just the idea of being able to sneak closer without being heard.

Not that it mattered. He crouched low, staying in the shadows close to the trees and making sure he was near enough to the river to allow the sound of the water to mask his motions. He pulled his plaid up to cover his head, the muted color of the wool allowing him to blend better with the surroundings.

Other men passed by, drawn by the soft sound of whispers farther away from the river. Symon decided to wait, leaning in so he was pressed against a thick tree trunk.

At first, he thought he imagined her.

While the other women moved deeper into the woods, this one hung back, content by herself.

Her hair was a golden cloud. Like a crown, and she wore it proudly. She was graceful but tall. It drew his attention because he was accustomed to dwarfing the women around him. She reached up, finding new spring leaves that the other girls hadn’t been able to touch, and tipped them so that the dew dripped down on her face. The wind carried her husky laughter to his ears as he felt his lips being split by a grin wider than any he’d felt in a long time.

The first rays of the sun showed him the outline of the mounds of her breasts.

Ones that would fit his hands.

His member stirred. She lowered her head, and their gazes met. Her eyes widened as her lips rounded in surprise. It might have been an hour that they stood there, staring at one another; Symon honestly couldn’t have said. Her eyelids lowered, fluttering against her smooth cheeks.

He reached up and tugged on the corner of his bonnet.

Something flickered in her eyes as he performed the common courtesy gesture. A hint of trust perhaps. He fought the urge to move closer to her, caught between the need to close the distance between them and the fear that she’d take flight if he moved.

He hadn’t worried about a woman’s opinion of him in a very long time.

Something rustled behind them, gaining her attention, and then she took flight. Her long legs carried her swiftly, right out of his sight, as he cursed.

The lad who had startled her stood gap-jawed while she disappeared.

“Was she real?” he asked as he stopped beside Symon.

“I’d no’ be surprised to discover her a forest sprite.” He patted the younger lad on the shoulder. “But ye can be sure I’ll do me best to prove her a mortal woman before the day ends.”

And that was a promise he was going to enjoy making good on.