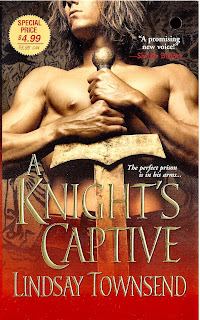 Hello, I’m Lindsay Townsend and I write historical romance novels for Kensington Books and Bookstrand of SirenBookstrand. Thank you for hosting me on the Romance Junkies blog today.    I thought I would talk a little about a less-well-known aspect of English literature: Anglo-Saxon poetry. There are some beautiful and very poignant poems in Old English. Poems such as ‘The Seafarer’ and ‘The Wife’s Lament’ speak to us even today of love and loss and longing. There are poems that contain useful information – verse is a useful memory device – and poems celebrating places like Durham, battles such as the battle of Maldon, biblical heroines such as Judith and profound mystical experiences. ‘The Dream of the Rood’ takes the idea of the cross on which Christ was crucified: the ‘wondrous tree’ from which he hung, and has the tree speak to us directly as it too suffered with Christ.I wanted to honour this great tradition in my own way in my latest story for Kensington, A KNIGHT’S CAPTIVE (due April 2009), which takes place in 1066. I did so by devising my own versions of poems that were another part of Anglo-Saxon society and poetry – riddles.
There are riddles about wine, about a bookworm, about a reed, about a shield, about a plough. Some are saucy and double-edged in meaning; all give clues as to what people noticed in those times, what was important to them, what amused them. Some of the original riddles can be seen at http://www.abdn.ac.uk/english/beowulf/riddle.htm or at http://www.stavacademy.co.uk/mimir/riddles.htm. I read them and even in translation I feel directly connected to a people long past – a wonderful, slightly eerie event.

Here are my own riddles. They appear in A KNIGHT’S CAPTIVE as the heroine Sunniva and hero Marc are attempting to escape the clutches of her uncle in the mysterous and dangerous fenlands:

She was a good traveler, Marc thought, kneeling up in the log boat to row. As the darkness faded to a dusky rose and the sun began to burn off some of the river-fog, she began to ask him riddles.
“This is one way we English pass the long winter evenings, so it is a skill you need,” she said.
“Ask away,” Marc answered. It passed the dull time of rowing and he could still listen and keep watch. Her voice lilted to him over his shoulder, teasing and playful.
“A giant, now toppled,
hollow and dead,
still glides where it never would
when alive.”
That was easy. “This boat,” Marc answered.
“Here is another,” Sunniva paused to wrap her head-square about her alder paddle to save her hands against the knobbly bark. She had offered to tear it in two for him to share but, when Marc shook his head, she cleared her throat and declared,
“This knave creeps and clings,
A friend to mischief, the enemy
of sight. The sun may drive him off -”
“You cannot claim fog is male,” Marc interrupted. “It is a woman. Listen.” He listened himself first, checking all about was still and reedy, no dogs or busy hunters, then spoke.
“She winds her promise of mystery about you,
Endlessly deceiving and beguiling. Softer than dew.”
“Not so,” Sunniva replied at once. “Listen -”
And so they went on, moving slowly but steadily through the fens until they reached a point where the mist seeped away and they found themselves on a river, rowing to a fording-place.

Here is the blurb and opening excerpt of A KNIGHT’S CAPTIVE:

A KNIGHT’S CAPTIVE. The perfect prison is in his arms…

In the year 1066, England struggles against Norman invaders, and two strangers cross paths on a pilgrimage fraught with peril – only to discover a love worth any danger….

Battle-weary Marc de Sens has never encountered a woman like Sunniva of Wereford: beautiful, brilliant, and miles above the curs who call themselves her kin. Alas, she is promised to another and Marc’s obligation is to his three orphaned nieces. But when Sunniva’s circumstances suddenly change, Marc learns the truth about her “betrothal”…

A rough-hewn knight so gentle with children intrigues Sunniva, who never knew a kind word or caring touch from any man until Marc rescued her from the grimmest of fates. When her loutish father and brothers are killed, Sunniva is finally free, but her troubles are far from over. Although Marc has appointed himself her protector, he has a dark secret – as well as an uncanny ability to disarm her completely…

“Uncle Marc! Is she not as beautiful as the sun? That is what her name means. She is Sunniva, Sun-Gift. Do you not think she is like the sun?”
“Steady, little one. You will wake your sisters. But yes, you are right. She is most comely.”
Ignoring the powerful temptation to look where Alde was pointing, Marc tucked the ends of his big traveling cloak around his excited niece and encouraged the child to lie down again by doing so himself. A swift, anxious glance confirmed that Judith and Isabella were sleeping, sprawled under his cloak, their small faces sunburned with weeks of travel. Isabella was sucking her thumb. The day had been long, the riding hard and tiring. He prayed she would sleep through, free of nightmares.
Just one night, Lord Christ. As a mercy to her, and to her sisters.
“Uncle Marc?” Alde whispered, tugging on her lower lip, the pupil of her left eye sliding towards her small, faintly hooked nose as she fought her body’s weariness, “Can I have -” A tiny snore escaped her pouting mouth.
Marc waited a moment, watching his charges. His brother had spoken of the “fierce love” a parent feels for a child: in these past months he had come to understand what Roland meant. He would kill for these three.
Beside him a female peddler, as gnarled as the sticks she carried for sale on her back, snorted and shifted closer to the central fire. Turning carefully so as not to disturb Isabella, Marc lounged on his belly, one hand absently rubbing his aching spine as he scanned the company.
Two and twenty figures, hunched in various attitudes of slumber, some snoring, most silent, were ranged about the fire, their dun and dust-stained clothes orange in its fading glow. Outside the ruined, roofless square fort – an old Roman castle, according to their escorts – he could hear the night-guards walking and talking softly. So far, the pilgrim party he was part of had journeyed in safety, although he slept with his sword close to hand. Even main roadways such as the one they traveled on were haunted by footpads, ever-ready to prey upon the unwary or unprotected. There were rumored to be horse-thieves hereabouts in these rough lands of the north and worse still, slavers.
He knew of one who would be a great prize to such creatures. Blonde – such fair eyebrows and skin must betoken blonde hair, although he had never seen so much as a strand of it: Sunniva was a modest girl who hid her tresses under a plain russet head square. Lithe, with a tumbler’s body: that much he could guess from her graceful walk, though her robe hung on her as if made for a larger woman. And her face… Marc smiled in the semi-darkness. Even at a distance, she was more than comely, she was spectacular, a prize –

Thank you again for having me at the Romance Junkies blog today. I am giving away a copy of A KNIGHT’S CAPTIVE  as a prize.