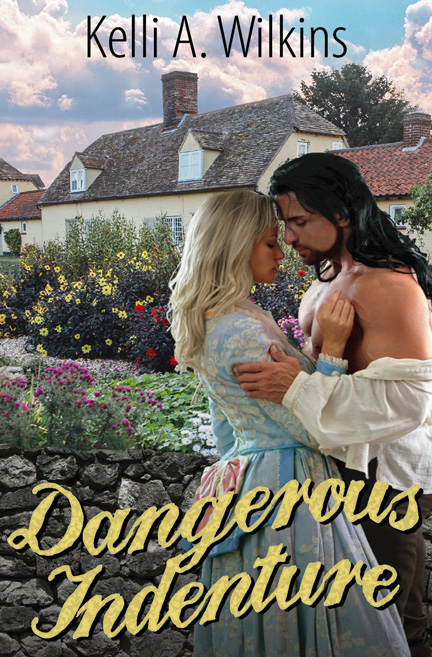 Today we’re chatting with Ashton Bailey, the hero from Kelli’s historical mystery-romance, Dangerous Indenture. Let’s get to know him better…

Q: Greetings, Ashton. Before we get started, could you tell readers about the book?

Certainly. Dangerous Indenture is a historical romance novel set in Colonial Pennsylvania. It blends romance with mystery and suspense. The heroine (Shauna) is an Irish indentured servant, and the hero (me) is a dashing gentleman… with more than a few problems. Here’s the summary and important links (whatever those are):

Indentured for five years… how long can Shauna resist her master’s son?

Desperate to escape her past in Ireland, Shauna Farrow signs on to become an indentured servant to Joshua Stewart, a wealthy man in Pennsylvania Colony. But a life of servitude quickly turns to drudgery, and Shauna’s hopes for starting over and creating a better life for herself are waning—until she meets her master’s roguish son, Ashton.

Ashton needs to redeem himself in his father’s eyes and earn the respect he has always longed for. Meeting Shauna turns his life around, and he sets out to win her heart. Torn between propriety and passion, Shauna struggles against her growing attraction to Ashton as long as she can.

But amidst their flirting, something dark stirs. Shauna soon discovers why no other servants wanted to work for the strange Stewart family.

Stewart House has an unsavory reputation: a previous servant died there under mysterious circumstances. When another servant goes missing in the middle of the night, Shauna is convinced that a member of the family is responsible.

Shauna’s investigation leads her close to the truth, and yet, she’s not sure who she can trust. Events take a deadly turn when she confronts the murderer and discovers the mystery of the Stewart family.

Will Shauna be rescued before time runs out, or will she meet with the same fate as the other servants?

Q: Tell us about Dangerous Indenture. How does the story begin for you?
The book opens with our new servant, Shauna, arriving from Ireland and settling into the house. She has left everything behind to work for my father, Joshua Stewart. For me, the story begins when I meet Shauna. I’ve been sent home to Stewart House in disgrace and I’m at a pretty low point. I’m drinking too much, womanizing too much, and basically hating my life. I didn’t want to return to Stewart House, but I had no choice.

Anyway, as I sat down to dinner, Shauna came into the room. The moment I saw her, I was glad I’d been sent home, because that meant I could spend time with her. Shauna was having a rough time serving dinner; my father was constantly scolding her and my despicable half-brother Colin was making her drop things, just so she’d get in trouble. I felt bad for Shauna because she was trying so hard to do a good job.

Over the course of the next few days I got to know Shauna a little better. She’s intelligent, strong-willed, has a temper, and is pretty damn courageous for coming to the Colonies to start a new life. I fell in love with her, and I swore I’d protect her while she was living at Stewart House.

I don’t want to go into too many details, but the house has a bad reputation, and my father couldn’t hire any local servants to work for him. A previous servant named Sarah Purdy was murdered and nobody was certain who did it.

Q: What was your life like before Kelli started pulling your strings?

Where do I start? I’ve been described as “a bit of a rogue” by people: I’m opinioned, have a biting wit, tend to be sarcastic… and yet, I’m utterly charming… when I haven’t been drinking too much at the local tavern. (Laughs.) Of course, these “good qualities” have driven members of my stuffy family utterly mad. They referred to me as the “drunken whoremonger with no sense of responsibility”—but I had my reasons.

When Kelli was writing about me, she was kind enough to see past all of my so-called faults and realized that deep down I’m a sensitive, caring individual who needed to find my way in the world. Meeting Shauna changed me for the better.

Q: Dangerous Indenture features several interesting secondary characters. What can you tell us about them?

Although everyone’s family has issues, the Stewart clan is probably more dysfunctional than most. The house is always filled with conflict or some sort of drama. My father, Joshua, is rather stern and has high standards. We don’t get along very well, and he sees me as a failure. My half-brother, Colin, is a vile beast, and his long-suffering wife, Minerva, is a little off balance (to put it politely). Adding Lila (a new servant) to the mix really stirs up things around the house and sets people on edge. Kelli has created quite a unique group of individuals! (And one of them might be a killer.)

Q: Yes, this is a mystery-romance… tell us more about the mystery elements of the book.
After Shauna learned that Sarah had been murdered, she was extra cautious when she was alone with Colin and Minerva. Minerva is a troubled woman, has fits of rage, and can be quite violent. Colin is a horrid excuse for a human being and is condescending and abusive to everyone in the house, even my father. We’ve certainly had our fair share of arguments and brawls.

I warned Shauna to be careful and not to be alone with Minerva or Colin. I didn’t trust either one of them, and for all we knew, one of them could have killed Sarah. Things were fine in the house for a while, until Colin convinced my father to hire Lila. Lila was more trouble than she was worth and caused even more problems for Shauna.

One night during a storm, Shauna heard a racket downstairs. There was lots of yelling and fighting. Come morning, Lila was nowhere to be found. Minerva told Shauna that she dismissed Lila in the middle of the night. Shauna was suspicious and started investigating… She suspected Lila had been murdered. I’m ashamed to say that none of us believed her—until it was too late.

I won’t give away the ending of the book, but I can reveal that Kelli keeps everyone guessing about the identity of the murderer up until the end. Readers follow along and figure out the clues as Shauna does, and there are many twists and turns.

Q: You have a lot of emotional and physical struggles in the book. Kelli put you through the wringer at times. How do you feel about that?
Well, I realize Kelli knows what she’s doing when it comes to writing a good story, but really? I had my fair share of heartache, self-doubt, depression, lack of purpose, and a few thrashings over the course of the book.

All the emotional baggage forced me to take a long hard look at my life and my choices and decide I wanted something better. I wanted to have a happy life with Shauna. She was my main inspiration for turning my life around. I wanted to prove to her that I was decent, respectable, and I could make something of myself. I also had to redeem myself to my father. He had a very low opinion of me and thought I was a worthless failure.

I also got the hell beat out of me on a few occasions and suffered a near-fatal accident toward the end of the book. And I confronted the murderer when I was in less than peak health. So, Kelli really made me suffer! I understand it was all for the good of the story, but still…

Q: Kelli has written a lot of romances in all genres in all heat levels. How does she switch back and forth so easily?

I’ve been curious about this myself, so I asked some of her other characters. Basically, each book comes to her in a different form. Sometimes an entire story “jumps” into her head, and she’ll know everything that happens to the characters. (It happened with A Deceptive Match, A Most Unusual Princess, Loving a Wild Stranger, and Four Days with Jack.)

Other times, she gets bits of the story and parts of the characters. Once in a while, she’ll have a character come first and then the other pieces of the book fall into place, like a puzzle. (It happened with Redemption from a Dark Past, Trust with Hearts, and A Secret Match.)

Before Kelli starts a book, she says she needs to know who the characters are and what’s going to happen to them. Then she outlines the scenes and starts writing. As Kelli writes, she explores things she hadn’t considered in her outline and might add entire scenes or write scenes that are later omitted. Writing a new book is always an adventure, and she never knows where the characters or stories will take her.

Kelli did an excellent job of blending romance, mystery, and even a bit of humor into this anything-but-boring historical romance novel. I’d recommend it to readers everywhere. I’ve also heard her other historical romances (such as Redemption from a Dark Past, Loving a Wild Stranger, and Love, Lies & Redemption just to mention a few), are excellent reads, as well. I’m looking forward to reading all of her romances. I want to see what other interesting characters she has created and follow their adventures.

Q: Tell us more about your author. Where can readers find her website/blog?

Kelli asked me to tell readers that she is an award-winning author who has published more than 100 short stories, 20+ romance novels, 7 non-fiction books, and 5 horror ebooks. Her romances span many genres and settings, and she likes to scare readers with her horror stories. She released two mini-mysteries in 2021: More Than I Bargained For and Silent Sentinel. Earlier in 2022 she published a full-length paranormal mystery-romance novel, In Another World.

Kelli says readers can visit her website www.KelliWilkins.com and blog http://kelliwilkinsauthor.blogspot.com/ to learn more about all of her writings.

Thank you for letting me chat here today. I hope everyone reads Dangerous Indenture and falls in love with me as much as Shauna has. If you missed any blog in this series, you can catch up here: https://www.kelliwilkins.com/blog