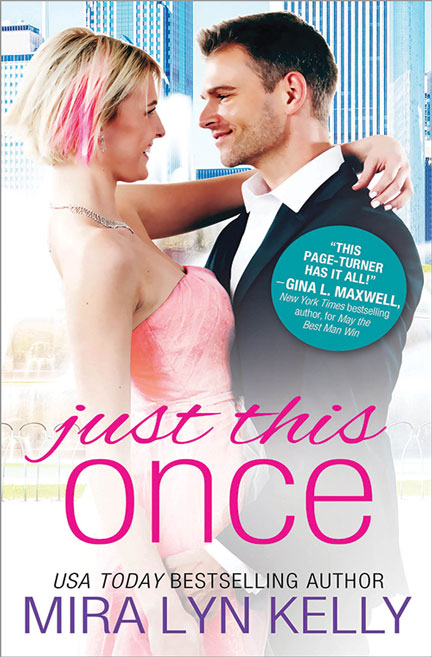 In Mira Lyn Kelly’s Just This Once, as heir to a chain of luxury hotels, Sean Wyse III always gets what he wants. So when he sees a freeloading roommate taking advantage of his spunky best friend, Molly Brandt, he doesn’t hesitate to step in. He kicks out the roommate…and moves himself in.

Molly loves quality time with Sean, but spending nights with him one wall away threatens to wake the crush she thought she’d gotten over… He can’t have her.

So he moves in with her…

As heir to a chain of luxury hotels, Sean Wyse III always gets what he wants. So when he sees a freeloading roommate taking advantage of his spunky best friend, Molly Brandt, he doesn’t hesitate to step in. He kicks out the roommate…and moves himself in.

Molly loves quality time with Sean, but spending nights with him one wall away threatens to wake the crush she thought she’d gotten over. A crush Sean knows nothing about, which might be a problem…considering how hard Sean’s been working never to think of Molly that way.

Sean took a step back and ran his hand through his hair, pausing when he realized the state of disarray Molly’d left it in. “You messed up my hair,” he accused, his grin telling her that he knew how much she’d liked doing it.

She shook her head, unable to play along. “You’re messing up my mind.”

The half smile fell away, and then Sean was stepping closer, his eyes going serious. “If this is about the dancing, Moll—”

“It’s not. It’s about you and me figuring out how to get past this inconvenient attraction and get back to just being friends.”

Sean sighed, looking relieved. “You’re right. I keep hoping whatever’s going on between us will go away on its own. That if we just ignore it, eventually it will stop being an issue.”

Molly nodded, then shook her head and stepped into Sean’s space. “Or maybe… Okay, I know this is going to sound nuts, and it probably is, but I was talking to Jill inside and…” And this sounded so stupid, she couldn’t believe she was even thinking about suggesting it, but then Sean ducked low, putting his face back into her line of sight and giving her that smile that promised she could tell him anything.

“Do you ever really wish you could have a doughnut, but you know you shouldn’t? Like you’re trying to cut back on bad carbs or processed sugar, or maybe they were just out of doughnuts when you went to the stand and you figured you’d just wait until you could get one another day, but then all day you think about the doughnut, because you didn’t just have it when you wanted it, so when you finally, finally see a chance to get the doughnut again, you make a really bad decision and buy, like, all the doughnuts they have and eat and eat and eat until you’re sick to your stomach and filled with regret?”

That endearing smile had left Sean’s face, but being Sean, he was taking her question to heart. He rubbed a hand along his jaw and cocked his head to the side. “No. I bust my ass at the gym so I don’t worry about carbs and sugar, and when I want a doughnut, I get one. And I mean, this sounds pretty obnoxious, but if I really want a doughnut and the stand doesn’t have one, I call down to Jerry, and I’ve got one in the next twenty minutes.”

Molly blew out a breath in a silent plea for patience. This guy ran the most successful hotel in the city, could do her taxes in his head, and knew the answer to every Jeopardy question every time they watched the show…and yet he couldn’t see where she was going with this?

“Say it’s a special doughnut and—”

Maybe she should have used an éclair.

“You’re the doughnut, Sean!” she snapped, exasperation wearing her thin. “You are the doughnut I’m craving. The one I keep thinking about when I’m supposed to be thinking of other things. You. And all I was saying is that maybe what we need to do is give in just a little. Have a taste to curb the craving… Before we crack and wake up surrounded by shredded Dunkin’ Donut bags and a bed filled with crumbs.”

Sean had stopped moving. Heck, he looked like he might not even be breathing, he was so still. Except for his eyes, which had gone dark and serious as they searched hers.

“Molly, what kind of a taste are you talking about?” he asked, his voice gone gravelly rough.

She swallowed past the anxious knot in her throat. “A kiss. Not more than a doughnut hole.”

His stare dropped to her mouth. “You’re talking about now? Here?”

She angled her head, taking in the setting. The concrete was cracked, and Dumpsters lined one side of the alley, while fire escapes hung overhead. She looked at someone’s discarded McDonald’s bag and nodded. “Yeah, this is probably perfect for our needs.” At Sean’s raised brow, she explained. “It’s not romantic, so I don’t have to worry about you getting caught up in some princess fantasy. We’re only semiprivate out here. While if we were at home, we’d have zero chance of getting interrupted.”

“Plus, the assortment of sexable surfaces on hand back at your place.”

“I know. Don’t get me started. But here, the atmosphere isn’t really conducive to going too far. You know what I mean?”

The muscle in his jaw bounced, and he met her eyes. “You worried about things going too far?”

He wasn’t? “No. But better safe than sorry, right?”

He moved a step closer, his single slow breath seeming to fill out his chest and broaden his shoulders. “Sure.”

She swallowed hard. “Honestly, it’s probably going to be gross when we finally do it.”

Sean nodded, close enough now for his hands to settle on her hips. “If you say so.”

Her hands met his stomach, her fingers briefly catching the fabric of his shirt before coasting up to rest lightly on his shoulders. “Just a taste,” she whispered, her lungs tight as their eyes met.

“Just enough to satisfy the craving,” he corrected, lowering his mouth to hers so slowly, she knew he was giving her this last chance to back out. Maybe she should have, but after all the years of wondering, being this close to knowing what Sean’s kiss tasted like was something she couldn’t back away from.