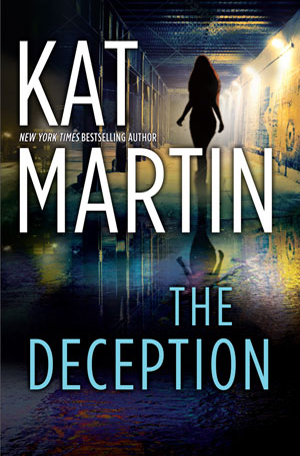 A guest post today from Kat Martin on a possible movie deal for BEYOND REASON! Kat Martin is a NY Times bestseller and author of THE DECEPTION. From Kat: In my latest Romantic Thriller, THE DECEPTION, book two of the Maximum Security series, Kate Gallagher is devastated when she learns her sister has been murdered. Determined to find Chrissy’s killer, Kate hires lethal bounty hunter, Hawk Maddox. Working together, they follow a trail of clues that lead them deep into the city’s underbelly. Though Hawk warns Kate of the danger, nothing he says can convince Kate to walk away.

THE DECEPTION AND A MOVIE DEAL!

As I was finishing the last few pages of upcoming novel, THE DECEPTION, Hawk Maddox and Kate Gallagher’s story, I got an interesting phone call.  I’m fortunate to be represented by a literary agency in New York as well as an agency in Hollywood.

Since I love movies, I’ve always wanted to see one of my books made into a feature film.  The Hollywood agency phoned about my novel BEYOND REASON.  The story is set in Texas, an action adventure that revolves around the rivalry between Carly Drake, who inherits her grandfather’s failing trucking firm, and powerful, multimillionaire Lincoln Cain, her number one competitor.

Worse yet, Carly needs Linc’s help to find the men who are willing to kill to keep her from making Drake Trucking successful again.

The transaction involving the rights was exciting from beginning to end, with David Haring at TinRes Entertainment making the offer, several agents negotiating the terms,and me thrilled to have a chance to see one of my books made into a film.  Most likely, the story will be a made-for-TV movie, but it is also optioned with the possibility of a major motion picture or TV series.  I would love to see 6’5” Lincoln Cain on a weekly TV show!

Once the deal was completed, I went back to work on THE DECEPTION, which is being released September 10th.  I hope you will watch for it and that you will also keep an eye out for Linc and Carly’s movie.  It takes years to complete a film but I promise to keep you posted on details as they come in.

Till then happy reading and all best wishes, Kat

It was eleven p.m. when Jase pulled up beneath the portico in front of Kate’s apartment building.  He’d considered picking her up earlier, taking her out to dinner before they headed back to Old East Dallas to find Lolliepop.  But until her sister’s murder was solved and he could pursue the attraction they shared, the less time he spent with her the better.

Kate stirred him up in ways a woman never had, arousing his curiosity about her, his protective instincts, his heretofore unknown possessive nature, sure as hell arousing his libido.

When he was with her, half the time he walked around with a hard on.  She was trouble he really didn’t need, and yet he had promised to help her find her sister’s killer.  He was determined to do that no matter what it took.

He glanced through the glass front doors into the lobby as Kate stepped out of the elevator, breathed a sigh of relief that she wasn’t wearing her hooker garb.  Instead, she wore a scoop-neck pale blue top and black jeans tucked into low-heeled, knee-high black leather boots.

He almost smiled.  Maybe she figured the boots would be easier to run in if she needed to make another quick getaway.

Kate jerked open the SUV door.  Her long blond hair, woven into a single thick braid, swung across her shoulders as she slid into the passenger seat.  He itched to wrap a hand around that sexy braid and drag her across the seat into his lap.  Damn, the woman turned him on.

Reminding himself to behave, Jase started the engine and drove out from beneath the portico, continuing down the road to Old East Dallas.  He glanced over at Kate.  She looked tired.  But then, bar fights with an army of drunks had a tendency to wear you out.

Kate sighed.  “Andrew came by to see me.”

Jase tensed.  He didn’t like Andrew Bradley.  He liked him hound-dogging Kate even less.  “What’d he want?”  As if he didn’t know.

“He asked me to go to the Dallas symphony on Saturday night.  Mozart’s Piano Concerto.”

He cocked a dark eyebrow.  “You into that kind of thing?”

Jase smiled, told himself he didn’t feel a sweep of relief.  “Good to know.”  His gaze slid back to the road.  “So you going out with him?”

“Hell no.  Been there done that.  Not interested in doing it again.”

“What about you?” Kate asked.  “Make any progress on the case?”

He hit his turn signal and passed a beater Toyota loping along the road in front of him.  “Tabby called.  Came up with three names, guys arrested for assaulting prostitutes.”  He told her how he’d already tracked the location of one the men and planned to see him tomorrow.

She’d told him from the start she wanted to be involved.  Talking to a suspect shouldn’t be as dangerous as going to Mean Jack’s or even as risky as what they were doing tonight.  Shouldn’t being the key word.  You never knew what could happen when you were dealing with scum like these.  On the other hand, a deal was a deal.

It wasn’t long before he was cruising the same street they had been on last night.  Mean Jack’s was up ahead, the lot more than half full.  Next to it sat the Sunshine Station, gas and convenience store, a rundown, glass-fronted structure with a wide awning out front that extended over a pair of outdated gas pumps.  The Sunshine Motel sat behind it.

Tall lampposts in the parking lot cast light on a pair of rough-looking men who leaned against the gas station wall smoking cigarettes or maybe joints.  At the moment, there were no women around.

Jase pulled up to one of the gas pumps and turned off the engine.  “I don’t see anyone in the store except the guy behind the counter.  I’ll gas up while you go see what you can find out.”

She looked surprised he would let her go in by herself, but he’d rather be outside where he could keep an eye on things.  He used his credit card to start the pump, jammed the nozzle into the tank, and began filling up.

He glanced over at the men, didn’t like the looks of the big dark male, clearly not a customer, who appeared to be waiting for someone.  He didn’t like the tall, skinny dude beside him any better.

But then pimps were never his favorite people.

As Kate walked toward the convenience store, the Texas night was warm and damp, a moist wind drifting over the landscape.  Beyond the glass door, the interior of the store smelled like lube oil and cloying perfume.

Kate walked over to the Coke machine, filled a cup with ice and Diet Coke, then went up to the counter to pay for it.  Her eyes widened at the sight of a fishbowl filled with foil-wrapped condoms.  A sign on one side read FOR SALE $.50 CENTS.  Her gaze flashed to the man behind the counter, narrow-faced, with fine brown hair and a bald spot at the back of his head.

Her stomach tightened but she managed to smile.  “I’m looking for a woman named Lollie.  I hear she works in the neighborhood.”

His filmy blue eyes slid over her like cold grease.  “I wouldn’t have picked you for the type.”

It took a moment to realize he thought she wanted a sexual encounter with a female.  Kate raised her chin.  “I didn’t see any women outside.  Do you think she’ll be here tonight?”

“So eager.”  A lecherous grin curled his lips.  “Maybe a man can give you what you want.  I’d be happy to try.”

Her irritation grew.  She propped her hands on her hips and drilled him with a glare.  “I asked you a question.  Do. You.  Know.  If.  Lollie will be here tonight?”

The guy seemed to wither.  “Take it easy, okay?  Lollie’s here most nights, sometimes she works somewhere else.  You never know with a whore.”  He flicked his unshaven chin toward the door.  “You can ask Snoopy–the tall, skinny guy outside.  He’s her pimp.”

The man she’d seen when they drove in.  Had her sister been one of Snoopy’s women, too?  It made her sick to think of it.  But if it were true, he could be involved in her murder.

Bio: New York Times bestselling author Kat Martin is a graduate of the University of California at Santa Barbara where she majored in Anthropology and also studied History. Currently residing in Missoula, Montana with her Western-author husband, L. J. Martin, Kat has written sixty-five Historical and Contemporary Romantic Suspense novels. More than sixteen million copies of her books are in print and she has been published in twenty foreign countries. Kat is currently at work on her next Romantic Suspense.