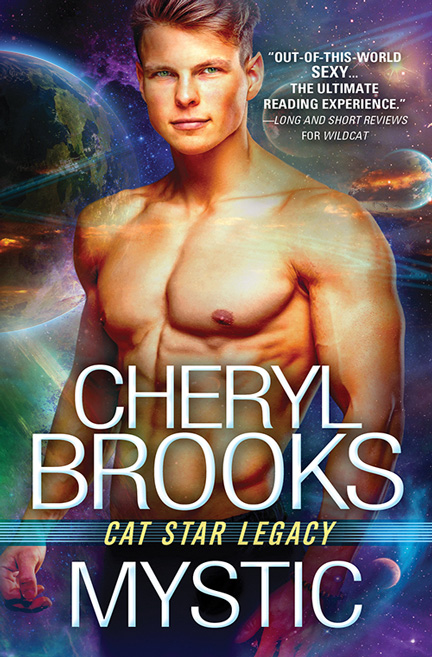 Her love is the one thing he never saw coming…

Sulaksha Enduran is still reeling from the death of her lover. He died of a mysterious plague—and it’s out of control. Sula is determined to find answers on her own, until an impossibly sexy Zetithian saves her life and joins her quest.

Despite the prescient abilities and power over the wind that enable Zetithian mystic Aidan Banadänsk to rescue Sula from certain death, he couldn’t have predicted her unique effect on him. It shrouds her future in mystery…and fills him with unparalleled desire. Her love is the one thing he never saw coming…

Sulaksha Enduran is still reeling from the death of her lover. He died of a mysterious plague—and it’s out of control. Sula is determined to find answers on her own, until an impossibly sexy Zetithian saves her life and joins her quest.

Despite the prescient abilities and power over the wind that enable Zetithian mystic Aidan Banadänsk to rescue Sula from certain death, he couldn’t have predicted her unique effect on him. It shrouds her future in mystery…and fills him with unparalleled desire.

But Sula’s investigation has put her in the crosshairs of a deadly conspiracy. With an entire planet’s population at stake, Sula and Aidan must risk it all to save the planet, the galaxy…and each other.

Cheryl Brooks is a former critical care nurse and is the author of the ten book Cat Star Chronicles series. Maverick is the first book in her new Cat Star Legacy duo featuring the next generation of Zetithians. Cheryl resides with her husband, two sons, two horses, three cats, and one dog in rural Indiana.

Upon reaching her side, he recoiled immediately when he spotted what he took to be a snake but was actually a leather bullwhip.

He almost laughed aloud. “Who do you think you are? Indiana Jones?” Upon closer inspection, her outfit was exactly the same as that worn by the fictional archaeologist. For trekking through the mountains, such garb was quite practical, although the resemblance to “Indy” ended there. She was small and undeniably female, with shiny black hair that had been braided back from her face and pinned into a twisted knot at her nape. His gaze swept over her exotically beautiful face, taking in the rich brown of her skin, the fullness of her lips, and the lovely arch of her brows.

Given his feathered wings and long, golden curls, her assumption was reasonable enough, although not many people believed in angels anymore.

Then again, he hadn’t said whether he was an angel. He’d only claimed he wasn’t planning to take her to Raj.

Pain soon expunged any doubts from Sula’s mind. Had she been on her way to the afterlife prior to being reincarnated into another form, she doubted the body of her current life would’ve troubled her quite so much. Therefore, he was no angel—certainly not like any angel she’d ever heard about.

Nor was he like any living being she’d ever seen. A man with pointed ears, feline eyes, and enormous wings? Unless the wings weren’t real. They’d certainly looked real when he’d been sailing through the sky above her. Plenty of black and gray white-tipped feathers, arranged row upon row like those of a bird. Or was she confusing him with the birds in the cave? In the short time before she’d passed out, she’d seen drawings of them on the cave wall, being hunted by primitive humanoids. She’d finally found the evidence she’d been searching for.

The question was, could she ever find it again?

The warm sunshine beating down on her face was proof enough that she was no longer in the cave. She wasn’t lying in a pile of stones, either. The ground beneath her was relatively soft, and a gentle breeze carried the fragrance of fresh, green grass to her nose—a smell quite unlike the dank odor peculiar to caves, particularly those inhabited by birds.

Her leg still pained her, although she could tell that it was at least lying straight. The initial shock of the break that had brought on her fainting spell had passed. She was thirsty, almost to the point that her tongue seemed cemented to the roof of her mouth. An attempt to moisten her lips failed.

Within moments, a hand slipped behind her head, and a cup was held to her lips. As the cool water soothed her parched mouth, she recalled doing the same for Raj in the last hours of his life.

She’d been helpless to prevent his death or even ease his suffering. The aftereffects of the disease were nearly as bad. Within hours, even his body was gone; nothing remained of him aside from the clothes he’d been wearing and a pile of dust that was soon scattered by the wind.

Surrounded by an eerie silence, she’d returned to their ship. Purely out of habit, she’d gone through the decontamination process. The scanner proclaimed her to be free of disease, although she hadn’t been sure she could trust even that. She and Raj had gone through a similar process prior to their departure, and yet Raj had been among the first to fall ill. They’d had minimal contact with the natives, observing rather than interacting with them directly. Granted, they’d barely begun their study before Raj began to feel sick, but on the whole, the natives had seemed industrious and intelligent and appeared to live together in relative harmony. Rather strange in appearance, perhaps, but that was to be expected.

Not nearly as strange as her rescuer. Despite being somewhat afraid to take another look, she opened her eyes a teensy bit.

The wings were gone.

So they weren’t real after all.

The long golden curls remained, as did the peculiar eyes. Rather than the usual dark, round pupils, his were vertical slits that emitted a soft, golden glow. His ears came to a point like those of a storybook elf, and a pair of straight brows slanted up toward his temples.

“Glad you’re awake,” he said. Then he smiled, revealing his sharp fangs.

A scream had nearly left her throat when she remembered something from her studies that caused her to gasp instead—a textbook description of a nearly extinct species of feline humanoids.