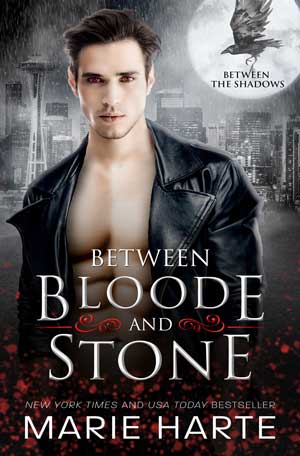 Hecate’s secret weapons are those Of the Bloode—vampires. Though they refuse to worship anything but themselves, she loves their wild ways. In order to battle gods and monsters and survive, they’ll need ferocity, inner strength, and something to fight for. Because there is nothing so dangerous as a predator who loves, and those Of the Bloode protect what’s theirs at all costs, in undeath and beyond.

The first in a brand new series of vampire paranormal/urban fantasy romances, BETWEEN BLOODE AND STONE pits vampire against vampire, with a little help from the fae, a goddess, and a clan of killers.

This series is super fun to write because the world of the vampire is complex.

In Varujan’s book, we see him nearly killed by a strange “human” who turns out to be something else entirely. Enter enemy vampires, fae, gods and witches, and you have a dangerous romance brewing, one that might have a happy ending if the enemy doesn’t kill them first.

And of course, someone has to be in charge of all the vampires. Enter the goddess Hecate and her servant Mormo, who seems constantly annoyed with all the blood-drinkers. 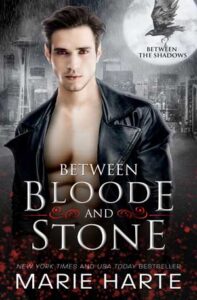 Take a sneak peek at an excerpt!

With a speed no human could match, Varu tracked his prey inside and waited, seeing clearly in the darkness. The attack came from the deepest shadows. It was fast and furious but no match for Varu. He manhandled his prey and easily grabbed him by the throat off his feet, yet his prey’s hood remained in place, concealing his features. Curious that his attacker was somewhat smaller than he’d expected, Varu studied the male, at least a good head smaller than Varu and slighter of form.

A teenager or young man, perhaps? No, make that, a young woman. He noticed the slight swell of breasts at the same time he drew in her scent. It burst on his tongue and caused instant elation. So very strange. He frowned, but as the sweet, sultry taste of her wound around him, his fangs grew, hunger bursting through him from head to toe. He let go of her neck and gripped her by the shoulders, continuing to keep her off her feet a few inches from the ground.

He needed to see the face that went along with that scent. Like the finest perfume… except she didn’t exactly smell like prey.

The longer he held her, the less he felt like draining her. His body woke up, his fangs not the only thing growing large.

Orion yelled something outside. Distantly, as if dreaming, Varu glanced through the bay window to see Orion punch two men hard enough that they flew into a brick wall and slumped to the ground in the alley. Then he engaged with what looked like a lycan.

Kraft snarled at something that snarled back. Then he started hitting and biting and moved out of sight. More noise outside, then a cough distracted him. Varu looked back at the female, peering at the unnatural darkness under her hood. He thought he could make out her eyes. A silver glow appeared and brightened.

Then she was petting him, and he sighed with pleasure.

He lowered his arms, setting her on her feet. And then he was no longer holding her, his arms by his sides. He blinked, feeling silly. He’d missed what she’d said. But…

A lovely laugh that made him smile in return broke the silence between them.

“Oh, I’ll be the toast of the town when I return with upir gold.”

Upir gold? He should know that term.

A small but gracefully shaped hand with trimmed red nails trailed his forearm to his shoulder. She reached up to touch his hair, rubbing the black strands between her fingers.

“So soft. Who would have thought?” Her voice sounded like the tinkle of wind chimes, magical and soothing. So sweet.

She leaned closer, and he scented that delectable perfume again. The one that made him hungry for something other than food.

Her finger caressed his throat.

The touch of a stranger against the most vulnerable part of him shocked Varu out of his stupor. Wait. Had she said upir gold? Considered a delicacy in many parts of the divine world, and a bountiful harvest to those who dealt in power and sacrifice, a vampire’s bloode and brains—upir gold—could fetch a pretty penny.

He snatched her hood back, exposing a female with long black hair threaded with white streaks. Her eyes were lavender, the sclera a small presence of white, the irises glowing, her pupils, a darker purple, overly large. Her face was inhumanly beautiful. The pearlescent shine to her skin, a lovely shade of light gray—no, a pale cream color, he thought as the moonlight streaming through the window changed—emphasized her plump, blood-red lips and rosy cheeks lush with life. He could hear her heart racing, the evidence of her vitality intoxicating.

Yet for all that, she wore nothing out of the ordinary, just jeans and a hoodie and sneakers. So plain and uninteresting.

Overwhelmed by a confusing sense of lust and danger, he started to lean forward, unable to help himself.

The dagger she thrust at his throat had him springing back several feet with a snarl, flashing his fangs. How the hell had she surprised him once again?

Instead of being properly intimidated, she narrowed her eyes and threw the dagger at him.

He hadn’t expected her to throw with such speed and accuracy. The damn thing nearly severed his head from his neck and bounced off the wall behind him.

Done playing the fool, Varu retaliated immediately, launching himself and tackling her to the ground. He pinned her down while avoiding her stare, since she’d earlier beguiled him into letting her go.

“Get off me, blood-sucker.” Several more swears and insults to his lineage followed, her voice husky with anger, no longer so airy and musical.

He grinned at the epithets, not at all offended. Instead he found himself intrigued. It had been so long since he’d had anything to smile about.

You can find Between Bloode and Stone at any of these retailers:

And to be entered to win a print copy (U.S. only due to shipping)  of BETWEEN BLOODE AND STONE, simply comment on this post. If you could be any kind of magir (magical creature), what would you be? Vampire? Lycan? Mage? Druid? Monster? Anything else?