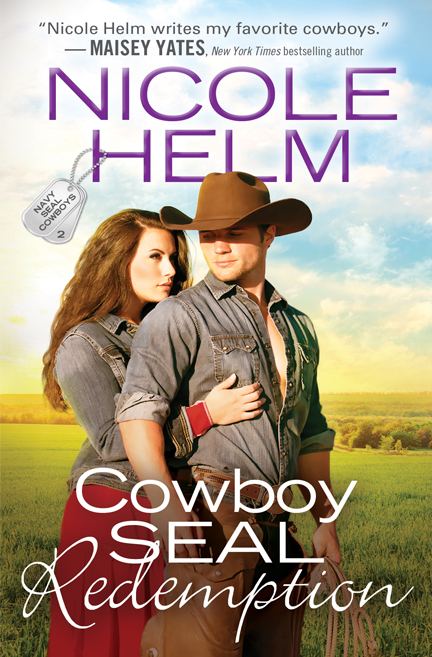 Jack Armstrong’s been slowly piecing his life back together after a career-ending injury bounced him from the SEALs. The only trouble is, his family’s on their way to his new haven in Montana…and Jack refuses to let them know he’s still hurting. Desperate, he makes a deal with local bad girl Rose Rogers: in exchange for some extra security, she’ll play the perfect loving girlfriend.

Rose doesn’t trust any man, much less some tough-as-nails former SEAL. But the more they settle into their ruse, the more things start to feel real, and the more Rose’s true fear surfaces—that she’ll never be good enough for love. But Jack isn’t about to lose Rose. He’s done running when things get tough, and he’s determined to prove—once and for all—that even the most troubled hearts can find their way to redemption.

“Remember when you said you weren’t any country I swore to protect? Well, I’m not some sob story you need to soothe your conscience with,” Jack said.

“That’s not what I’m doing,” Rose returned through gritted teeth, because maybe he wasn’t too far off the mark. She didn’t exactly see him as a sob story, but there might have been a flash of truth she recognized in the whole soothe your conscience bit.

“Then what are you doing?”

“I don’t know,” she threw back at him, frustration and guilt and some other thing that felt a whole lot like panic fluttering in her chest. What was there to panic over? What did she care if Jack took off? They were maybe friends at best, and he’d just made it clear he was coming back. Panic was nonsensical. Frustration was pointless. Guilt was…

“Seems to be a theme,” he murmured, his voice suddenly soft. “Not used to that, are you?”

She wanted to tell him he didn’t know her, but she couldn’t form the words, couldn’t push them out of her mouth.

“Me neither,” he said, as if she’d agreed instead of remained silent and still. She felt his fingertips on her cheek, hot and rough against the cool of her skin. A gentle caress.

He was touching her like something delicate and precious, and her breath got all tangled in her lungs. She swallowed, trying to find some sense of power, some sense of her usual cool detachment.

“W-what are you doing?” Had she just stuttered that question? Unacceptable. Rose Rogers didn’t stutter.

“I thought we established I don’t have a clue what I’m doing, so it might as well be this,” Jack returned, his voice a dark rumble.

And in the dark night, like so many of her dreams lately, Jack’s mouth was on hers. Hot and somehow demanding. None of the timid, only-been-with-one-girl stuff she might have imagined.

His beard was a rough scrape against her chin and his tongue a velvet whisper across her lips, and no matter the little voice in her head telling her to stop this before it hurt them both, she opened her mouth for him.

His tongue swept in, and everything inside her shut up and hummed with a pulsing life. It might have been dark around her, but she felt like a beacon of light, like the center of something. And when Jack’s warm hand slid behind her neck, cupping it firmly, as if she was somehow his to cherish and protect, everything inside her simply loosened and relaxed in a way it never, ever had.

That was quickly followed by a bolt of panic so hard and so potent, she pushed him away. It was only then she realized she was shaking, maybe shaking apart, against the brick wall of her bar.

Her bar. Her power. She was in charge. She was…

She pushed away her father’s voice, pushed away everything except the feel of the cool, rough brick behind her back. This was her center, this rough-and-tumble, hole-in-the-wall bar she’d worked her ass off for the past few years.

She took a deep breath in and a deep breath out, almost able to laugh at the fact that she could hear Jack doing exactly the same thing.

“Okay,” he replied, his voice frustratingly devoid of any readable emotion.

“I imagine sex would be great too.”

“I would imagine,” he replied blandly.

“I need you to understand something, okay? You’re not disposable, but I’m not…good guy material. I’m attracted to you, God knows, and I’d even break a few personal rules and sleep with you, but that’s all it would be.”

“Did you think that kiss was me asking for a pity fuck?” And there was a hint at some emotion—rage or wounded pride or both.

“No. No, that’s not what… Look, guys like you do not have relationships with foul-mouthed, tattooed bar owners.”

“Yes. Good, upstanding—for heaven’s sake, you were a Navy SEAL, engaged to the girl next door that your family expected you to marry. You’re like an American fairy tale. Let me tell you, a princess gets that guy. Not me.”

“Did you mistake me kissing you for a marriage proposal?”

She blew out a breath and something almost like a laugh. “No. But… One woman. You’ve had one lifelong relationship, and I just need to be clear that this ain’t going to be that. This can be something temporary and fun, but nothing like a relationship. That’s not what I’m after.”

He was quiet for the longest time, and it was stupid to hold her breath or worry. Of course he would take it. It was sex without strings. It was the modern American Dream.

But Jack never seemed to do the expected thing.

“Leave it,” he replied, a firm, commanding response that brooked no argument.