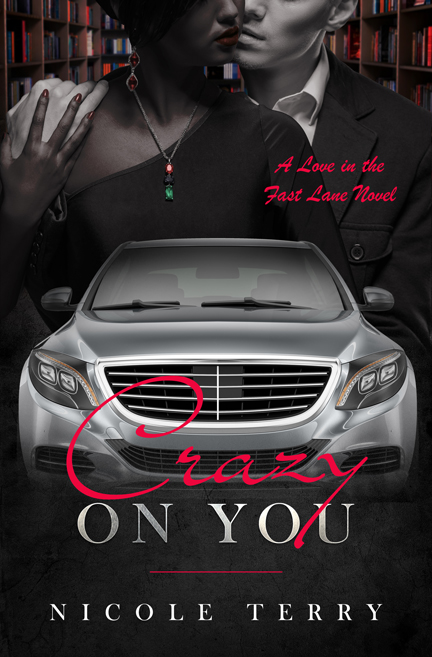 CRAZY ON YOU by Nicole Terry.

Diane Thompson wakes up after a night of celebration to the realization life isn’t all margaritas and donuts.  Now she needs help navigating her way out of the darker side of her small town. Police lieutenant Cole Anderson is willing and more than able to help but he has a price—for Diane to stop running and finally be his.

And in no way, was I disappointed.

Baby’s a man after my own heart. I mean, come on, he uses music to navigate his everyday life but especially while driving.

I never start a trip without headphones and a loaded playlist. Depending on the mood and length of the trip, I can have mellow songs that help get me through rush hour traffic, short songs with loud bursts to help me get ready for work. Even solely instrumental tracks to help plot a difficult scene. (I’ve plotted many scenes behind the wheel, let me tell you.)

However, in honor of Baby and his sweet evade and escape tunes, here are five songs from my playlists that could double as getaway car tracks.

(NOTE: Please don’t run from the police unless ABSOLUTELY necessary. They really don’t like it. And if it is absolutely necessary, you better have a damn good excuse planned and ready for when they hunt you down and slap the handcuffs on you.)

All hail the Zep! Led Zeppelin is one of the best rock bands of all time. The opening gives you a breather before plunging into guitars and Plant’s voice encouraging you to throw yourself in the car seat and go, go, go!

Need to go from zero to sixty in mere seconds? Hit play on this! It bursts open at top speeds and doesn’t let your heart or your foot on the gas ease up. (Also, your blood pounds so much it should burn calories IMO. Or at least that’s how I see it!)

Need a song to bob and weave in and out of traffic? Try this one. The music is twisty and turn-y with just enough beat to have your hands (and, by happenstance, the steering wheel) taking turns on a dime. And the louder you turn it up, the less likely you are to hear the helicopters that may (or may not) be trackin’ you.

I love this song and not just because the opening sample is from Rock Lobster by the B-52’s. It’s because it talks about a party that explodes into craziness. It goes from slow, to fast, to wonky, then back to fast. It’s the perfect song for getting the blood pumping and the foot tapping on the gas. (Frankly, the whole album is freakin’ sweet, one of the few I can listen to beginning to end without skipping songs.)

This song actually made it into the book. There’s a bass guitar riff that’s iconic. Particularly in movies with high-speech chases and squealing wheels and a moment of silence where you think things are going to get better before the BOOM drops. I needed to a song to get my heroine’s mind focused. She was in a mini-van, rolling down the street when this big SUV rear ends her and… well, I’ll let you read to see how it goes. 😀

Want more awesome tunes and crazy driving? Be sure to check out my new release CRAZY ON YOU, out today. Like Baby, my heroine Diane uses music to navigate her crazy life, except this time it’s kidnapping, drug dealers and a sexy cop determined not to let her ignore him and his help. Diane Thompson wakes up in the backseat of her car, shocked to find she’s acquired a chauffeur. Realizing she’s been inadvertently kidnapped, she swears off tequila—and Chili’s—then dials 9-1-1. But her rescue comes at a cost. Her savior, too-macho-for-words Lt. Cole Anderson, refuses to let Diane out of his sight until her kidnappers are apprehended. He’s already lost one woman he cared about due to his inattention; he’s not letting it happen a second time.

But Diane isn’t a damsel-in-distress type of girl. When it turns out the criminals left a valuable item in her car and they want it back, involving Cole isn’t part of her plan and not only because the criminals have forbidden her from involving the cops. Men are like birds—messy, easily distracted, and only around when there’s something to eat. She’s got this. All she has to do is find and return the item in question to the drug runners threatening her life, survive a high-speed car chase, and keep her vow to never trust a man with her heart.

Leave it to me to fall asleep in the back of my car…and wake up kidnapped.

Deep voices blended into the rumble of the engine. It stuttered and shimmied before settling into a whining rest that rocked all the way to the carpeted back seat where I hid.

My eyes scrunched tight and my heart wanted to curl up and sploosh out of my chest like the last vestiges of toothpaste in the tube. Sweat trickled down the valley of my boobs and ended in the dip of my thighs.

Buried under material, each pant of breath seared my nostrils as fresh oxygen was replaced with the sour smell of the good times I’d enjoyed at dinner. Intended as donations for Goodwill, the clothes and blankets would apparently now become my funeral shroud.

Most people could escape a bad dream once they woke up. It was my luck to discover reality was the true nightmare.

A low squeal of tires pitched me forward. Cloth fibers scraped against my cheek and shoved my glasses against my forehead. My stomach swished, a wave of nausea crashing and receding against the back of my throat. Only the grace of God and a large trash bag full of clothes breaking the fall of my face kept me from moaning and drawing the thieves’ attention.

I swallowed, plastic and acid bittersweet on my tongue. Whoever had said the root of all evil was money had never indulged in a bottle of Jose Cuervo.

“This car is trashed.” A male spoke, tone somewhere between a two-packs-a-day habit and the wheezing of a sinus-infected bulldog. A pause. Then, “What’s that smell?” The rough crunch of paper. “Probably whatever’s in this crusty old Burger King bag.” This voice wasn’t as deep and gravelly as the first, but still belonged to a dude.

People were in my car. Strange, judgy people at that. I’d end up an episode of Nancy Grace. Just like Mama had always warned.

Residing in the Southern part of the United States, Nicole Terry writes romances the way she lives: awkwardly, filled with humor, heart, and hijinks. Crazy on You is her first book. Connect with her on Twitter @AuthorNicTerry.

2 Responses to Nicole Terry–Crazy on You