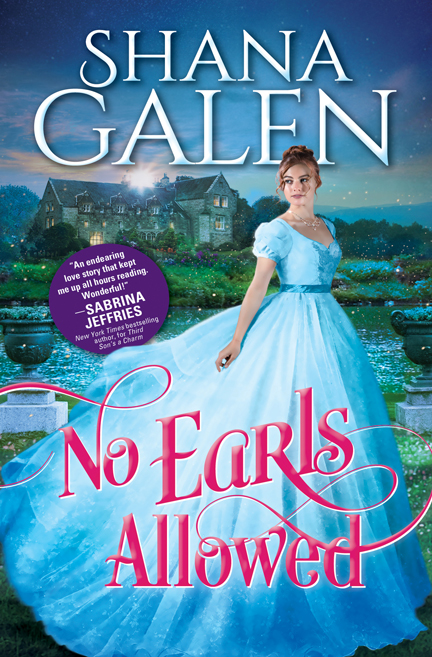 NO EARLS ALLOWED by Shana Galen.

It is a truth universally acknowledged

that a lady can do anything a man can do:

backwards and in high-heeled dancing slippers.

Lady Juliana, daughter of the Earl of St. Maur, needs all the help she can get. She’s running a ramshackle orphanage, London’s worst slumlord has illicit designs on her, and her father has suddenly become determined to marry her off. It is a truth universally acknowledged

that a lady can do anything a man can do:

backwards and in high-heeled dancing slippers.

Lady Juliana, daughter of the Earl of St. Maur, needs all the help she can get. She’s running a ramshackle orphanage, London’s worst slumlord has illicit designs on her, and her father has suddenly become determined to marry her off.

Enter Major Neil Wraxall, bastard son of the Marquess of Kensington, sent to assist Lady Juliana in any way he can. Lucky for her, he’s handy with repairs, knows how to keep her and the orphans safe, and is a natural leader of men.

Unfortunately for both of them, the scandal that ensues from their mutual attraction is going to lead them a merry dance…

EXCERPT:  In this scene, Lady Juliana must deal with a local crime lord who threatens her and the orphanage she loves. Fortunately, she’s saved, for the moment, by a handsome guest.

His hand came down hard on her shoulder, and she flinched from the feel of his leather gloves on her bare skin. “Allow me to remind you, Lady Juliana. I offered you my protection.”

“Thank you very much.” She slid out of his grip. “Now, if you will excuse—”

“Stop playing games. I am a man of business, and you are not a stupid woman. There are dangerous men about, and you and the children who live here need a protector.”

Julia didn’t need to translate his words. He was the dangerous man.

“I am offering you my protection for a small fee.”

Small fee? “I do believe you mentioned one thousand pounds, Mr. Slag. That is no small fee.”

“Your father is an earl.”

“Yes, and most of his money is tied up in lands.”

“There is another option.” He moved closer, his round belly brushing against her dress. “You can pay the fee by offering me a place in your bed. You’re an attractive woman.” His gaze slid to her breasts, making her skin itch. “And even the gentry like a bit of slap and tickle. What do you say, Julia?”

Though abhorrent to her, he made the proposal in earnest. He probably thought it more than fair, and if she had been another woman she might have agreed without blinking an eye. Her father had tried to marry her off to men ranging from elderly to lecherous. What did Slag propose but a similar arrangement without the permanence of the vows?

But Julia had not come to Spitalfields to end up some man’s plaything. She could have stayed home in Mayfair and become a kept woman. Which meant her answer to Slag was an unqualified, Never. No! Not ever.

But one did not say such things to Mr. Slag and walk away with one’s brains intact. Julia liked her head round, not smashed flat on the carpet. And so she smiled and chose one of the many phrases she knew and had used in the past on the sons of dukes and viscounts and lowly barons. “Sir, you flatter me with your proposal, but this is all so sudden.”

“Then maybe you just need a bit of persuading.” He reached for her, and she took a step back. Dear God. She dearly hoped this would not turn into him chasing her about the parlor. And why hadn’t she seen this coming? The problem was that she spent only part of the week within the walls of the St. Dismas Home for Wayward Youth—er, rather Sunnybrooke Home for Boys, as she had renamed it. And during that time she was so absorbed with the problems of the boys and running the orphanage, she had no time to consider how to deal with Mr. Slag. And when she might have snatched a moment to deal with the problem, she had to return to Mayfair to be thrust into the world of the ton, and then Slag and Sunnybrooke seemed so far away.

But Slag was not far away now. He was far too near and her strategy of ignoring him and hoping he’d go away would not work this time.

She took another step back, and he followed, but she was saved from running behind her desk when someone tapped on the parlor door.

The door opened to reveal Mr. Goring. “Sorry to interrupt, my lady.”

“Not at all, Mr. Goring. Come in.” She crossed to him and pulled him inside. “You should join us.”

He frowned at her as though the ways of the upper classes were foreign and mysterious to him. “You have another caller, my lady.”

Julia frowned. Another caller? Who on earth would be calling on her here? “Do you know the caller?”

“No, my lady. He says it’s a matter of—what was the word?—urgency.”

He? Then the thought struck her. It was a representative from the bank. Perhaps the board had made good on its threat not to pay the mortgage and the bank had come to close her down.

“Tell him to come back later,” Slag ordered.

“No!” Bank representative or no, whoever it was would be an improvement on Slag. “Show him in, Mr. Goring.”

Goring looked from her to Slag.

“Maybe I should come back at a more opportune time,” Slag said.

“Please do, Mr. Slag. I am so sorry we were interrupted.”

“May I call on you tonight?”

He lifted his stick then crossed to her and took her hand. At some point during their little dance, he’d removed his gloves, and as she’d removed hers in the kitchen, the press of his bare fingers on hers made her throat tighten.

“You can’t put me off forever, Lady Juliana,” he said softly. “Lest you forget, I’m a man who gets what I want. And the longer you make me wait, the more I want.”

With that he strolled out of the room, jostling the man entering. The two stopped, looked each other up and down, and then with a warning glare, Slag went on his way.

The other man watched him, then strode into the room. “Friend of yours?” he asked.

Julia let out a breath then caught it again. She blinked at the man before her, but she had not dreamed him. He was better than any dream her mind might have conjured. It was as though he had just stepped out of a painting depicting a god or an angel. He was tall but not so tall she had to crane her neck to look up at him, and he had olive skin with a touch of gold. His thickly lashed eyes were the most beautiful shade of blue she had ever seen. She had never been to the Mediterranean Sea, but this was what she imagined the waters would look like. His hair brushed his collar, the thick waves falling about his face. With a cupped hand, he brushed them back in what must have been a habitual gesture, then seeming to remember his manners, bowed to her.

His bow and the attention it drew to his clothing told her everything she needed to know. This man was no crime lord. He was of her father’s ilk. Her ilk, when she was playing the part of Lady Juliana in Mayfair drawing rooms. His dark coat fit snugly over broad shoulders, his cravat was snowy white against bronze skin, and his breeches strained quite nicely over muscled thighs…

She tried to speak over the pounding of her heart. “You will forgive me, sir, if I do not recall having met you before.” She hadn’t met him. If she’d met him, she would not have forgotten.