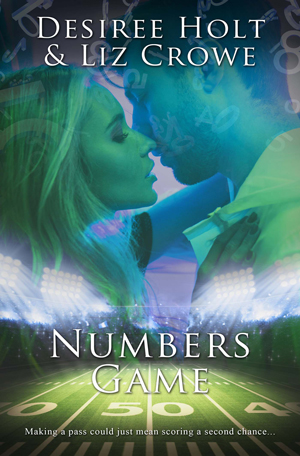 Making a pass could just mean scoring a second chance…

Former NFL player and coach Duncan “Hatch” Hatcher fumbled his career and marriage. Now divorced and ready to tackle his future, he has an opportunity to redeem himself as coach of his college alma mater’s football team. But how can he can turn the team’s losing streak around and keep the secret of his downfall buried when the school agrees to a documentary that will allow a lovely journalist to dig her way into his past…and into his heart?

Making a pass could just mean scoring a second chance…

Former NFL player and coach Duncan “Hatch” Hatcher fumbled his career and marriage. Now divorced and ready to tackle his future, he has an opportunity to redeem himself as coach of his college alma mater’s football team. But how can he can turn the team’s losing streak around and keep the secret of his downfall buried when the school agrees to a documentary that will allow a lovely journalist to dig her way into his past…and into his heart?

Olivia Grant’s ex-husband almost wrecked her journalism career while he definitely did a number on her self-esteem. The documentary on Duncan Hatcher is the perfect way to rebuild both. As a freshman in college, she’d had a crush on the senior football hero, but he hadn’t known she existed. She never expects the sparks that fly between them as they work on the project nor the struggles they must face if they both want to win.

Now the video she produced about Hatch’s comeback is nearly finished, although there are still some pieces she needs his approval on, one that he may not give her. She’s holding her breath on that and hoping the conversation with him goes well. But as they approach the deadline for the video and the final games of the season, the ones that will tell if Hatch worked his magic with the team and he still has it, they sit down for a podcast with a well-known sports junkie to discuss the project, and each other.

Hatch: Is this thing on? (tap tap) Ahem. Okay so I’m the head coach of the Lakeview University Jaguars, it’s my first season, and this job was a literal life saver for me, as I was coming off a total mess (of my own creation) after losing my pro coaching job, my marriage, and my self-esteem. I won’t tell you why because Liz is poking me in the side and giving me the throat slashing sign to shut up. We don’t want to give too much away but suffice it to say, thanks to this lovely lady here, my first year as head coach is….interesting, fun, and a lot hotter than I’d imagined that it would be.

Olivia:  I have to thank Coach also, because this video is my ticket back to life, both personal and professional. I want to tell every woman out there not to be swept off her feet by a really good looking, sexy, powerful man. No sweeping. Peel back the top layer and make sure underneath it there doesn’t lurk a despicable creature who will ruin you if you challenge him at all. Huge thanks to Coach (and to my TV station manager) for giving me the go ahead on this video which I hope I going to resurrect my career…and my life.

Hatch: Hold on a second….I’m a good looking, sexy, powerful man and I like to think that I….oh wait. I see what you did there. Okay. I get it. Don’t give too much away.

So here’s the deal, I’ve got to turn this program around. It was gangbusters the years I played but it’s gone to seed since. Making it viable again is crucial not just to the university’s athletic department but also to the community—which the same one where I grew up, more or less in the shadow of this stadium. The goal for everyone is success but I’ve inherited a team of players I barely know and didn’t recruit—which is when you really get to know a kid and his family, what motivates them all for him to play. That’s not easy, but I’m going to make the absolute best of it. Go Jags!

Olivia: When I attend practice I see Hatch doing exactly what he says. (And I do my best not to be distracted by the good-looking, sexy, powerful man!). Making this video come alive is so important to me. I don’t want to to be just another sports profile, but the story of a man who comes back to where it all started and brings success to a faltering program. I graduated from Lakeview University so this story and the finished product are special to me in so many ways. And I want people to see, in the finished product, someone who is so proud of her alma mater and of the man who is bringing it new glory. Our hope is that it will go national.

Hatch: It’s a lot of pressure on both of us, but I think we’re up for the challenge. I know we’re both motivated by adversity—you can’t be a college or pro athlete without that sort of spark. I’m looking forward to recruiting, even though it means time spent away from Olivia, so I can build a team of my own making. Although I have to say, the team I inherited did us all proud this year. But I’m looking forward to watching Liv get the national attention she deserves as a sports producer even more. She deserves every accolade she’d going to get for it. She even managed to throw a spotlight on something I thought I didn’t want highlighted—although it turns out she was right about that, too.

Interviewer: I want to thank both of you for doing this today. I now how busy both of you are and I really appreciated. I know the fans will be hanging on every word. Olivia, good luck with the video and Hatch, good luck with your desired finale to what’s so far a winning season.  Hope to have you both back again.

Want to find out the answers to the threads left hanging? One-click to get your copy of Numbers Game. Happy Reading.

Liz Crowe is a Kentucky native and graduate of the University of Louisville living in Central Illinois. She’s spent her time as a three-continent expat trailing spouse, mom of three, real estate agent, brewery owner and bar manager, and is currently a social media consultant and humane society development director, in addition to being an award-winning author. With stories set in the not-so-common worlds of breweries, on the soccer pitch, inside fictional television stations and successful real estate offices, and even in exotic locales like Istanbul, Turkey, her books are compelling and told with a fresh voice. The Liz Crowe backlist has something for any reader seeking complex storylines with humor and complete casts of characters that will delight, at times frustrate, and always linger in the imagination long after the book is finished.

2 Responses to Numbers Game by Desiree Holt and Liz Crowe