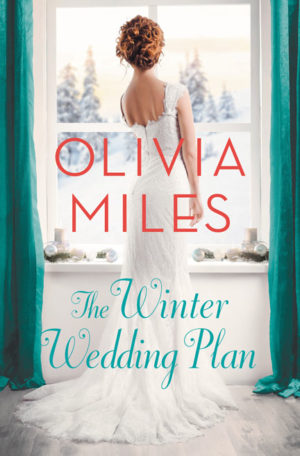 In the vein of New York Times bestselling authors Susan Mallery, Robyn Carr, and Elin Hilderbrand, comes the second in a women’s fiction series about the complicated ties of sisterhood that bind us together and sometimes tear us apart.

All she wants for Christmas is a second chance . . .

Charlotte Daniels has made her share of mistakes, but now that she’s a single mom, she vows to do better–and that starts with a new career. Working at her sister’s event-planning company is just the fresh start she needs.

All she wants for Christmas is a second chance . . .

Charlotte Daniels has made her share of mistakes, but now that she’s a single mom, she vows to do better–and that starts with a new career. Working at her sister’s event-planning company is just the fresh start she needs.

Kate Daniels has finally forgiven Charlotte for her betrayal, but forgetting it is harder. But as the holidays approach and Kate has her own wedding to plan, she has no choice but to turn to Charlotte for help to throw a high-profile client the holiday party of the season.

Charlotte leaps at the chance to redeem herself . . . until this irresistible client asks her to pretend to be his fiancée for the party. She knows their charade won’t come without consequences–not just for her fresh start with Kate, but also for her own daughter.

As Kate’s wedding draws near and Charlotte’s fake romance starts to feel more and more real, will she fall back into the mistakes of her past, or finally prove herself to Kate once and for all?

She pointed out the double set of French doors against the far wall, where a view of a snow-covered stone terrace shone in the moonlight. “Look at that. It’s a winter wonderland out there. It’s the perfect night for a holiday movie.”

He didn’t look convinced. “If you say so.”

“I do.” Charlotte settled back against a pillow. “Besides, this one is really terrific—”

“Wait. You’ve seen it before?”

“At least a dozen times! We watch it every Christmas. It’s sort of a family tradition.”

Charlotte grinned, imagining how wonderful it would be when Audrey was old enough to partake in the event. “Usually we make a big bowl of popcorn, have some hot chocolate. We can recite all the lines, of course, but that’s just part of the fun. Whenever I think of this movie, well, it just feels like coming home.”

Greg glanced at her. “I can make some popcorn if you’d like.”

Charlotte considered the holiday dress she’d hoped to squeeze herself into for the party, and then decided the diet could wait. She grinned. “I’ll pause it. You don’t want to miss the opening scene.”

“Oh, I wouldn’t want to do that,” Greg teased, but she could sense that he was pleased.

Charlotte couldn’t wipe the smile from her face as she snuggled deeper under the chenille blanket and waited for Greg to return with the popcorn. Despite the size of the house, she could soon make out the sound of popping—she glanced sharply at the baby monitor, silently willing Audrey to be unaware of the noise. She was enjoying herself, maybe more than she should, and she wasn’t ready to be on mom duty again just yet. For just a few moments she wanted to just be Charlotte.

And somehow, with Greg, she was. Greg, who didn’t know her past. Greg, who had no hold on her future. Greg, who knew her just as she was. Today. Present moment only. No mistakes. No slip-ups.

She stared at the frozen television screen. A year ago she had watched this movie alone, with tears streaming down her face as she worked her way through a family-sized bag of potato chips, wondering if her sister and parents were watching it together, if they were happy she wasn’t with them.

Little did she know at the time just how different this year would be. Better. Or at least on the up-and-up.

Greg came into the room with a bowl of popcorn, his grin sheepish. “I won’t lie. It’s microwaved.”

“The best kind,” Charlotte remarked. Her eyes widened slightly as he slid onto the couch beside her again. Was it just her imagination, or was he coming a little closer this time?

She looked to her right. There wasn’t much more space left for her to move. “Ready to start the movie?” she asked, gripping the remote.

He passed her the bowl of popcorn, and she helped herself to a few kernels. “This isn’t one of those feel-good movies, is it?”

She raised an eyebrow. “It’s a holiday movie. What do you think?”

He shook his head, but she could tell by his faint smile that he liked her response. “Oh, boy. Let’s get it over with then.”

“I have a feeling you’re going to enjoy it. Trust me.”

He gave her a strange look. “I do trust you.”

She rearranged herself on the couch, unsure of what to make of that remark, and fighting back the strange feeling that she just might be able to trust him, too. If she let herself.

The fell into silence as the movie started, and a few glances at Greg told her that he was fully engrossed within minutes. She smiled in satisfaction, and decided to enjoy herself and put her troubles from her mind for a bit. But the next thing she knew the television screen was quiet. There was popcorn sprinkled all over the leather couch, and  the baby monitor crackled somewhere behind her.

She tried to remember the last scene in the movie she’d watched, and realized with a sinking feeling that she’d fallen asleep well over an hour ago. Her eyes sprung open. She wasn’t in her bedroom, and the pillow under her cheek wasn’t a pillow at all. It was a chest. A very hard, very sturdy, very manly chest. She blinked in panic as her heart began to race. Staying as still as she could under the tense circumstances, she listened to the steady drum of Greg’s pulse though his sweater, felt the rhythm of his breath as his chest moved softly up and down, moving her with it, almost lulling her into a state of tranquility.

He was asleep. And so help her, she intended for him to remain that way.

Inch by inch, she eased herself off the couch, grabbed the baby monitor by the handle, and made her way to the half-open French doors.

She winced, and closed her eyes before turning to face the owner of the smooth, groggy voice that was much too deep and husky for her own good. “I think we fell asleep.”

She didn’t bother mentioning just what position they’d ended up in, or how that might have happened. She felt the blood drain from her cheeks when she considered that while she had dozed off somewhere around the scene where the young boy goes to the mall with his wish list, meaning somewhere in the first third of the movie, it was entirely possible that Greg hadn’t nodded off until a few minutes ago.

“Too bad. That was a pretty good movie.”

She nudged him with her elbow. “Told you so.”

He arched an eyebrow. “Rain check then?”

That sounded an awful lot like an invitation she should probably resist, but with that friendly grin and those warm eyes, really, what was a girl to do? “Can’t wait.”

And she realized as she turned from the room and hurried back upstairs that she couldn’t wait. And that was really quite a problem. ONE WEEK TO THE WEDDING, #1 Olivia Miles writes women’s fiction and contemporary romance. A city girl with a fondness for small town charm, Olivia enjoys highlighting both ways of life in her stories. She lives just outside Chicago with her husband, young daughter, and two ridiculously pampered pups.