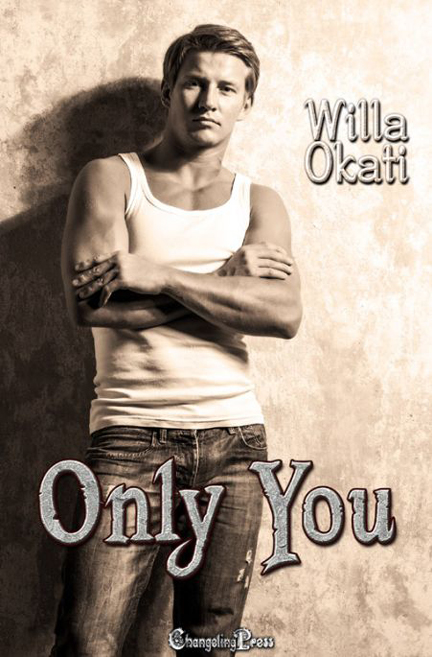 Now that Alex has Zachary back in his sights, he’s never letting go again.

Once upon a time, a eighteen year old Alpha named Alex fell in love with a pretty Omega boy from the wrong side of the tracks. Zachary was everything he’d ever wanted — sweet, sassy, and sexy as hell. Alex would have married that boy and raised baby after baby with him — if Zachary hadn’t run away when Alex popped the question.

Alex doesn’t give up easily. When a train derails on its way to Alex’s hometown, he’s finally got another shot at the one who got away, and he’s not going to waste it. Now he’s got Zachary in his sights, and he’s never letting go again.

Second Chance Omegas 1: Only You by Willa Okati

Now that Alex has Zachary back in his sights, he’s never letting go again.

Once upon a time, a eighteen year old Alpha named Alex fell in love with a pretty Omega boy from the wrong side of the tracks. Zachary was everything he’d ever wanted — sweet, sassy, and sexy as hell. Alex would have married that boy and raised baby after baby with him — if Zachary hadn’t run away when Alex popped the question.

Alex doesn’t give up easily. When a train derails on its way to Alex’s hometown, he’s finally got another shot at the one who got away, and he’s not going to waste it. Now he’s got Zachary in his sights, and he’s never letting go again.

It killed Zachary to let Alex go the first time. He loved that man as much as Alex loved him, and he’s never fallen out of love, but he left to give Alex his best chance at living his best life. Zachary can’t — won’t — be sorry for that, no matter what it cost him.

Stranded in Second Chance with nowhere else to go and no way to get there, Zachary’s got no choice but to accept the help and shelter Alex offers. The chemistry’s still there. The desire. The connection. The yearning. But when the secrets they’ve both been keeping come to light, will they shatter their bond for keeps, or bring them together in a forever kind of love?

“As much of it as you can fit in a cup. No cream but double the sugar. Please.”

The train attendant shook his head, but with a smile and a finger briefly pressed to his lips as he passed over not one but two Styrofoam cups filled to the brim. He was an Omega too, in his mid-thirties by the look of him, and he wore a black jet widower’s ring instead of a wedding band. Things weren’t much easier for the widowed than the unmated or separated. He understood.

Zach took a grateful gulp, not caring that the coffee was hot enough to scald his throat, and asked, “How far behind schedule are we?” Stretching his legs at the next station would do him good; they ached when he stayed still for too long.

“About half an hour, at this point.”

Wishing wouldn’t make the wheels turn faster, but with nothing to look at outside in the dark, Zach adjusted his position so he could get a better view of the passengers in his car. Like most Omegas, he wasn’t very tall. Some new folks had gotten on and others disembarked while he’d dozed, and he liked wondering what their stories were. Two young Alphas who acted like frat bros; interesting, they weren’t the usual size for Alphas, but small and compact and they weren’t at each other’s throats but laughed and joked like best friends. A couple that had to be recently married from the way they could barely resist climbing all over each other; an Omega with a contented smile, probably on his way back home, and —

Zach’s heart jumped into his throat and wedged stuck there even around the burn of his beverage. Three rows ahead, dark wheat-blond hair and a profile almost as familiar as his own turned to smile at the attendant as he refused their offer of coffee. It couldn’t be, it couldn’t be, he hadn’t seen that profile since he was eighteen, but —
He’d changed — well, he’d grown up, the way everyone did, the bones of his face maturing from soft boyish cuteness to strong, masculine definition. A short beard, trimmed and shaped, that suited his strong, stubborn jaw. The kind of casual suit that would have cost the equivalent of a month’s rent in Manhattan. Elegant hands with sturdy knuckles and deft fingers, and a smile that lit up the train.

Zach would have known him anywhere, even if he’d shaved his head and started scowling instead of smiling. If he closed his eyes, he could feel those hands on the bare skin of memory. After all, you never forgot your first.

He should stop staring. Alex would sense it any second now, and he might look around, and —

His gaze drifted back up, drawn like a moth to a flame.

Zach’s body twitched with the first pangs of arousal, wanting what he’d had once upon a time. He remembered it all, and he remembered it perfectly. He dreamed about it, when he slept. The taste of Alex’s skin, the softness and hardness of his mouth and how his eagerness had nearly rubbed the insides of Zach’s thighs raw. The fullness, almost too much and too tight, when he slid inside Zach.

Anger slowly took alarm and unhappiness’s place – anger, and frustration with himself. Zach should have sensed this train was to be avoided. Dodged. Something! And Alex, sitting there as if he didn’t have a care in the world – it was everything Zach had wanted for him, the entire reason he’d left Alex in the first place, but seeing it in the flesh opened all those old wounds back up and made them bleed afresh. The pain from that moment of saying no to what Alex had offered with all his big, warm heart cut sharper than any knife – but he’d had to. You didn’t do that to your first boyfriend, did you? Take him up on a marriage proposal and tie him down to a shitty life based on a few promises made in the afterglow?

He’d done the right thing by saying no, leaving, and giving Alex his freedom. Zach knew that. Was sure of it. Even if none of that had ever made him feel any better about it.

They must have been traveling farther and faster than Zach had realized, or he was more out of it than he’d known. Between one blink and the next the train’s PA system crackled to far-too-loud life again, announcing they’d reach their next station at Second Chance in ten minutes. Second Chance? What kind of name was that for a town?

Alex looked up at the speaker, nodded in an absent sort of way, and stood to open the overhead compartment. He took out a bulging messenger bag and slung it over his shoulder and stuffed a pair of thick gloves and a warm knit hat in the pockets of his coat. This would be his stop.

Zach caught his lip between his teeth, torn between – it was pure foolishness, the idea of going to him — and sanity, staying right where he was.

Zach would have, really he would. But as Alex walked past him – always so eager to do things, that one; he would start heading for the exits before the train had even come to a halt — he only made it two steps past Zach’s seat before he stopped. As Zach’s heart sank down past the pit of his stomach he saw Alex pause, then turn to look back.

He stopped, just like Zach had, blank with surprise. “Do I know you?”

Zach held his breath. Could he lie? Yes, but this new, matured Alex would have the life experience not to believe him, and he hadn’t changed nearly as much as Alex had. He opened his mouth, but nothing came out.

“I do know you. I know your face,” Alex said. His voice had matured with the rest of him as he aged, going from sweet to firm with a raspy vocal fry on the edges. “Zach?”

Willa Okati (AKA Will) is made of many things: imagination, coffee, stray cat hairs, daydreams, more coffee, kitchen experimentation, a passion for winter weather, a little more coffee, a whole lot of flowering plants and a lifelong love of storytelling. Will’s definitely one of the quiet ones you have to watch out for, though he — not she anymore — is a lot less quiet these days.