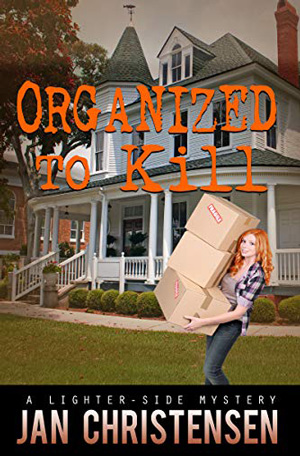 In Jan Christensen’s ORGANIZED TO KILL, it’s bad enough to find a dead body. Even worse when it’s in your lover’s bed. In Organized to Kill, the fourth in the Tina Tales series, Tina and Hank become suspects in a bizarre murder. But when another victim turns up burned beyond recognition the next night, the suspect pool widens. Are the two murders even connected? It’s bad enough to find a dead body. Even worse when it’s in your lover’s bed. In Organized to Kill, the fourth in the Tina Tales series, Tina and Hank become suspects in a bizarre murder. But when another victim turns up burned beyond recognition the next night, the suspect pool widens. Are the two murders even connected?

Hank’s background in federal and police procedure drives the investigation, and Tina’s organizational skills and psychological training help unearth clues. Fortunately, her poking around is sometimes accompanied by her Uncle Bob’s quirky commentary and Hank’s hot bod. Tina is determined to find the reasons for both murders by talking to suspects, figuring out if the two crimes are connected, and if they are, how. Just when she thinks she has the answers, she finds another clue. But it might be too late and put her own, and Hank’s, life in danger.

“What a great party,” Tina said as she brought some glasses from the living room into the kitchen. Hank stood at the sink rinsing items and placing them into his dishwasher. She stood a moment, admiring his butt, thankful they’d become a couple after knowing each other since toddlerhood. He’d grown into an amazing man, now twenty-nine, both in looks—her friends called him Hank the Hunk—and in character.

He turned around and said, “It is fun to see old friends, isn’t it? And to find out who they’ve hooked up with lately.”

Tina laughed and set the glasses on the counter. “Samantha picked a real winner, didn’t she?”

Hank smiled at her. “At least he wasn’t a mean drunk. Just a clumsy one.”

“Trying to be the life of the party. That’s too bad about the conch shell. It was a beauty. Where’d you get it?”

Hank turned back to the sink. “I don’t remember.”

She walked over to him and craned her neck to put her face close to his. “Yes, you do. You were with an old girlfriend and afraid to tell me about it. Who was she? Spill it.” She grinned. They’d had this kind of discussion before with questions flowing both ways. Teasing, but also, she was curious. Who wouldn’t be?

Hank carefully rinsed another glass and put it in the dishwasher. “Samantha. Quite a coincidence Seth broke the shell I found on the beach in Belize when we were together.”

Tina shook her head. “I want a list. It took courage to invite an old girlfriend to your party.” She squinted at him, trying not to laugh out loud. “How many other old girlfriends were here?”

“This will take some time, I assume.”

“Yes. We’d better sit down.” Hank wiped his hands on a towel, and they settled into the chairs at the square, tile-covered kitchen table.

Tina flipped a lock of her red hair out of her eye. “Samantha’s not that old.”

“So, I’ve been told you liked to date older women.”

“Who told you that?”

“Hmm. Looks as if she’s a better friend to you than to me.”

“You’re upset she told me that?”

“Okay, back to the subject. Name some names.”

“When I was younger, I liked to date older women. As I matured, I dated ones more my own age.”

“I see. Learned all you could from the older ones.”

Tina rolled her eyes. “Okay, you dodged the question twice now. We’ve got Samantha. Who else?”

Hank grinned. “I don’t think I should kiss and tell. You want to list all your old boyfriends? I know about Brandon, and some guy in Virginia you broke up with. Who else?”

“Don’t change the subject. I’m betting there were so many you can’t remember them all.”

“None of the women I dated were forgettable.”

She stared at him a moment, then laughed. “I bet they’ve never forgotten you, either.”

“I hope they remember me fondly. While we’re on the subject of old flames. What are your feelings about Brandon now?”

Tina blinked. “I never expected you to ask about him.” So much had happened in the last year, her head spun thinking about it. She’d moved back home to Newport after being in Virginia for eleven years, first at college, then after getting her PhD, working as a psychologist. After one of her patients committed suicide, she couldn’t break out of the feeling of guilt. Everything became too hard. The relationship with her lover deteriorated into bitter tears and shouting matches. She had to quit working, and she came home.

Brandon had matured into a solid criminal lawyer, and they began to date. His sister, Leslie, was her best friend, and Brandon and Hank, she and Leslie had grown up together.

Slowly, her relationship with Brandon became uncomfortable, and her desire for Hank stronger and stronger. She could tell the feeling was mutual, but except for one lapse, he wouldn’t make a move. A couple of months ago she broke up with Brandon, and she and Hank began dating.

Hank took her hand. “Of course, I’m curious since we’ve all known each other since we were wee babes. You seemed to be a good match.”

“For a while. You know Brandon. He’s a bit controlling. Very sure of himself.”

“I’m sure of myself. That doesn’t seem to put you off.”

She shook her head. “True. But you aren’t always telling me what to do. Actually, demanding I do something or other.”

“Yeah. Sometimes in a rather disparaging way.”

“Ouch.” Hank let go of her hand and stood up. “I’ll remember not to do that.”

“That’s the point. You never have.”

Tina gave up asking–how many times would it be now?–Hank to name his old girlfriends. It really didn’t matter to her that much, and she knew he knew that. They finished cleaning up the living room and kitchen in companionable silence. Hank turned off the lights in both rooms, and they headed to the master suite. When they arrived, Tina shook Hank’s arm. “Someone’s passed out on your bed. Who is it? I can’t see his face.”

Hank walked toward the bed. “Seth.”

Tina saw Hank flinch. He touched Seth’s neck, then pulled his cell phone out of his pocket. “He’s dead, Tina. Go wait in the living room.”

Stunned, Tina did as she was told. As she went, she realized the irony about their earlier discussion. In this case, she was happy to follow a man’s command. Jan Christensen grew up in New Jersey. She bounced around the world as an Army wife, and in Texas after her husband retired. After traveling for eleven years in a motorhome, she settled down in the Texas Coastal Bend. Published novels are: Sara’s Search, Revelations, Organized to Death, Perfect Victim, Blackout, Buried Under Clutter, A Broken Life, Cluttered Attic Secrets and Organized to Kill. She’s had over seventy short stories appear in various places over the last twenty years. She also writes a series of short stories about Artie, a NY burglar who gets into some strange situations while on the job. Learn more at her website: www.janchristensen.com