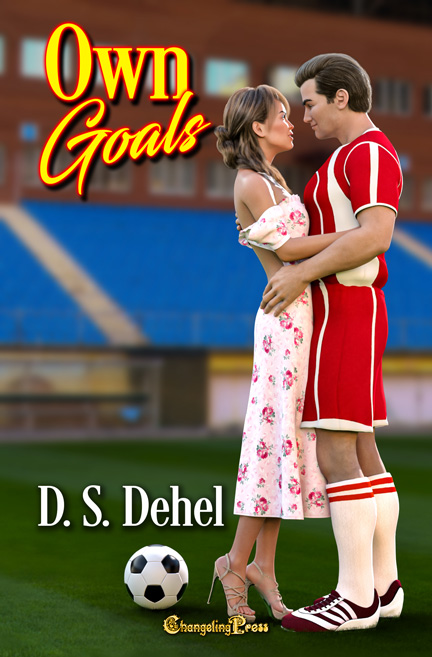 Sometimes You Just Know by D.S. Dehel, author of OWN GOALS.

Often, very often, writers have no idea where their ideas come from. Generally, this is me. Oh, I can point to a moment when an image or character popped into my head, but usually that’s all. Penalty Kicks  and Own goals are different. Honestly, it’s one of the few times I’ve gotten revenge in writing. [Insert demonic laughter.]

I am a “sports widow,” more specifically, a “soccer widow.”  I know I’m not alone in this, but it doesn’t really help. For those who aren’t familiar with the term (You lucky creatures), it’s when your SO becomes obsessed with a sport (or hunting or refurbishing cars or…you get it.) you are left alone, ignored, and faced with all the responsibility for home, children, and pets.

Often, very often, writers have no idea where their ideas come from. Generally, this is me. Oh, I can point to a moment when an image or character popped into my head, but usually that’s all. Penalty Kicks  and Own goals are different. Honestly, it’s one of the few times I’ve gotten revenge in writing. [Insert demonic laughter.]

I am a “sports widow,” more specifically, a “soccer widow.”  I know I’m not alone in this, but it doesn’t really help. For those who aren’t familiar with the term (You lucky creatures), it’s when your SO becomes obsessed with a sport (or hunting or refurbishing cars or…you get it.) you are left alone, ignored, and faced with all the responsibility for home, children, and pets.

My husband not only watches soccer, he plays it, too–and for those who don’t know: it’s a year round sport. Some weeks he plays four nights a week, then he’d watch the English Premier League AND Major League Soccer on the weekends. We joked that I better not go into labor during the World Cup. At least I joked about it. He might have been serious.

Soccer is the soundtrack of my life. In an effort to relate, I learned about the sport (Though to be honest, that offside thing still confuses me.) I even have my favorite teams– Derby and I can identify many players besides David Beckham.

Did you know that many players are quite good looking when they’re not all kitted up and sweaty? Seriously. Check them out.

Eventually, it all seeped into my consciousness, and when I saw a call for a May-December story, I thought, “Why not?” And the tale that became Game of Two Halves: Penalty Kicks and the sequel Own Goals was born.

So while the Spirit may not exist, it’s based on things I have seen and participated in, and I had a great time coming up with the Spectors supporters and their rituals. And adding the steamy parts. You gotta have steamy parts when hot guys in shorts are involved.

Love is a beautiful game.

India Roberts can’t wait until her divorce is final, then she’ll be Ms. Jackson. At 40, she’s waited long enough to pursue her goal of becoming a fashion designer, and a chance encounter may just be the beginning of a new career.

What she doesn’t need is a new romance.

When soccer player Matt Bettony rescues her from a bad date and makes her rough night oh-so-much better, she discovers that she is ready for something, even if it isn’t too serious. Thirteen years her junior, he’s the perfect fit for a no-strings love affair that won’t interfere with her dream…until Matt gets other ideas.

Both India and Matt have goals they’re chasing and are seeing some success, but soccer is a game played in two halves, and their time is just beginning. They have to withstand the scorn of others and pressure that comes with fame to win the game called love.

“Oh, okay. Thank you. So, um, Matt, how old are you?” She fiddled with the ties to the shorts.

He came around the end of the bed. “I’m twenty-six. I’ll be twenty-seven in September. Why?”

“Why?” Again, she sounded on the brink of hysteria. “Because I just turned forty in January, and I kissed you, and if you give me the chance, I’ll kiss you again, when I shouldn’t be kissing you at all.” I need to get out of here. What have I done? She brushed past him on her way to who knew where.

“Whoa. Wait.” He caught her arm. “Why can’t you kiss me? You’re divorced, right? Because I don’t condone cheating.”

“Yes, I’m divorced, but did you miss the part where I said I was forty?

“I’m…” She tried to do mental math, but her brain wouldn’t cooperate. “I could be your mother.”

“Really?” He sounded amused. “You’d have been thirteen.”

“Well, I could have been your mother. Regardless, I’m old enough to be an aunt or big sister.”

He sighed, looked away, then looked back. “I’ll be totally honest, you are older than I thought because you don’t look a day over thirty-five, but really, what difference does it make? I want you.”

“You want me?” She couldn’t keep the disbelief out of her voice. No one had ever been so blunt with her in her entire life.

“I do.” A small smile turned his lips upward. “I thought about accidentally-on purpose forgetting to turn the dryer on so you’d have to stay longer, and that would give enough time to figure out some way to talk you into my bed.”

Life begins in the second half.

Blurb: India Jackson’s star is on the rise. It’s taken forty years and a drawn-out divorce, but she’s finally proud of who she is and how life is treating her. Now, she’s setting her sights on the future. There is big snag, though — how people react when they find out her boyfriend Matt is only twenty-seven. Most everyone thinks she’s gold-digging by dating one of the year’s hottest soccer talents, and she wonders how long it’ll be before he’s had enough of the gossip and call it quits.

Planting more seeds of doubt in her mind is wunderkind designer Rémy Stirling who wants to launch more than India’s shoe line, but she’s focused on proving to the world—and her ex-husband—that she can be a major force in fashion.

The second half of any game is fraught with tension and errors are likely. In soccer—and in life — an Own Goal happens when you screw up and score for the other team. When Matt racks up a personal one, India wonders if her future is with a different man…or if she’s making an unforced error of her own.

Excerpt from Own Goals:

She recognized the accent immediately. “Hey, Salé.” Why is he calling me? Why couldn’t he text? Her heart told her something was wrong.

“I got your text.” His voice was weirdly neutral, too neutral.

“And?” She wanted to scream at him to just tell her already, but that wouldn’t help.

India could hear no good-natured jibes between the two of them, and it was clear Matt wasn’t sitting with Salé. Sure, there was plenty of room on the bus, but the friends usually sat together. Her heart dropped.

“I’m back. So, I can’t tell you what happened. He came to the stadium in a terrible mood. I thought maybe the two of you had a fight or something.”

“No, he sounded fine when we talked last night. I have no idea what’s going on.” Her nausea was back. Instinct told her something serious was wrong. “I’ve never seen him play like that.”

“Me, either.” Salé sounded sad. “No, I’m wrong. He did this when—” His voice was obliterated by the beep of an incoming call.

She looked at her screen. “Salé, it’s Matt. I better take this. I’ll call you if I find out what’s up.” She didn’t wait to hear his response. With a touch she switched to Matt. “Hey, handsome, how are you?”

“I take it you didn’t see the game.” It was hard to describe his tone, angry, sad, ferocious.

Something about his attitude struck her the wrong way. “I did watch the game in between checking on how Maida’s gown was received.”

He’s not even going to ask how Maida’s gown went over? India was torn between being angry and even more worried. “So I saw.”

“We’ll be back in three hours.” Anger still lanced through his words.

“Okay.” She was afraid to say more.

“I’m really tired.” And he did sound it.

“Are you saying you don’t want to see me tonight?” She tried to keep her voice neutral.

“No, I’m not saying that. Honestly, I don’t know what I am saying.” Now she heard frustration mixed with forlorn, and she felt a twinge of sympathy.

Why not? What’s so wrong?

S. Dehel is a lover of literature, good food, and the Oxford comma. When she is not immersed in a book, she is mom to her kids and spoiling her rather pampered feline, Mr. Darcy or her equally pampered puppy, Jameson, and her slightly psychotic Australian Shepherd, Piper. Having finally retire, she spends her days dreaming up new plotlines. She adores literary allusions, writing sex scenes, and British men. Actually, make that hot men in general. Her devoted husband is still convinced she writes children’s books. Please don’t enlighten him.