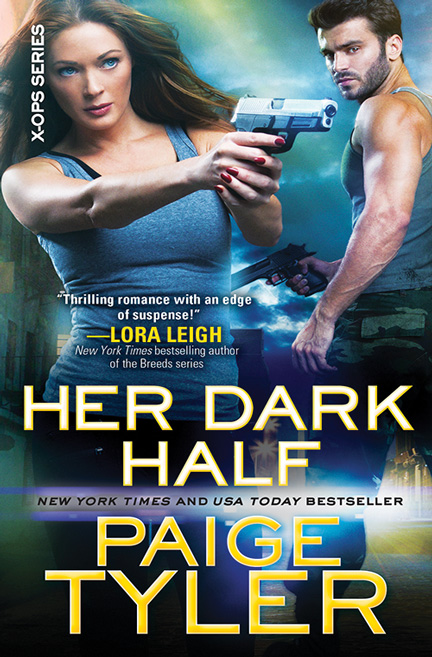 HER DARK HALF by Paige Tyler releases Sept 5th!

Coyote shifter Trevor Maxwell is teamed up with CIA agent Alina Bosch to catch a killer. But when the mission becomes much more dangerous than they expected, they’re going to have to ignore the attraction between them and learn how to trust one another to come out on the other side… Title: Her Dark Half

Coyote shifter Trevor Maxwell is teamed up with CIA agent Alina Bosch to catch a killer. But when the mission becomes much more dangerous than they expected, they’re going to have to ignore the attraction between them and learn how to trust one another to come out on the other side…

Her Dark Half Excerpt

“What’s the plan here?” she asked Trevor quietly as the restaurant’s patrons eyed them curiously. “Because I don’t see anyone warming up to us enough to invite us into the back room.”

“We’re Trevor and Alina Hoffman, a filthy rich, newly married couple from Silicon Valley,” Trevor said, glancing around as if taking in the ambience. “We’ve been on an extended honeymoon for the past few months and are currently heading for a trans-Atlantic cruise out of New York City. We decided to do some gambling and got tired of dealing with all the crap at the local casino.”

“You think they’ll buy that?” she asked as he led her across the room toward the door with the guards.

“You sell the fact that we’re a newly married couple, and I’ll make them believe I’m a rich guy with a gambling addiction.”

She could do that. Then she realized one big flaw in their cover story. “If we’re a newly married couple, shouldn’t I be wearing a ring?”

Trevor gave her a sidelong glance. “What makes you think you aren’t?”

She looked down at her hand in confusion and almost fell off her stacked heels as she saw the monstrously large diamond he’d somehow slipped onto her ring finger when she wasn’t looking. Oh crud, it was huge! And as beautiful as any she’d ever seen.

“When did you put this on? More importantly, is this thing real?” she whispered.

Thank goodness she had his arm to keep her steady. She was feeling faint at the idea of wearing a diamond that was probably worth more than her entire apartment.

“I put it on you when we were married on the first of June in Monaco,” he whispered back. “And of course it’s real. I would never put something fake on the love of my life.”

He made a face. “Okay. I slipped it on your finger when I was helping you out of the SUV. And yes, it’s real, so don’t lose it. I had to sign my life away to get it out of the DCO safes.”

She gulped. “How much is it worth?”

“Nothing compared to you, sweetheart,” he said in a romantic tone as they stopped in front of the two guards.

The bouncers working this door were a little bit more professional than the ones outside.

“Can I help you?” one of the men asked in a deep, rough voice that made Alina wonder if he chewed gravel for fun.

“Someone told me a man might be able to find a friendly game of poker somewhere near here,” Trevor said casually. “I don’t suppose you two might be able to point my wife and me in the right direction for a game like that?”

The two men regarded him suspiciously.

“I think you’re talking about the Horseshoe Casino,” Gravel said. “It’s nearby, very clean and friendly.” Trevor chuckled. “The Horseshoe is very friendly. But the place doesn’t have the quite the atmosphere we’re looking for. It’s a little too…what’s the word?… sanitized for our liking.”

Gravel studied Trevor for a moment, then glanced at the bar, giving someone there a nod. Ten seconds later, a slim man in an expensive suit appeared at their side.

“My name is Teddy,” he said in a cautious yet friendly tone. “What can I do for you?”

“I’m Trevor Hoffman. This is my wife, Alina. We’re getting ready to head out on a cruise in a few days and decided to do some gambling while we’re in town. Someone told us this place runs a clean game, so I thought I’d spend some money here.”

Teddy surveyed them with a practiced eye, taking in the cut of Trevor’s suit and her expensive gown, not to mention the big honking ring she wore. He must have liked what he saw, because he nodded.

“If I could get some identification and a credit card from you, Mr. Hoffman, I can quickly check your credentials and set you up with a line of credit.”

Alina tensed as Trevor handed over the requested ID and credit card. They could be in trouble. The fake ID and credit card by themselves would have taken quite a bit of time and money to pull off. Coming up with an Internet background to support that would take even longer.

“What are they going to find when they run your name and that credit card number?” she whispered as he slipped his arm around her and casually urged her away from the two men guarding the door.

“Relax.” He flashed her a grin. “They’ll find us with all the relevant financial and societal tidbits one would expect to see when looking at the rich and bored.”

She glanced at Teddy. He typed something into a computer just out of sight behind the bar. A moment later, he lifted his head and frowned in their direction.

Even the two guards were eyeing them funny now. She was starting to wish she had a weapon. If things went bad, they were in trouble.

“Alina,” Trevor said softly as he tightened his arm around her waist and tugged her closer. “Now’s the time for you to sell the newlywed thing.”

She opened her mouth to ask him exactly how he suggested she do that when he pulled her even closer.

She wished she could have said it was years of CIA training that took over and made her kiss him. But that wouldn’t have been true. Instead, it was a totally different kind of instinct. The kind that made a woman want to kiss a hot guy.

Explore the world of X-Ops! Enter to win a copy of Her True Match by Paige Tyler