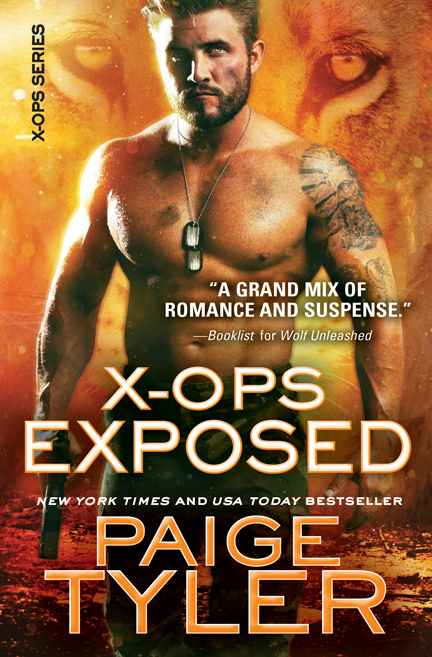 In Paige Tyler’s X-OPS EXPOSED, heartbroken and determined, Dr. Zarina Sokolov tracks Tanner into the wild. Her presence unleashes Tanner’s protective instinct—big time. Locals have been disappearing and he is desperate for Zarina to leave. As the kidnappings escalate, Tanner must embrace the dangerous instincts he fears so much. But with Zarina at his side, he’ll have to learn to control his animal impulses, or lose himself—and the woman he loves—to the beast within. HE LEFT TO KEEP HER SAFE

Believing he’s too dangerous to be among people, feline hybrid Tanner Howland retreats deep into the forests of Washington State—with no choice but to leave behind the woman who’s captured his heart. What he doesn’t know is that she followed him…

SHE WOULDN’T STAY BEHIND

Heartbroken and determined, Dr. Zarina Sokolov tracks Tanner into the wild. Her presence unleashes Tanner’s protective instinct—big time. Locals have been disappearing and he is desperate for Zarina to leave. As the kidnappings escalate, Tanner must embrace the dangerous instincts he fears so much. But with Zarina at his side, he’ll have to learn to control his animal impulses, or lose himself—and the woman he loves—to the beast within.

Knowing she wasn’t going to get away, Zarina slid to a stop and spun around, ready to shout at the beast that wanted to kill her. She’d seen Tanner let out a roar that could paralyze almost anything crazy enough to attack him, so perhaps she could do the same thing.

But her cry of defiance died in her throat as she came face-to-face with a gigantic grizzly bear. The beast reared up on its hind legs, towering over her for one heart-stopping moment before dropping to all fours and roaring at her so loud, her bones felt turned to jelly.

She vaguely remembered the store clerk in town trying to sell her a can of bear repellent. If she wasn’t so terrified, she’d laugh at the idea. What the heck would a can of pepper spray do to something this big?

The bear took a step in her direction with another roar, showing off fangs large enough to bite right through her.

For a split second, Zarina considered running again, but it would be pointless. She’d never outrun a bear.

So instead, she screamed as long and loud as she could.

The grizzly looked shocked for a moment, but instead of scaring the animal off like she’d hoped, all it did was seem to make him mad. Head low, the bear started toward her.

She was going to die.

But suddenly, the bear stopped, a look of what could only be confusion on its face as it focused on something behind her. A second later, a roar ripped through the night that shook the ground. She jerked her head around, almost collapsing in relief when she saw Tanner standing there in the dark, dressed in jeans and a T-shirt, his eyes glowing vivid red, fangs bared as he let out a roar that sounded exactly like that of a lion. Which made sense, because those were the DNA strands blended with his own.

The rage and anger on his face must have been enough to scare the grizzly, because the huge animal gave one more halfhearted chuff in Tanner’s direction, then turned and scurried back into the pitch-dark forest.

To her right, she caught movement. Crap, Tanner was going after the bear. Not because he wanted to hurt the animal, but because by running, the grizzly had become the prey, and Tanner’s lion half simply couldn’t stop itself from hunting the animal down now that the rage had taken over.

He stopped like he’d hit a brick wall, then stood there, unmoving, for what felt like forever, facing away from her and staring off into the darkness in the direction the bear had run. Not that it was probably all that dark for Tanner. With his animal-enhanced eyesight, he could probably see the grizzly’s big, fuzzy rump bouncing off into the woods. And if his eyes lost the creature, then his keen sense of smell would fill in the details. Which was a good thing, since she’d have probably been a bear treat if it hadn’t been for that nose of his.

After what seemed like an eternity, Tanner turned and looked at her. His fangs and glowing red eyes were gone now, replaced by a mesmerizing blue gaze and a ruggedly handsome face that had made her heart almost stop beating the first time she’d seen it. He had a bit more dark-blond scruff along his jaw and chin now. Actually, a lot more. Maybe it was because she’d grown up in a cold-weather environment where the opposite sex went all caveman in an attempt to stay warm, but she wasn’t usually a fan of facial hair. On Tanner, though, it looked incredibly scrumptious.

His T-shirt clung tightly to his chest and shoulders, showing off all the muscles he had upstairs, while his jeans fought to contain thighs that looked poised to tear their way out at any moment. Had he actually gotten more muscular since he’d been out there?

Zarina almost ran to him right then so she could throw her arms around him and hold him tight for the rest of the night. But she didn’t, because she knew he wouldn’t be ready for that. Not after she’d showed up in the forest out of the blue and almost gotten eaten by a bear.

But damn, it was hard.

Tanner looked better now than when he’d been living in the dorms at the DCO complex. He had been put up there since the agency’s covert agents had found him out here all that time ago. Even the stress lines that had been etched into his features had completely faded. It almost made her sorry she’d come out here to disturb the serenity he seemed to have found. But she couldn’t stay away, not with the way she felt about him. And especially not when she could finally help him.

“What are you doing here, Zarina?” he asked bluntly.

So much for him sweeping her into his arms and saying he was happy to see her. Clearly, he wasn’t. She tried not to let that hurt too much.

“I’m here to help you,” she said, equally blunt.

She’d learned a long time ago that dancing around a subject wasn’t the way Tanner did things. It wasn’t the way she did, either, so that was okay. She didn’t bother mentioning that his disappearance had caused her more sleepless nights than she could count and had nearly driven her insane with worry. That would have been emotional blackmail, and she wasn’t going to do that to him.

His jaw flexed. “I don’t need any help. I’m doing a good job of controlling my hybrid impulses all on my own.”

She looked pointedly in the direction the grizzly had run. “It doesn’t seem like it to me.”

Tanner flinched, and she immediately regretted her choice of words. Dammit, she was out here to help him, not push him further away.

“I haven’t lost control in the two months I’ve been out here,” he said through clenched teeth. “Not until you decided to do something stupid like wander through the middle of a grizzly’s territory by yourself.”

Zarina wanted to point out that she hadn’t planned to be out here this late and that there was no way she could have known she was in a bear’s territory. But she bit her tongue and focused on trying to defuse the situation.

“I’m sorry I made you lose control again,” she said. “But I’m here to make sure it doesn’t happen again…ever.”

She waited, expecting Tanner to ask her what she meant by that, but he didn’t. Instead, he stood there regarding her and looking way better than any man should considering he’d been camping in the woods for two months. She had met plenty of guys who couldn’t pull off his level of masculine perfection after primping in front of a mirror for an hour. That was one of the other things she’d learned about Tanner. He didn’t have to work hard at being so amazing. It came naturally to him.

After another minute of silence, Zarina accepted that if they were going to talk, she was the one who would have to get the conversation started. “I finished the hybrid drug antiserum that will return your DNA back to what it was before Stutmeir’s doctors experimented on you. You can be a normal human again.”

She waited for some reaction—relief, doubt, elation. Something. But Tanner looked as interested as if she’d told him it might rain tomorrow.

“Yes, you will.” She stepped closer, anguish coursing through her when he immediately took a step back. “I worked on the antidote every minute since you left. It will work. It will keep the beast from ever slipping out again.”

“I don’t want it, dammit!” he shouted, making her jump. He cursed and ran his hand through his hair. “I’m sorry,” he said, his voice softer. “For yelling at you. And for making you come all the way out here and hiking halfway across the Wenatchee Forest to find me. But I don’t want the antidote. Just go home, okay? Leave me out here where I can’t hurt anyone.”

Zarina’s heart tore in two at the pain in his eyes. She had no idea why he was turning down her offer, but she wasn’t leaving without him.

“I’m not going home,” she said, standing her ground and leveling her gaze at him.

Having this conversation would have been a lot easier without holding a flashlight. Then she could have folded her arms to emphasize her point.

“Then you’d better have a lot of books on that e-reader of yours, because you’re going to get bored damn fast waiting for me at whatever hotel you’re staying in.”

Red flared in his eyes but faded just as quickly. “Like hell you are.”

“I’m not leaving,” she said firmly. “You can run off into the woods—we both know I can’t keep up with you—but I still won’t leave. I’ll keep walking all over the forest looking for you.”

His eyes flickered red again, and he muttered something under his breath she couldn’t catch. “You irritate me like no one else on the planet, do you know that?”

“Yes,” she replied, even though it was a probably a rhetorical question. “So, which way to your camp?”

Enter to win one of five copies of Her Dark Half by Paige Tyler!