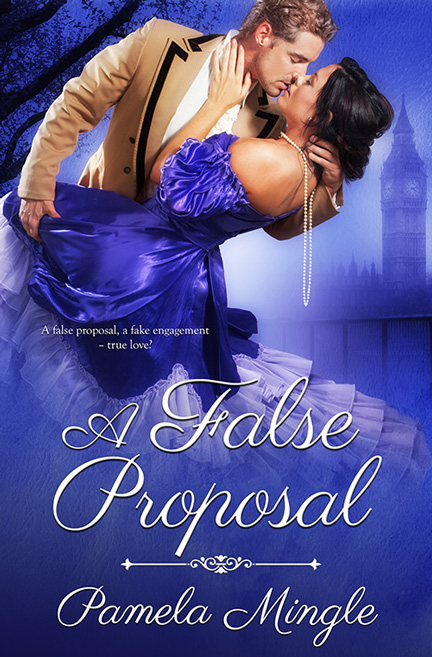 Meet Entangled author Pamela Mingle and learn more about her and her new release, A FALSE PROPOSAL!  From Pam: I live and write in Lakewood, Colorado. My husband and I love traveling to England, where we often do continuous walking trips. That means going from one town to the next, on foot, sometimes 15 miles a day! … I have a new book coming from Entangled Select Historical in June of 2016. It’s a Regency romance called A FALSE PROPOSAL. Welcome Pamela Mingle!  I am so glad you could join us here at Romance Junkies. We have a few questions for you. When was the moment that you knew you had to be a writer?

I’ve known since I was a child. I sometimes cried when I finished a book I loved, and must have decided that the only way to ease that pain would be to write my own stories. It took me a long time to see that dream come to fruition, but I guess life got in the way. 🙂

Writer Carol Berg, in a workshop. “Characters must do what they hate. That makes conflict.”

Smart, strong, attractive, likeable. That would be in real life! For romance fiction–add deeply flawed in some way to the mix. This could describe a multitude of romantic heroes; the trick for writers is to imbue their heroes with qualities that separate them from the pack.

Reading, of course! I’m a knitter, although I haven’t had much time for it lately. And I collect antique silver spoons.

My husband and I have done several continuous walks in the UK, sometimes as far as fifteen miles a day—a real challenge for me! Sometimes we bring a group of friends, which makes the time and distance seem much easier.

The Isle of Mull, in Scotland. It’s so beautiful–the perfect place to dream and relax and find peace. It’s in the inner Hebrides, so it’s not that easy to get to, unfortunately.

I’m willing to try almost anything. I even tried deep fried Rocky Mountain oysters (bull’s testicles) once. Ick. One exception—I’ve never been able to make myself taste haggis, that ancient Scottish pudding comprised of sheep’s heart, liver, and lungs.

Thanks again for blogging with us! And check out Pamela’s A FALSE PROPOSAL below. A False Proposal by Pamela Mingle

War hero Adam Grey returns home with a burning ambition to run for Parliament. But he needs the support of the local baronet, who controls the seat. Adam’s plans are thwarted by his dissolute father, who has promised him to the baronet’s daughter in return for forgiveness of his debts. Adam wants nothing to do with marriage or his father’s problems, so he fakes an engagement to Cass Linford—his best friend’s sister.

Cass has been through hell since she last saw Adam. Her betrothed committed suicide, forcing her to withdraw from London society. Heartbroken, she’s given up on marriage. So when Adam suggests a temporary engagement, she agrees. He needs help with his campaign, and Cass can’t resist his charm or the chance to be involved in politics. It all seems so easy, until she finds herself falling in love with her fake fiancé.

“I’m shocked to find you as yet unmarried, Cass.”

She didn’t seem ashamed or embarrassed, and Adam realized he was relieved. As soon as he’d spoken those words, he’d wanted to snatch them back. “And why is that? I can’t believe you’ve had no offers.”

Jack, who’d said little during the exchange between his friend and sister, now spoke up. “Cass was engaged at one time. I suppose you didn’t hear.”

He raised a brow, appealing to Jack. But Cass answered.

“My engagement is none of your affair, Ad—Mr. Grey.” She glared at her brother, who bit back whatever he’d been about to say. Damn. Adam would have liked to know why, if she’d been engaged, she was not wed. It should be easy enough to find out. That kind of story made irresistible fodder for the gossips in the ton, including his own mother.

“You are not married, but were once engaged. Did he cry off?”

Cass’s eyes darkened at the direct hit. “The reason I am not married is personal and private. Not to be discussed outside the family.” She looked directly at Adam, her gaze frank and appraising. “Since women are subject to their husband’s whims, why should I want one, anyway?”

I live and write in Lakewood, Colorado. My husband and I love traveling to England, where we often do continuous walking trips. That means going from one town to the next, on foot, sometimes 15 miles a day! It was on one of these walks I discovered Hoghton Tower, the setting of my debut YA novel, KISSING SHAKESPEARE, which released in August 2012. KS won the Colorado Book Award in 2013 for Young Adult Fiction.

I have a new book coming from Entangled Select Historical in June of 2016. It’s a Regency romance called A FALSE PROPOSAL.

Besides historical fiction, I love mysteries, mainstream, YA, and fantasy. And I love finding out what other people are reading.