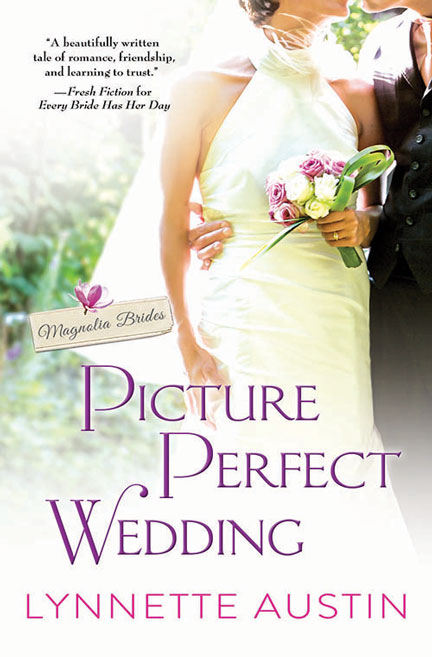 From Lynnette Austin comes a wonderful story of second chances in PICTURE PERFECT WEDDING. ♥♥  I love second-chance romances—both to read and to write! Our couple’s first chance has generally happened before the book begins, and, then, they meet again—with all the ensuing angst. This is no slow-build relationship but rather a raging inferno from the get-go with the chemistry and connection full-blown on page one. I love second-chance romances—both to read and to write! Our couple’s first chance has generally happened before the book begins, and, then, they meet again—with all the ensuing angst. This is no slow-build relationship but rather a raging inferno from the get-go with the chemistry and connection full-blown on page one.

The once-lovers often face-off as enemies; the conflict is built in. Something caused their relationship to implode the first time around. When they meet again, that problem remains unresolved. If they couldn’t solve it before, how can they hope to now?

On top of that, neither the hero nor the heroine has remained in a vacuum during their “away” time. They’ve both had lives for these two or five or ten years. Both have changed, and those old emotions, resentments, and frustrations have had a chance to fester.

Picture Perfect Wedding, the third book in my Magnolia Brides series, is a second-chance-at-love story. When Tansy Calhoun left for college, she promised to return to Beck Elliot, who stayed behind in Misty Bottoms, Georgia, to save the family business. She reneged on that promise and married someone else, had his baby.

Five years later, divorced and broke, she and her daughter return to Tansy’s small hometown to create wedding cakes for Magnolia Brides. The question isn’t whether or not she and Beck will fall in love but rather will either take a chance on risking his heart again.

One mistake can change everything…forever.

If you love this trope as much as I do, I’m sure you have favorites! Here is one of mine:

Ain’t She Sweet by Susan Elizabeth Phillips. Sugar Beth Carey ruled Parrish, Mississippi, fifteen years ago. When she left town, she left behind a lot of hatred and resentment, all well-earned. Collin Byrne’s animosity is almost a living entity.

At the story’s start, this golden girl crawls back to Parrish with her deceased third husband’s dysfunctional dog and barely enough money to feed herself and put gas in her car. One of the feistiest heroines ever, it’s a veneer. She’s the girl you love to hate, the one who made high school a living hell. Yet, under Phillips’ expert hand, I found myself rooting for Sugar Beth, and, once the reason for her behavior was exposed, I wanted her to rise like the phoenix. Sugar is fighting for a second chance both at love and redemption.

My guilty confession—I’ve read Ain’t She Sweet at least six times, and, every single time, I cringe at the fork-under-the-table incident. I’m not telling. You’ll have to read it for yourself.

What’s your favorite second-chance romance? Why? One mistake can change everything…forever

Beck Elliot and Tansy Calhoun were inseparable—until Tansy left Misty Bottoms, Georgia, promising to come back after she finished school. Beck stayed behind to save the family business, dreaming of the day when Tansy would return. Instead, his trust and his heart were broken when she inexplicably married another man and bore his child.

Five years later, Tansy comes home, a sadder and wiser woman. Despite his anger, Beck finds it hard to avoid her and her adorable little daughter—especially with all the busybodies of Misty Bottoms going out of their way to throw him and Tansy together, hoping a lingering spark will reignite their enduring flame…

In a perfect world or, heck, even in a movie, music would play softly in the background. The SUV’s windows would be down, her auburn hair blowing softly in the breeze. Her hero would wait at the road’s end, arms open and welcoming.

“Still a few miles from town, but almost there.”

“Good. Great. Listen, I know this has been a stressful day, heck, a stressful year, and you’re tired…”

Tansy smiled. She could practically see her friend squirming. “What do you need, Jenni Beth?”

“Oh, Tanz, I have two weddings and a sixteenth birthday party coming up this week. Magnolia Brides is booked solid for the next nine months—my dream come true—but I’m dying here! I need cakes. Phenomenal cakes. Your cakes!”

“Kitty said you can use the bakery’s kitchen.”

Tansy sighed and ran her fingers through already-mussed hair.

“I know, I know.” Jenni Beth’s tension vibrated over the airwaves. “I’m putting you on the spot. Big-time. I’m a horrible person. An even worse friend.”

“No, you’re not.” Determined, Tansy sat up a little straighter. “This is exactly what I’ve insisted I want. Part of the reason I’m on my way home. Color me stupid, but I’m in.”

As the city-limits sign loomed, she hung up and removed her dark glasses. Misty Bottoms, Georgia. The Low Country. Even slowing to a crawl didn’t stop the inevitable.

Right back at the starting gate.

Waiting for her? No music, no hero, and no kiss.

And no one but herself to blame.

Tansy pushed her sunglasses back in place and glared at the brilliant sunshine that bathed the beyond-gorgeous autumn day. The humidity had dropped, and a few white clouds drifted high in the bluebird sky. Shouldn’t it be raining, the sky dark with ominous thunderheads?

Divorced for fifty-three days, five hours, and—she checked the dashboard clock—six minutes, and here she was, hell-bent on creating the cake for a bride’s special day.

She’d had her own shot at the dream and lost—because the wrong groom stood beside her at the altar.

Walking out of her supersized house that morning had been confusing. She’d expected a huge weight to lift, and it had. Still, that was the house she’d brought Gracie home to after she’d been born. Where her first four birthdays had been celebrated. Christmases and Thanksgivings.

And so much unhappiness and deceit.

A building off to Tansy’s right caught her attention and caused a hitch in her heart. Elliot Construction and Lumberyard.

Beck Elliot, the groom behind door number one, the door she hadn’t chosen.

Oh boy. Was she making another mistake? Should she have started over somewhere else?

Relieved, she flipped on her turn signal, veered into the lot, and pulled up to the gas pump.

And there it sat.

A big red truck with Elliot Construction on the side.

The door to the gas station opened, and Beck Elliot, looking hotter than any man had a right in dusty jeans, a faded T-shirt, and old work boots, stepped outside.

He tore the wrapper off a candy bar and took a bite.

Then his intense, midnight-blue eyes met hers. The chill had her rubbing her arms even though the temperature read seventy-five in the shade.

As she got out, her gaze collided with Beck’s again.

Hers? She figured they held remorse, hurt, and impossible-to-deny desire.

Beck nearly choked on the bite of chocolate. What the hell?

He tossed the bar into the trash barrel outside the door.

Months ago, he’d heard rumblings that Tansy’d enrolled her daughter in the local preschool, but since no one had said anything else about it, he’d figured she’d changed her mind. That fancy SUV of hers was loaded to the roof, though, way more than she’d need for a quick visit.

His chest constricted, and he swore under his breath. Why would she return to Misty Bottoms? She looked like one of those emaciated French models in the magazines his mom read. A good strong wind off the coast would blow her from here to Atlanta.

Not his business—and she’d be the first to tell him that.

“Thanks. I left the money on the counter. Later, pal.”

Without another word, without another glance toward the woman he’d once expected to marry, Beck hopped in his truck, turned the key, and pulled out of the gas station, reminding himself that Tansy Calhoun—no, make that Tansy Forbes—was history. Ancient history. LYNNETTE AUSTIN gave up the classroom to write full time. An author of eight novels, she has been a finalist in RWA’s Golden Heart Contest, PASIC’s Book of Your Heart Contest, and Georgia Romance Writers’ Maggie Contest. She and her husband divide their time between Southwest Florida’s beaches and Blairsville, GA.