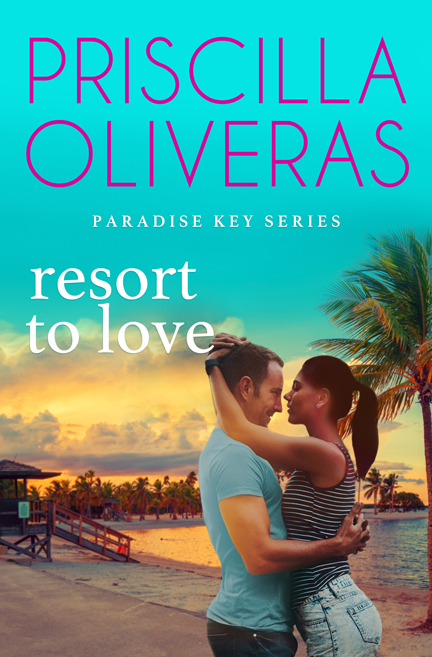 With a tag line like “Because love is better at the beach,” it’s only natural that the four of us authors who teamed up to create our Paradise Key series had a fantastic time getting to know each other, our fictional sleepy beach town, and the wonderful characters that inhabit the pages of our books.

I’ll be honest; this was my first continuity series. So, I approached it with a mix of trepidation and excitement. As a newly published author, I’d spent a long time inhabiting my own story world, playing with the characters that had danced around inside my head for so long they’d become real people to me. But now I was venturing into a totally new story world, where others would be helping to decide key details—like setting, main and secondary characters, town history, where to put the ice cream parlor (very key detail if you ask me!), and more.

Plus, not only were we writing about characters that knew each other and were a significant part of each other’s lives, three of the four books were concurrent. That meant, our couples were falling in love, fighting and making up, and experiencing the highs and lows of romance while also interacting with characters in other books.

For instance, when my Sofía heads to Scallywags to meet her besties (Jenna, Lauren, and Evie) in RESORT TO LOVE, you’ll find a similar scene, from another one of the girls’ perspective, in that friend’s book! When Nate sits at the bar, brooding because he’d like to be joining the girls and Zach at their table, but he knows he wouldn’t be welcomed…Jenna’s over there worrying about pulling off her and Zach’s fake-boyfriend scheme that’s the crux of book 2: LOVE AT THE BEACH SHOP.

This might sound like a logistics nightmare, and I’ll admit I had a bit of a “what did I get myself into” panic when I sat down to plot and write (waving to the authors who are plotters or plotsers, like me). However, if you team up with authors who communicate well, have a sense of humor, are dedicated to their characters and craft, and genuinely care about others and forming new friendships…let’s just say you wind up creating a series that feels absolutely right.

That’s honestly how I feel about our books and the people we love who call Paradise Key home.

After all our planning and email swapping—about the books themselves and about the ups and downs we experienced in our personal lives as we took Paradise Key from idea to production—I hope you’ll decide to spend a little time with our couples. That you’ll enjoy meeting and falling in love with my Nate and Sofía, two strong-willed individuals who just might be able to find their way back to each other, if Nate works hard enough and Sofía can forgive him.

As winter finally melts away, come join us at the beach…or in a quiet reading corner wherever you are…and let us transport you to Paradise Key, where the skies are blue, the surf warm, the sand comfy on your bare feet…and mostly importantly, where love always finds a way.

Here’s a little peek at Nate and Sofía…

At the corner of Second and Depot, Nate checked his phone while waiting for a van to pass the intersection. He glanced up, the breath whooshing out of him when he spotted her.

Coffee cup in hand, Sofía Vargas stood on the sidewalk in front of Paradise Key Resort.

The wind ruffled her long black hair, and she tossed it back with a jerk of her neck. Nate’s gut clenched. How many times had he seen that same gesture, paired with a cheeky grin or a sexy smirk, aimed his way?

It’d been two years since they’d been together. Two years since she told him not to contact her again. And yet, he’d know that athletic, curvy-hipped figure anywhere. His fingers itched to touch her again.

Before he realized it, Nate had crossed the street toward her. As he stepped onto the sidewalk, she spun around to leave, inadvertently running smack into him.

“Oomph,” she grunted. The lid on her coffee popped off, the contents of her cup splashing dangerously close to the rim. “Ay Dios mío, I’m so sor—”

She broke off on a gasp, her shock at seeing him telegraphed in her wide hazel eyes.

Her sleeveless light purple sundress hit her mid-thigh, leaving her tanned shoulders and shapely legs bare. Just like he remembered, she looked sun-kissed and amazingly beautiful. Definitely a welcome sight for his sore, bloodshot eyes.

“What are you doing here?” she asked, never one to beat around the bush.

He, despite the surprise of running into her, knew better than to reveal his cards when it came to business. Especially to an ex-lover with close ties to this town. Until he’d gleaned all the info he could from Braddock, and learned whether there were other players in the mix for the resort, he was simply passing through.

Sofía’s narrow-eyed glare told him he’d laid the schmooze on a little too thick. He’d never been able to easily pull a fast one on her.

“Fine. You caught me. There’s a property in Sarasota the family’s interested in.” True enough. If this deal fell through, he’d be headed south to the other beach town. “I had a few days to kill, so I figured what the hell.”

He lifted a shoulder, letting it fall with a lazy shrug.

Sofía mimicked his gesture. “Sure, what the hell. For old time’s sake, right?”

Whether she intended to or not, her jab hit him like a cheap shot in the gut.

That had been his line. One he’d used over the years whenever he’d given into the urge to see her again, and had shown up on her doorstep. Or convinced her to meet him somewhere for a weekend getaway.

Until he’d told her about his father’s demand he put a ring on Melanie’s finger—a smart business move for both their families. Until Sofía hadn’t asked him not to do it.

That’s when he’d finally understood that her “no-strings-attached” edict wasn’t merely something she flippantly tossed around. She meant it. The part of herself he’d felt she held back from him for some reason would always be a roadblock between them.

His gaze slid past her shoulder to take in Paradise Key Resort, the once-flourishing property now worn and dilapidated. Tired-looking.

Kind of how he felt lately. Questioning the decisions he’d made in trying to please his father. Keeping the peace like his mom in her delicate nature preferred.

The businessman inside him recognized the property’s state of disrepair as good news. It would drive the price lower. Make his offer to take the blighted property off the city’s hands to bring it back to its old glory an even sweeter deal for the city commissioners. It’d be a bid they couldn’t refuse.

He needed this to go smoothly if he wanted his dad off his back.

More importantly, it would help him get his head back in the game.

Sofía’s brow creased in a moment of confusion before she angled her body to look back at the resort. “No, it’s kind of sad. Though inevitable, I guess, after the owners bailed on her.”

“We had some great times there, didn’t we?”

The words slipped out before he could stop them. Damned memory lane and the potholes he couldn’t manage to swerve around, even in his mind.

Sofía’s chest rose and fell on a heavy sigh. She ducked her head, her curtain of black hair draping to shield her face.

The urge to reach out and tuck her hair behind her ear, cup her cheek, lean in for a kiss, was stronger than his need to breathe. But he didn’t have the right to do that anymore.

She’d taken that away from him when she’d asked him not to contact her again.

Right after his engagement with Melanie had hit the business news ticker.

“Yeah, we did, but—” With her trademark hair toss, Sofía straightened to stare back at him. Determination sparked in the golden hazel depths of her eyes. “But that’s in the past. And it does no good to go there. Not for me anyway.”

“Always looking ahead, aren’t you? Eyes on the prize,” he answered.

When it came to her career, she’d been laser-focused since they’d started college—him at Harvard, her at the University of Florida. Their first spring break, she’d planned to spend the week working on summer internship applications. He’d had to practically drag her to Daytona Beach for a few days of fun together.

“That’s me. No rest for the weary,” she countered.

The heavy note in her voice drew Nate’s attention away from the property’s for-sale sign.

Several cars made their slow drive past them, probably tourists cruising the main drag, peering in the windows at the wares and offerings in the tiny shops and businesses. The chime of a biker’s bell tinkled a greeting, and the rider rolled by them.

But Nate’s focus stayed on Sofía and the faint circles shadowing the skin under her expressive eyes.

Despite the “back-off” vibe her stiff posture exuded, he knew her well enough to tell that something was wrong. If there was one thing he’d never been able to ignore when it came to Sofía Vargas, it was his desire to always look out for her. Put her needs before his. Even if that need was a distance he didn’t want.

“Are you doing okay?” He placed a comforting hand on her forearm. “You want my help with—”

“No! I’m good.” She took a hasty step back, and Nate let his hand fall at his side. “Look, I gotta go. I’m meeting the girls at Scallywags in a few. Good luck in Sarasota.”

She slipped past him, ready to walk out of his life. Again.

She turned around, one eyebrow arched in question.

A pained expression passed over Sofía’s face. Her lips opened and closed as if she struggled for words. When she finally spoke, her voice was a husky whisper. “Thanks, I-I’ll pass that along.”

Shirley, Kyra, Susan, and I have put together a little beach bag of goodies for you. If you’d like a chance to win a tropically-floral Vera Bradley purse and a $25 Starbucks gift card, click the link to our Rafflecopter giveaway. Note, there are multiple opportunities to enter on the page. And, if you’d like a chance to win a digital copy of my debut novel and 2018 RWA® RITA® double finalist, HIS PERFECT PARTNER, comment below and let me know: PRISCILLA OLIVERAS is a 2018 RWA® RITA® double finalist who writes sweet
contemporary romance with a Latinx flavor. Proud of her Puerto Rican-Mexican heritage, she strives to bring authenticity to her novels by sharing her Latinx culture with readers. Her debut release, His Perfect Partner, and the second book in her Matched to Perfection series, Her Perfect Affair, both earned Starred Reviews from Publishers Weekly and Booklist. Since earning an MFA in Writing Popular Fiction from Seton Hill University, she serves as English adjunct faculty at her local college and teaches an on-line course titled “Romance Writing” for ed2go. Priscilla is a sports fan, a beach lover, a half-marathon runner and a consummate traveler who often practices the art of napping in her backyard hammock. To follow along on her fun-filled and hectic life, visit her on the web at www.prisoliveras.com, on Facebook at www.facebook.com/prisoliveras or on Twitter via @prisoliveras.