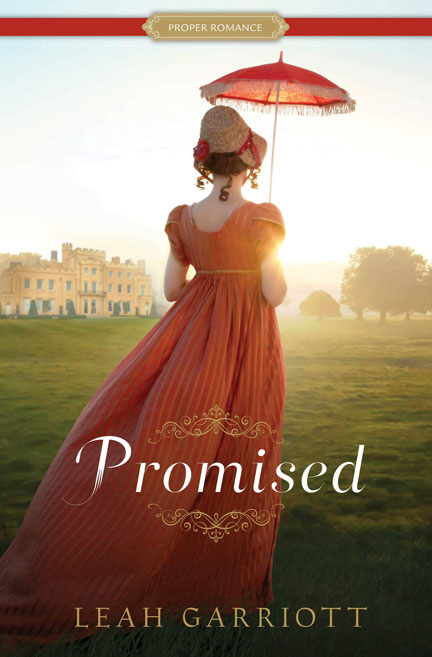 In PROMISED by Leah Garriott, Margaret Brinton keeps her promises, and the one she is most determined to keep is the promise to protect her heart.

“Garriott’s impressive debut distinguishes itself with its expertly evoked Regency setting, a cast of realistically flawed yet eminently relatable characters, and a sweetly satisfying love story. Teen fans of Austen-era love stories will fall hard for this impeccably crafted romance.”—Booklist

“Promised is a sweet regency romance and one that I recommend to all of you romance fans, especially those of you that enjoy stories inspired by Jane Austen.”—The Book Diva’s Reads

“…a fun, entertaining, and perfect addition to the Proper Romance collection.”—The Readathon

“With an Austen-like focus on minute emotional detail and some amusing secondary characters, Garriott’s gentle novel promises a treat for Regency fans who like their characters well-bred, their interiors comfortable, and the romance no racier than the hero turning up in a wet shirt.”—Historical Novel Society Hi Romance Junkies!! I’m thrilled to be a guest blogger today. And what better way to celebrate than talking about what we all love best—Romance!

Romance comes in many forms and heat levels. There’s the slow build of a chaste courtship to jumping right into a wild ride, and the historic Medieval knight’s tale to the contemporary erotica to fantastically wicked dragons and werewolves. In the past decade the genre has opened up to allow tales not possible before, both in terms of heat and in terms of scope. What a wonderful time to be a romance junkie!

I myself write the sweet historical stuff reminiscent of Jane Austen and Georgette Heyer. Good Regency romance has a spot in my heart with its built-in rules and resulting social tension. It has been so fun to write something that plays with and maintains those rules while also pushing boundaries.

Georgette Heyer is seen as the founder of the historical romance and the creator of the Regency subgenre, which deals with the period in England between 1811 and 1820 (or the late 1830s, depending on how you define England’s historical eras). Her focus on the aristocratic elite (or ton as they are now called), her creation of humorous characters, and her inclusion of wild fun have become the standard of Regency romances for ages, ensuring that a good majority of us wish to escape into the 1.5% titled gentry of the era.

A little while later, sex was introduced into the genre and thus was born the bodice ripper. In the 1980s the sweet inspirational line was created and marketed as Christian fiction, thus fashioning two paths in the Regency subgenre—that of the low-heat, mostly-religious-themed Regency and that of the sexually-enticing romper. Little has been found in the space between until more recent years, when authors have begun writing the sweetness of the Christian romance without the religion. Self-publishing has been a boon in this area as well.

It’s no wonder that this subgenre is alive and well today, with trends showing an increasing readership in certain areas. Considering history books are full of men, it’s a relief to read books about women by women. We see into the lives of (albeit mostly fictional) women, learn how they managed their relationships and their day-to-day, how they found love without having to compromise or subdue who they truly were, and it inspires us to be and do the same.

Though sweet historical romance isn’t what some enjoy, it can be a more accurate portrayal of Regency-era life. In a time when a woman’s virtue defined her worth and when women were forbidden to be alone with a man, how else could they communicate their interest but with a glance, a brush of the arm, a smile and a small laugh? Crafting such a romance isn’t easy in today’s world, where we’re impatient for the spark to ignite into a fire. But in certain stories, that slow, steady burn can be just as gripping as the blowtorch of passion erupting within the first few chapters. And, let’s be real, even with the blowtorching stories, isn’t it the moments of tenderness, the kind words and thoughtful actions, the small looks that say, “You’re important to me and I care about you,” that really cement someone in our hearts and make them the true heroes of romance?

Isn’t that really what we want—to be seen as, and appreciated for, the fantastic creatures we are? This world would certainly be a better place if everyone read a little more romance. So, here’s to romance, and more importantly, here’s to romance junkies like us! Margaret Brinton keeps her promises, and the one she is most determined to keep is the promise to protect her heart.

Fooled by love once before, Margaret vows never to be played the fool again. To keep her vow, she attends a notorious matchmaking party intent on securing the perfect marital match: a union of convenience to someone who could never affect her heart. She discovers a man who exceeds all her hopes in the handsome and obliging rake Mr. Northam.

There’s only one problem. His meddling cousin, Lord Williams, won’t leave Margaret alone. Condescending and high-handed, Lord Williams lectures and insults her. When she refuses to give heed to his counsel, he single-handedly ruins Margaret’s chances for making a good match—to his cousin or anyone else. With no reason to remain at the party, Margaret returns home to discover her father has promised her hand in marriage—to Lord Williams

Under no condition will Margaret consent to marrying such an odious man. Yet as Lord Williams inserts himself into her everyday life, interrupting her family games and following her on morning walks, winning the good opinion of her siblings and proving himself intelligent and even kind, Margaret is forced to realize that Lord Williams is exactly the type of man she’d hoped to marry before she’d learned how much love hurt. When paths diverge and her time with Lord Williams ends, Margaret is faced with her ultimate choice: keep the promises that protect her or break free of them for one more chance at love. Either way, she fears her heart will lose. Though she earned degrees in math and statistics, Leah Garriott lives for a good love story. She’s resided in Hawaii and Italy, walked the countryside of England, and owns every mainstream movie version of Pride and Prejudice. She’s currently living her own happily ever after in Utah with her husband and three kids. Leah is represented by Sharon Pelletier at Dystel, Goderich, and Bourret.

2 Responses to Promised by Leah Garriott