I invite readers, writers, and all interested romantics to come join in the discussion of prostitution in the Old West!

I want to thank Kim and Jenn at RomanceJunkies for allowing me this opportunity to guest blog today, helping me showcase my latest historical romance, THE PARLOR HOUSE DAUGHTER. I’ve taken my “book talk on Prostitution in the Old West” on the virtual road and am so very grateful to RomanceJunkies for this opportunity to chat with you today. Many of you already know a great deal about prostitution in the Old West, but you might discover a few things here you didn’t know. Tune in and let’s have fun, finding out!

<!–[if !vml]–><!–[endif]–>If, in the mid-19th century, women traveling west didn’t happen to be married, they “happened” into the world of prostitution. How difficult it must have been for either path chosen, given the restrictions and dictates of the Victorian Era in America. It’s no wonder that moral women feared sex and intimacy and so-called “immoral women” benefited from such fears. Acceptable for men—the double standard being alive and well in the 19th century—it was common for men to frequent bordellos and parlor houses or to take on a mistress. Two of the most famous men in Colorado’s colorful, turbulent history, Horace Tabor and William Byers, were linked with rumors of having a mistress. More than rumor, Willam Byers’ mistress tried to shoot him on his front lawn in front of his wife, Elizabeth.  Horace Tabor fared better, marrying Baby Doe. 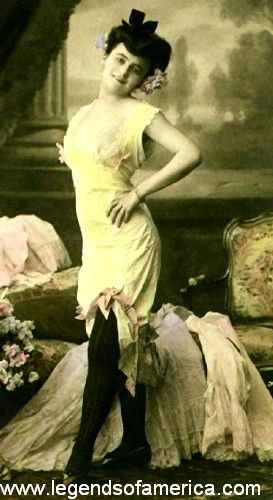 <!–[if !vml]–><!–[endif]–>In Denver, the Queen City of the Plains, it was common for the legislature to let out early if a new parlor house was opening for business. Remnants of the old tunnel system leading from the state capital, used for such nefarious, pleasurable activities, are still in evidence today. This fact, however, is not what led me to write about the shadowy world of prostitution in historical Colorado in my latest Five Star-Gale release, THE PARLOR HOUSE DAUGHTER, but the fact that in 1880, along a six block stretch of what is today Market Street—over one thousand women “worked the line.”I had to find out about these women! I had to find out how they survived violence and drugs and disease and melancholy. I needed to know the “how” of their survival. Call it the nurse in me, but I wanted chapter and verse on how a prostitute made it through her day; whether in a crib at the “end of the line” in some rugged mining camp, or in a fancy parlor house at the “top of the line.”  Until I involved myself in research for this book I never realized where the saying came from, “the end of the line.”

<!–[if !vml]–><!–[endif]–>Another term that popped out of my research is the term, “hippie.” I discovered that the term likely comes from the fact that customers frequenting Hop Alley in Denver were led to a cot with a little table on which drug necessities were placed. A basin was provided as well. The customer would be placed on their “hip” and left alone. Placed on their side, often getting sick from the toxicity of the opium pill, the customer would often throw up in the basin. Placed so, the customer wouldn’t suffocate. Thus the term, “hippie.” As many of you likely know, there was a symbiotic relationship between prostitutes and the Chinese, each watching out for the other, each having a shared interest in their livelihood.

As many of you also know, most men loved to love a prostitute, and treated them with respect, even in the most bawdy and rugged mining towns. I must say, I was surprised to learn, however, that in the mining towns, on a Friday—pay day—it wasn’t unusual for one prostitute to turn 50 to 80 tricks! The men lined up outside, never taking their boots off (those rascals) once inside. In the lesser bordellos, and certainly the one room cribs, sheets were rarely changed, certainly not in between tricks. Prostitutes would place a rubber sheet or oilcloth over the bottom of their cot to keep their customers’ muddy boots from doing even more damage. There was little to no washing done in between customers. Imagine the disease transmission of the day!  Imagine, too, the level of fear and violence many women faced on a daily basis. It wasn’t an easy environment on any account.

<!–[if !vml]–><!–[endif]–>Streetwalkers and those women relegated to cribs represented the “end of the line” for prostitutes, earning twenty-five to fifty cents a trick. These women were either too old, too ugly, cut up, diseased, or hooked on opium to secure a place in any of the higher-end brothels. Hurdy-Gurdy gals did not turn tricks, but rather, did take a “turn” on the dance floor with customers. Hurdy-Gurdy gals and prostitutes, in fact, hated each other. No friendly camaraderie here! Bartenders and professors (piano players) were revered by all the women, hurdy-gurdies and prostitutes. To catch the eye of a bartender or professor was a lucky day, indeed. To marry a bartender or professor was “the mother lode!”

Prostitutes who worked in fine parlor houses represented the “top of the line,” earning fifty dollars a customer, and usually only entertaining one customer a night. Their madam—who never missed a trick or detail about her “girls” or their guests—and any bouncers hired, protected them. They made good money but usually didn’t see much of it. Most went for clothes and monthly doctor exams and expenditures related to the up-keep of the house and their rooms and entertainment costs. A good house usually had ten to fifteen rooms for the “girls” located upstairs. Downstairs was decorated like a palace, with parlors and dance floors and mirrors and a fine piano … serving the best food and champagne the city could offer.

To address my initial statement as to how prostitutes survived during such tough times and under such conditions … the true answer is that many did not. The average age to enter the profession was fifteen, as this was usually when a girl started her cycle. Today it’s much earlier, but in the mid-19th century it was fifteen.

<!–[if !vml]–><!–[endif]–>Many prostitutes stayed in the business until the age of thirty, give or take. If the girls were lucky enough to reach thirty, that is. You can imagine that in some of the lesser houses, and certainly in cribs or on the street, many of the women took their own lives due to severe melancholia. Often without the support of family and friends, and often alone during holidays, many ended their lives, swallowing a vial of opium. Violence was common, too, and many were killed, either by accident or on purpose. Disease afflicted many prostitutes at the end of the line, due to unsanitary conditions; not to mention lack of nourishment.

Two things about prostitution in Colorado’s colorful history surprised me. I didn’t realize there were so many levels of prostitution, and I never before realized that we all owe them a debt of gratitude for truly softening the West and bringing some degree of civility to an uncivil territory. These wonderful women are our true heritage here in Colorado. I say “hazzah” to Mattie Silks and Jenny Rogers in Denver and “hurrah” to “the lady on the barroom floor” in Central City! 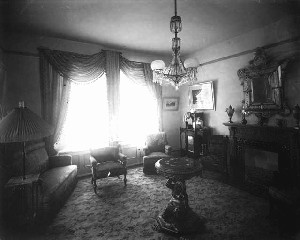 <!–[if !vml]–><!–[endif]–>I would love to know if any of you—if you could—would step back in time now, right onto the pages of THE PARLOR HOUSE DAUGHTER, and trade places with vulnerable, determined Rebecca Rose … and put your life at great risk, daring to fall in love with unreachable, aggravatingly handsome Morgan Larkspur? What has your research led you to discover about prostitution in the Old West? Were any of you like me, and thought all Legends in Lace were like “Miss Kitty” on Gunsmoke? Can any of you imagine how tough it had to have been to “work the line?”  Do any of you have questions re other aspects of prostitution? Brass check, anyone? heh heh

“This is historical romance of a satisfying order.” PUBLISHERS WEEKLY

“A classic western story of the good, the bad, and the ugly.”  BOOKLIST

“I recommend it.” RRT

48 Responses to Prostitution in the Old West with guest blogger, Joanne Sundell