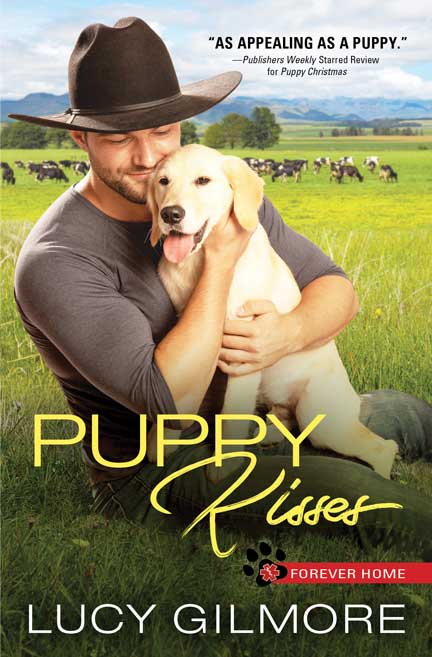 In PUPPY KISSES by Lucy Gilmore, Dawn Vasquez never takes life too seriously. But when she rescues a golden retriever named Gigi, Dawn begins to imagine what it’d be like to settle down and let someone rely on her for a change. Unfortunately, Adam Dearborn—a handsome, hopelessly buttoned-up cattle rancher in need of a guide dog—has also fallen in love with the little ball of fluff and stubbornly insists that no other animal will do.

Adam isn’t sure what drives him to fight to keep Gigi for himself, but he suspects it has something to do with his growing—and unfortunate—attachment to Dawn… These adorable service puppies are matchmakers in the making…

Dawn Vasquez never takes life too seriously. But when she rescues a golden retriever named Gigi, Dawn begins to imagine what it’d be like to settle down and let someone rely on her for a change. Unfortunately, Adam Dearborn—a handsome, hopelessly buttoned-up cattle rancher in need of a guide dog—has also fallen in love with the little ball of fluff and stubbornly insists that no other animal will do.

Adam isn’t sure what drives him to fight to keep Gigi for himself, but he suspects it has something to do with his growing—and unfortunate—attachment to Dawn. Her whirlwind spirit and sunny disposition might make her a delight to be around, but they also make her unsuited for the difficult life of a rancher. He should be able to put her out of his head. But what’s a love-struck cowboy to do when what he wants and what he needs have never seemed so far apart? And can he allow himself to take a chance on everything Dawn has to offer: puppy kisses, puppy love…and her.

Mentioning her lips had to have been some kind of tactic. Just the word—lips—had him remembering their shape and size, the way the bottom one was so much plumper than the top, how good they felt when pressed against his bare skin. She always warned him to scrub hard before he met up with any other women, since she left a trail of lipstick all over his body.

He wasn’t seeing any other women, but there was no way he was telling her that. She already had him under her spell. He didn’t need to be under her power as well.

“Thank you for the offer,” he said tightly. “But I already like—”

“—the one you can’t have,” Dawn finished for him. She was definitely closer now, the unmistakable nonscent of her mixing with the hay and dirt to whirl his senses. “That seems to be a sort of thing with you, doesn’t it?”

“As I recall, I’ve had you plenty of times already,” he said, a challenge in his voice. “In fact, I bet I could have you right here and now.”

Adam didn’t know if he was the one who’d drawn closer to her or if she’d stepped up to him, but there was no longer anything between them. Not a puppy, not air, definitely not common sense. The jut of her breasts pressed softly against his chest, the toes of her shoes touching the tips of his work boots.

His hands suddenly decided they had minds of their own. Moving forward to clasp her around the waist, they touched silky fabric and heat and a patch of skin where her shirt didn’t quite reach her waistband. That alone should have been enough to stop him—what kind of a person wore a tiny, silken shirt to a working ranch?—but of course he didn’t. That touch of skin set off something inexplicable inside him.

It always did. That was the problem. Words could be ignored and the sound of her laughter pressed deep down inside him, but one graze of his fingertips on her body and he was lost.

“I’ve always wanted to have sex on a pile of hay,” Dawn said, calling his bluff. She arched into his touch, allowing his hand to slide up her back. He encountered nothing but soft skin and the gentle curve of her spine, both of which promised more of the same, should he give in and really cop a feel. Which was tempting for a lot of reasons, including the fact that Dawn was stacked in ways that seemed wholly against nature. “Surely there must be one or two of those in the barn we could try?”

“There are.” He brought his lips close to her ear, though he was careful not to press against the gently pounding pulse below it. The moment the kissing started, all other bets were off—including the one that had a Great Dane puppy at their feet and a golden retriever puppy napping under Phoebe’s desk. That was the one thing he knew for sure. Dawn had come out here with the sole intention of luring him into lowering his defenses, in using her incredible body and the promise of what it could do to get her own way. She wanted Methuselah, and she’d stop at nothing to get her.

Well, two could play that way. In fact, he was becoming something of an expert at this particular game.

“We could slip in there right now, and no one would know where we are,” he murmured. Dawn arched her neck to give him better access, but he didn’t kiss, didn’t touch. Only teased. “I could throw you into the biggest stack of hay and rip this tiny scrap of a shirt from your body.”

A slight, guttural sound indicated how much she liked the direction this conversation was going. Typical. With Dawn, the anticipation, the clandestine nature of their meetings, was half the fun.

Who was he kidding? Where that woman was concerned, it was probably all the fun.

“No one will think to look for us for hours,” he added, still in that low, crooning voice. “It’ll just be me and you, our bodies slick with sweat.”

Dawn’s hips pressed against his, her arms coiling around his neck so that her entire body could melt against him. This was how she always struck, coiled and soft and yielding.

So he struck back.

“Well, that and the snakes.”

Instead of pulling back, Dawn only laughed and clasped her hands tighter around his neck. “Good thing I happen to like snakes,” she said. Her mouth brushed lightly against his, fluttering like a pair of butterfly wings. “Like the alligators, they make such nice shoes. Purses too.”

Even though Adam’s body thrummed with anticipation, burning hot in all the places it touched hers, he kept his tone level. “We also get the occasional badger, even though they’re pretty rare in these parts. Rats are almost a certainty.”

“Why, Adam Dearborn, are you trying to sweet-talk me?”

No, dammit. He was trying to do the exact opposite. Why did this woman refuse to act like a normal human being? She should run at the mention of rats, not press her hips against his until he ached.

“I’m just making sure you know what you’re getting into, that’s all,” he said. His voice sounded strained to his own ears. “Things can get pretty nasty out here in the wilderness.”

Lucy Gilmore is a contemporary romance author with a love of puppies, rainbows, and happily ever afters. She began her reading (and writing) career as an English literature major and ended as a die-hard fan of romance in all forms. When she’s not rolling around with her two Akitas, she can be found hiking, biking, or with her nose buried in a book. Visit her online at http://lucygilmore.com. She lives in the Spokane, WA area.