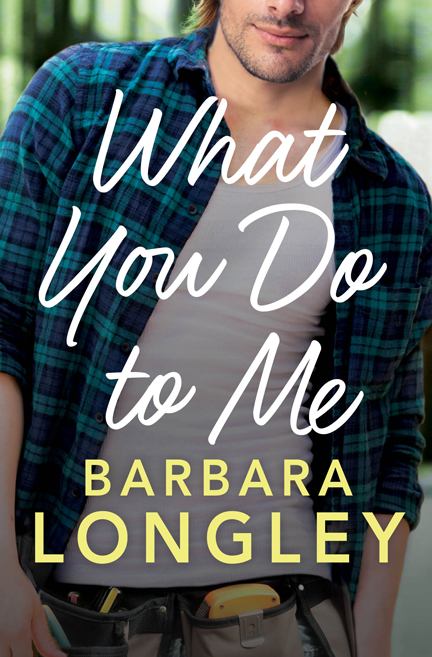 What You Do To Me by Barbara Longley…  Whether it’s repairing a home or taking care of clients’ other needs, Twin Cities handyman Sam Haney is in demand from his mostly female clientele. Despite Sam’s lothario reputation, love isn’t part of his portfolio. He’s built a lot of walls in his time, but the one that’s surrounded his heart ever since the death of his parents is his most solid yet.

Thank you so much for having me! Right now I’m going through the editing process with the second book in THE HANEY’s series, WHATEVER YOU NEED, which involves Sam’s (Hero in WHAT YOU DO TO ME) excruciatingly shy brother, who is an electrician in the family business. Wyatt has a very rich imagination, and he writes and illustrates comic books in his spare time. He’s modeled one of his comic book characters after the pretty neighbor who lives upstairs from him. He’d love to ask her out, but he hasn’t been able to get past his shyness yet. It takes a fire in her apartment to bring them together, but things don’t go smoothly for our poor love-sick hero.

I don’t know that there ever was “a moment.” We moved around a lot when I was young, and I’ve always turned to writing to process whatever was going on in my world. I’ve written a ton of poetry and stories for myself, but it wasn’t until 2005 that I decided to try writing for the purpose of getting published. I’d written a very bad, very purple-prosey romance novel, which has since been deleted from my computer. That first attempt was truly cringe-worthy, but I learned my craft while trying to fix that flawed attempt at a romance novel. I took classes, began to work with critique partners, and now I write full time.

When I was very young, we lived in the Midwest, while my grandparents on both side lived in on the East Coast. I used to write letters to my paternal grandmother. She’d been a teacher up until she married Grandpa, so of course she’d send my letters back to me, marked up with red pencil to correct my grammatical and spelling errors. She told me my sentences were “well-formed,” and she encouraged me to keep writing. I took her advice seriously. I kept writing.

My perfect hero is a strong, confident man, secure enough with his masculinity to show his vulnerable side to his family and friends. Perhaps he’s a little clueless when it comes to women, but he tries. This man would also be the perfect hero for me.

I love Yoga, walking and learning, and I collect books. My latest treat is a nineteenth century edition of Shakespeare’s complete works published in London. When I had my kitchen floor installed, the guy who laid the vinyl used that book to flatten a bubble, because it’s so big and heavy!

My biggest adventure to date was my very first trip to Europe in 2010. My son and I visited London, York, Edinburgh in the UK, and then Dublin, Ireland. I’ve been back since, but there’s nothing like that first trip across the big pond.

Though I can be very outgoing, I’m truly an introvert. My family would describe me as sometimes being . . . overly dramatic, a tad emotional and big-hearted.

I write Celtic fantasy romance as well as contemporary romance and romantic comedy. I’m starting a brand new Celtic fantasy series set in Ireland, involving a young woman of Irish descent who has the ability to see spirits and creatures most of us believed exist only in myths and legends. The hero is one of the legendary commander Finn MacCumail’s elite Fianna, a warrior on par with today’s special forces like Navy Seals, or Rangers. When the H/h meet, Regan believes Fáelán is a ghost who needs help with crossing over. He’s not a ghost. He’s cursed to exist in the void realm of the fae, and maybe Regan is the woman who can free him at last—and this is where their adventures begin, involving the fae, heroic deeds, lots of action and of course, plenty of romance. Title: WHAT YOU DO TO ME

Whether it’s repairing a home or taking care of clients’ other needs, Twin Cities handyman Sam Haney is in demand from his mostly female clientele. Despite Sam’s lothario reputation, love isn’t part of his portfolio. He’s built a lot of walls in his time, but the one that’s surrounded his heart ever since the death of his parents is his most solid yet.

Haley Cooper has had enough heartache for a lifetime. Her high school sweetheart up and moved to Indonesia—alone—just two weeks before their wedding. Her mother thinks it’s time for Haley to move on and contracts Sam to work on Haley’s wreck of a house—and anything else, if he’s got the notion.

Sparks fly and passion ignites. But Haley isn’t into Sam’s love-’em-and-leave-’em act. She wants something more. Fixing a house is one thing, but for this handyman, building a relationship will need a whole different set of skills. Award-winning author Barbara Longley moved frequently throughout her childhood, but she quickly learned to entertain herself with stories. As an adult, she’s lived in a commune in the Appalachians, taught on a Native American reservation, and traveled extensively from coast to coast. After her children were born, she decided to make the state of Minnesota her permanent home. Barbara holds a master’s degree in special education and taught for many years. Today she devotes herself to writing contemporary, mythical, and paranormal stories. Her titles include Heart of the Druid Laird, the Love from the Heartland series (Far from Perfect, The Difference a Day Makes, A Change of Heart, and The Twisted Road to You), and the Novels of Loch Moigh (True to the Highlander, The Highlander’s Bargain, The Highlander’s Folly, and The Highlander’s Vow).