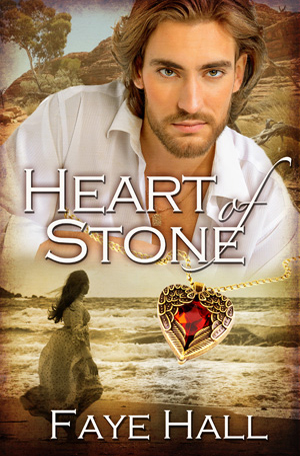 A Q&A with Faye Hall, author of HEART OF STONE.

Ruben wanted a peaceful life, far away from the blackbirding slave trade he had once been involved in. He had watched too many people die on those ships and all for a man’s own greed and want of a ruby necklace. This wasn’t the life he wanted. He wanted peace. A wife. Family.

When the Irish beauty Isabella ran into his arms down on the docks, she stirred feelings in him unlike anything else…

I am so glad you could join us here at Romance Junkies, Faye. To start, will you please tell us a little bit about your current projects?

My latest release, Heart of Stone, will be released 18th September.  This story involves the slave trade that existed in Australia during the 19th century.  It is the tale of an Irish slave, Bella, who becomes involved with a slave trader, Ruben.  There’s also the mystery around a ruby necklace that once belonged to Bella’s family, and the evil slave trader, Samuel Buchanan who will stop at nothing to get it and Bella back in his grasp.

Next Lust & Chastity will be released October 16th.  It is the first book in my Sins of the Virtuous series.  The two main characters, Caitlyn and Darien, find themselves ripped from each other’s arms when Caitlyn’s family moves to Australia trying to escape the obsessed killer chasing her.  When Darien’s dying father begs his son to join his lover, ordering him to protect her at all cost, Darien obeys.  Upon arriving in their new country, both Caitlyn and Darien find themselves involved in the sordid lifestyles surrounding the working women in the taverns, the sale of drugs, as well as trying to discover who was responsible for the constant murders that seemed to follow them.

It would have had to have been when I was a child of maybe 10 or so.  I always loved writing, but it was more that I needed to write.  So many stories in my head, and ideas for characters and conflicts they could experience.  I would dream about these ideas, feel almost haunted by them until I finally wrote them down.  What usually started off as a few lines of an idea more often than not became a few pages by the times I had finished writing.

As I’ve said in interviews before, what pushed me to send a script to a publisher was actually my English teacher who told me quite bluntly that I would never write anything good enough to publish.  When this happened I confided in a younger teacher and she gave me the one piece of advice I still treasure.  She told me “not everyone will like what you write, so write what you like.  And if someone tells you that what you have created isn’t good enough, then you prove them wrong.”

I enjoy writing the protective broody hero.  I find these types of characters are fun to write, and an enjoyable character to create.  Helps too that they remind me of my wonderful husband.

I enjoy gardening with my hubby.  We have flowers, fruit trees and veg growing at any time of the year depending on our seasons.

My biggest adventure to date was a personal life change.  I was in an abusive relationship for quite some years and finally, about ten years ago, events escalated to my life being threatened physically with a sledge hammer.  Police were called and I was given about an hour to gather my then 4 children, and whatever belongings could fit in the car and escape.  What entailed were months of legal action and so on all to be told that other than a few court orders there was little could be done.

Whitsunday sands resort in Bowen, Australia.  When I married four years ago this is where our honeymoon was.  So beautiful and peaceful.

I’m not all that adventurous when it comes to food.

I’m a country girl so I’m loud haha.  Not sure how my kids and husband would describe me, though they often say I feed them all very well, and take great care of them.

Autumn – because here in North Queensland it’s about the only month that’s pleasant all day long.

Book two of the Sins of the Virtuous series, Indulgence & Temperance, is already contracted so just waiting for edits on that.  Currently finishing writing books three and four.  I’m hoping to make it seven books in total. So keeping very busy.

Favorite holiday: All of them!

Cat or dog: Geese (We have two) Each of her novels bring something symbolically Australian to her readers, from Aboriginal herbal remedies, to certain gemstones naturally only found in this part of the world.

Each of her books tell of a passionate connection between the hero and heroine, surrounded and threatened by deceit, scandal, theft and sometimes even murder.

These romances swerve from the traditional romances as Faye aims to give her readers so much more intrigue, whilst also revealing the hidden histories of rural townships of North Queensland.

Faye finds her inspiration from the histories of not only the township she grew up in, but the many surrounding it. She also bases most of her characters on people she has met in her life.

Faye was able to live her own passion driven romance, marrying the love of her life after a whirlwind romance in 2013. Together they are raising their 9 children in a remote country town in northern Queensland, Australia. Isabella Miley was trapped. Her brother and protector was dead – murdered on a slave traders ship. And now the man she feared most, Samuel Buchanan, had papers placing her in servitude to him. She needed to get the signet ring and ruby necklace she’d hidden away if she were to be able to prove who she was. When Samuel threatened to make her his wife and offer her out as payment to all the debt collectors that were calling, she ran for her life and straight into the arms of Ruben Stoneheart.  Before she could ask for his help she found herself dragged back to Samuel and into bondage.

Ruben wanted a peaceful life, far away from the blackbirding slave trade he had once been involved in. He had watched too many people die on those ships and all for a man’s own greed and want of a ruby necklace.

This wasn’t the life he wanted. He wanted peace. A wife. Family.

When the Irish beauty Isabella ran into his arms down on the docks, she stirred feelings in him unlike anything else. Never could he have imagined her to be as passionate as she was mysterious…

She pulled her hand away. “Why did you call me that?”

“I didn’t mean to overstep my place, but I had to say it,” he explained. Reaching to her, his fingers ran along the soft, pale skin of her cheek. “Bella means beauty, something you most definitely are.”

She lowered her face from his, but not before he saw the blush filling her cheeks again.

“I really must go,” she said, hesitantly leaning into him and kissing him on the cheek near his lips. “Thank you again, Ru,” she uttered softly before turning and stepping away from him.

She had just reached the door when she glanced back at him. “Bellymena.”

“What?” he asked, confused by what she had just said.

Watching her leave his office, Ruben knew he wanted more than anything to see this woman again. There was something about her that was so hypnotic.

Driven by the need to know she was now safe from the men chasing her, he followed her from his office and back into the alleys that led to town.

Losing sight of her momentarily, his steps quickened. Hearing a scream up ahead, he ran toward it. As he rounded the corner, he saw her being captured by two burly men; men he had seen act as deckhands on his father’s blackbirding ships.

“You’re a slippery little thing, aren’t you?” he heard a familiar voice say as a third man approached a very terrified-looking Bella.

His gaze going to the man who had spoken, his gut clenched.

Hiding in the shadows of the alley, Ruben watched as the old sailor walked toward her. He couldn’t believe the woman he had just been with was connected to the same man he was trying to prove a criminal. Samuel stopped in front of Isabella, his hands going to her chin, and Ruben found himself wondering exactly what kind of relationship lay between these two. As the older man’s lips connected to her, he couldn’t ignore her struggle to be free.

“I will never let you go,” Samuel said when his lips finally left hers. “Without your brother here to protect you, you are mine to do with as I please.”

Thinking now was the time he should again jump to this woman’s rescue, Ruben started to step around the corner toward those holding her captive. He’d only taken a few steps when a carriage pulled up and Samuel threw her inside before turning to his henchmen.

“Find Ruben and convince him to give me that ruby necklace. Now!” he ordered before instructing the driver to take off quickly.

Cursing himself a coward for not going to Bella’s rescue earlier, he kicked the earth beneath his feet. Everywhere he turned it seemed Samuel was there, his deception bleeding into every inch of his life.

Even Isabella. But how was she connected to this evil man?

One Response to Q&A with Faye Hall