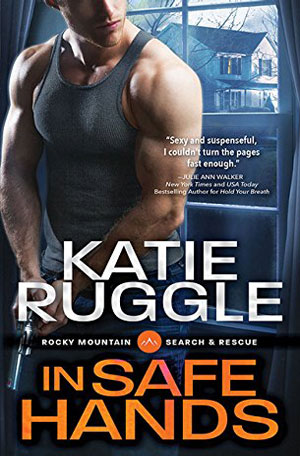 He was her hero,

But one wrong move ended their future before it could begin.

Now he’ll do whatever it takes to keep her safe,

Even if that means turning against one of his own.

As a member of the Field County Sheriff’s Department, Chris Jennings is used to having it rough. The Colorado Rockies aren’t for the weak-of-spirit, but he’s devoted his life to upholding the law—and to protecting the one woman he knows he can never have. He’ll do whatever it takes to keep her safe. Today we’re lucky to have Katie Ruggle here with us, author of the Colorado Search & Rescue series. Today marks the release of IN SAFE HANDS, the final installment in the amazing romantic suspense series. Thanks for being with us, Katie.

What’s the next release we have to look forward to from you?
In Safe Hands (available Oct 4th) is the thrilling finale of my Rocky Mountain Search and Rescue series, in which mysteries are solved and secrets are revealed. Daisy hasn’t left her house in years, and her only company besides her often-absent father is her friend (although she wishes he were more), Deputy Chris Jennings. One night, Daisy witnesses something from her bedroom window—something that puts her in terrible danger and transforms her home from a safe haven into a deadly trap.

Why search and rescue for your books? What made you think of that to set you romantic suspense series in?
I’ve worked with a lot of first responders, and I marvel at the courage it takes to run toward those gunshots or burning buildings or iced-over reservoirs, rather than away. It’s especially impressive in the remote mountains, where isolation and extreme weather and the treacherous landscape makes saving people a lot harder—and more dangerous. It seemed like a natural setting for romantic suspense; after all, tension and heroic tendencies are built into these first responders’ jobs.

Is romantic suspense your favorite genre of romance? If so, why? If not, what else do you like?
I love writing romantic suspense. The mystery ups the romantic tension, and everything seems more intense and thrilling. Thanks to my “Squirrel!” brain, however, I do enjoy reading all sorts of genres, including YA, paranormal, mystery, non-fiction, all types of romance, urban fantasy, and…well, pretty much anything.

Which was your favorite hero to write in the Rocky Mountain Search & Rescue series and why?
George is totally my favorite. Oddly enough, it’s because he made me work for it. Since he isn’t chatty, I had to show who he was using only his body language and actions and the occasional grunt. That was tricky, but I love George anyway.

What’s next for you, Katie? We can’t wait to read more!
My Rocky Mountain K-9 Unit series will be out in 2017. There are hot cops and heroic dogs and scary villains and explosions and women on the run… What more could anyone ask for?

Lightning Round
Tea or coffee: Tea, please! If I get even a tiny bit of caffeine, my heartbeat goes crazy, and I start talking really fast (faster than usual, even). Oh, sorry. This is supposed to be the lightning round, isn’t it? I’m not good at writing short. Obviously.

Vanilla or chocolate: Vanilla! Although I won’t turn down chocolate, if offered. I’m opportunistic that way.

Early bird or night owl: Both? Neither? I love sleeping in, but I’m most productive early in the day. Of course, since I work nights at a bakery, my whole sleep schedule is completely wacky.

Boxers or briefs (readers want to know!): Not to be contrary (kidding—I love being contrary), but boxer briefs, please.

Favorite holiday: Huh. I’ve never really considered it. I think my favorite is…Labor Day. After all, we get the day off of work, but there aren’t those stressful expectations that bog down holidays like Christmas and Valentine’s Day.

Favorite season: Fall! Even though I’m not taking classes right now, I still get that excited, buzzy feeling that something new is starting once the weather starts to cool down. Plus, it’s cold enough to kill most of the bugs, but it’s not so cold that my eyeballs freeze, so fall is the best time of year to be outside.

Cat or dog: What’s with the hard questions? I’m going to have to go with dogs. Even though I love my kitties, my dogs had me first.

Favorite color: Orange. Not bright, clown-and-traffic-cone orange, though, but a darker red-orange. He was her hero,

But one wrong move ended their future before it could begin.

Now he’ll do whatever it takes to keep her safe,

Even if that means turning against one of his own.

As a member of the Field County Sheriff’s Department, Chris Jennings is used to having it rough. The Colorado Rockies aren’t for the weak-of-spirit, but he’s devoted his life to upholding the law—and to protecting the one woman he knows he can never have. He’ll do whatever it takes to keep her safe.

Daisy Little has lived in agoraphobic terror for over eight years. Trapped within a prison of her own making, she watches time pass through her bedroom window. Daisy knows she’ll never be a part of the world…until the day she becomes the sole witness of a terrible crime that may finally tear the Search & Rescue brotherhood apart for good.

When she’s not writing, KATIE RUGGLE rides horses, shoots guns, and travels to warm places where she can SCUBA dive. Graduating from the Police Academy, Katie received her ice-rescue certification and can attest that the reservoirs in the Colorado Mountains really are that cold. While she still misses her off-the-grid, solar- and wind-powered house in the Rocky Mountains, she now lives in Rochester, Minnesota near her family.

One lucky winner will receive a copy of the first three books* in the series! HOLD YOUR BREATH, FAN THE FLAMES, and GONE TO DEEP. Simply comment here to enter to win. *Prizes mailed to U.S. and Canadian addresses only.

5 Responses to Q&A with Katie Ruggle: In Safe Hands & Giveaway