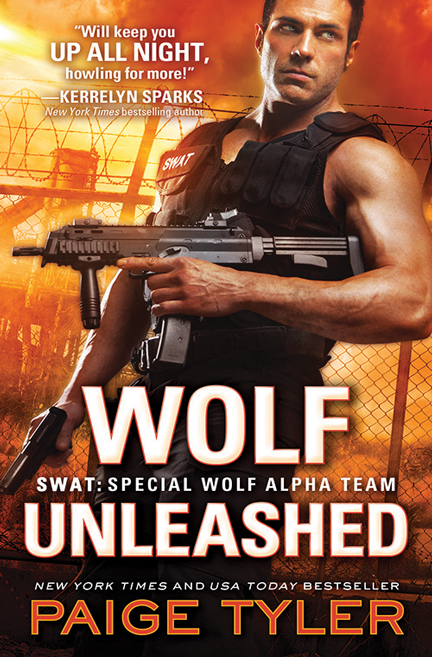 Lacey Barton can’t deny her crazy attraction to Alex Trevino, but that doesn’t mean she has time for the gorgeous SWAT officer. She’s hell-bent on discovering who’s behind the brutal dogfights sending countless mauled animals to her veterinarian office. The trail leads Lacey to a ring of vicious drug dealers and suddenly she’s in way over her head—right smack in the middle of a SWAT stakeout.

How do you keep your series straight?

Hubby. He maintains the series bibles, which includes spreadsheets with every character we’ve used in the story and their basic info (names, ages, appearance, special traits, jobs, relationships, etc.). We also maintain character profiles that have a lot of the same info, but also include pictures of the actor inspiration for each person, and events in their lives that shape them.

One of the most important part of our series bibles are the timelines. There are the top level timelines that show the relationship between each book (including all the various short stories I write for my webpage and newsletter), and then individual book timelines that cover every scene (time of day, day of the week, point of view, and major events taking place in that scene).

It’s crazy keeping all this stuff up and running, but it’s necessary to keep things straight. Does Book 4 of SWAT (To Love a Wolf) take place when Gage and Mac are getting married? How long has a character been in prison by the start of Book 2 of SWAT? How far along is a character in her pregnancy in Book 5 of X-OPS? We’d never get anything done without these kinds of details.

How many genres of romance do you write?

I used to write all over the place—erotic, sci-fi, time-travel, western, paranormal, suspense, contemporary, etc. But it was just stretching me too thin and I was losing control of my brand (my poor readers never had a clue what was coming out next). These days I try to curtail that. My X-OPS and SWAT Series still have a paranormal edge, but basically those two series, along with my SEALs of Coronado, and my Dallas Fire and Rescue are all focused on breathtaking action and suspense—with lots of romance, of course.

What is your favorite type of hero?

I typically only write blue collar alphas—military, cops, firefighters, covert agents (maybe a cowboy now and then). Guys in fancy suits just don’t work for me. Don’t get me wrong, I’m all for those kinds of books, but they’ve never sprung to my mind when I’m thinking of my heroes.

Of course, I also need a hero who is a relatable alpha. I can’t stand the archetypal arrogant alpha-hole. That’s likely because most of my books have strong heroine characters, and the hero is simply going to have to deal with that.

What makes Wolf Unleashed stand out?

Wolf Unleased is the story of how Alex Trevino, dog-loving werewolf from the Dallas PD SWAT team falls for dog-loving veterinarian Lacey Barton. There’s crazy mad chemistry between them from the beginning, but Lacey has some issues in her past that keep her from committing to any guy. She’s going to have to work through it in this story because Alex is frigging amazing!

There’s also nonstop excitement through this whole book that will keep you up all night. Seriously, you won’t be able to put this book down! There’s a deadly drug on the streets of Dallas, girls going missing from the local college, and a dog fighting ring all thrown into the mix! Oh yeah, and there’s also the minor issue of Alex trying to hide the fact that he, and every member of the Dallas SWAT team, are werewolves!

What are you working on now, and what’s next for you?

We’re working on the third book in my SEALs of Coronado Series—Texas SEAL. It releases in January, but is available for pre-order now. After that, we start the seventh book in my SWAT Series. There’s no title for that book yet, but it’s due to the publisher on the 15th of January, so we should get moving on it. In between those books, I’ll be doing the edits for Book 6 of SWAT and Book 7 of my X-OPS Series, which are already with my publisher.

Oh yeah, and just for fun, I’m working on a serialized New Adult Series (is that redundant?) with two other amazing authors—Mary Frame and Donna Michaels. It’s going to be a three book set that follows three sorority sisters through their adventures and romances at college. I’m really excited to be writing in something that has such a completely different style than I’m used to. SHE BRINGS OUT THE WOLF IN HIM

Lacey Barton can’t deny her crazy attraction to Alex Trevino, but that doesn’t mean she has time for the gorgeous SWAT officer. She’s hell-bent on discovering who’s behind the brutal dogfights sending countless mauled animals to her veterinarian office. The trail leads Lacey to a ring of vicious drug dealers and suddenly she’s in way over her head—right smack in the middle of a SWAT stakeout.

With Lacey in danger, Alex’s wolf side is unleashed. But when she witnesses Alex shift, she’s even more terrified… Now it’s up to Alex to crack the case—and earn back Lacey’s trust and, ultimately, her heart.