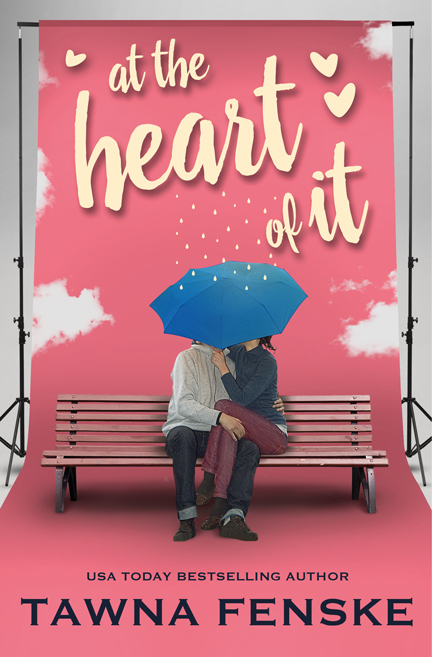 Q&A with Tawna Fenske, the author of AT THE HEART OF IT.

TV producer Kate Geary is in unscripted heaven. She’s piloting a reality series featuring her favorite self-help guru, Dr. Vivienne Brandt. The Dr. Viv—whose nuggets of wisdom helped Kate get through some of her toughest times. Thanks to Dr. Viv, Kate is almost on the verge of figuring everything out. That is, until Jonah Porter, the superhot book nerd Kate just spent an amazing date with, appears at the show’s first meeting…

Thanks so much for inviting me! My new romantic comedy is At the Heart of It. It’s the story of Kate, a talented producer who lands her dream gig running a reality TV show starring her self-help idol, Dr. Viv. But Kate gets a huge shock when super-hot book nerd, Jonah (a guy with whom Kate had one amazing date) arrives on set with ties to the storyline that end up making him a reluctant participant in the show. As the cameras start rolling, everyone has secrets to hide—especially the kind that can break hearts.

I’m not sure there was any real defining moment, but I’ve been writing for my supper for as long as I can remember. I started out in journalism, which is what earned me the scholarships that got me through college studying English Lit. I spent my post-college years writing for newspapers and eventually transitioning to an 18+ year career in marketing and PR, which I continue to do part-time even now. People ask why I don’t give up the day job and do the author gig full time, which makes me laugh. My day job involves taking journalists out snowshoeing, attending free concerts, and sampling everything from burgers to cocktails so I can write about who has the best in the city—would you give it up?!?

But day jobs aside, I started writing fiction in 2002 after my book club read a novel by an uber-famous romance author and I announced that if that crap could get published, so could I.

It…uh….turned out to be a lot harder than I thought it would. My first romantic comedy came out in 2011, and I’ve published more than 20 of them since then. I love this crazy profession, and I wouldn’t trade it for any other job in the world. Except maybe pirate. I’d like to be a pirate.

I’m constantly gathering little nuggets of writing advice like a rabid squirrel hoarding nuts. I actually don’t know who gets credit for the quote, “you can’t edit a blank page,” but it’s something I remind myself of constantly. Sometimes I write well. Sometimes I write sentences that sound like they were put together by a drunk gorilla using a banana as a pen. The trick is to just keep writing and give yourself the framework to go back and polish things to perfection.

I actually love heroes who are far from perfect, since the flawed ones are more interesting and complex (not to mention giving me something to work with in creating a character arc). But two things all my heroes have in common is intelligence and a good sense of humor. That, and big hands. I kinda have a thing for big hands (a trait my husband shares with all my heroes, along with the aforementioned humor and intelligence!) I was lucky enough to spend a lot of time traveling in my 20s and 30s, so I have a lot of globetrotting adventures under my belt. I’ve watched giant tortoises hump in Barbados, been robbed at gunpoint in Venezuela, snorkeled with enormous manta rays in Fiji, paddled through glowworm-filled caves in New Zealand, rode a camel into the Sahara at sunset in Morocco, hiked the Alps in Switzerland, swam with nurse sharks in Belize, climbed an ancient ruin in Mexico and slid down on my butt when my fear of heights got the best of me, and accidentally got a free sensuous massage in Germany from a guy named Fritz (it’s a long story).

Tenacious, awkward, and perpetually laughing. Coincidentally, those are the three traits that have given me a pretty good career writing romantic comedy. Title: At The Heart of It

TV producer Kate Geary is in unscripted heaven. She’s piloting a reality series featuring her favorite self-help guru, Dr. Vivienne Brandt. The Dr. Viv—whose nuggets of wisdom helped Kate get through some of her toughest times. Thanks to Dr. Viv, Kate is almost on the verge of figuring everything out. That is, until Jonah Porter, the superhot book nerd Kate just spent an amazing date with, appears at the show’s first meeting.

Jonah did not want to get reeled into a world filled with invasive crews, pushy network execs, and over-the-top drama, but a connection to the story leaves him no choice. Fortunately, Kate—hot, smart, and funny—helps make it bearable. Now they’re both on the verge of violating their contracts as they find themselves sneaking around off set. But the cameras have a way of finding out everyone’s secrets…especially the ones that can break hearts. Tawna Fenske is a romantic-comedy author who writes humorous fiction, risqué romance, and heartwarming love stories with quirky twists. Her offbeat brand of romance has been praised by Booklist as “a tame Carl Hiaasen on Cupid juice,” and her debut novel, Making Waves, was a nominee for RT Book Reviews’ contemporary romance of the year. She is a fourth-generation Oregonian who can peel a banana with her toes and loses an average of twenty pairs of eyeglasses per year. She lives in Bend, Oregon, with her husband, her stepkids, and a menagerie of ill-behaved pets.