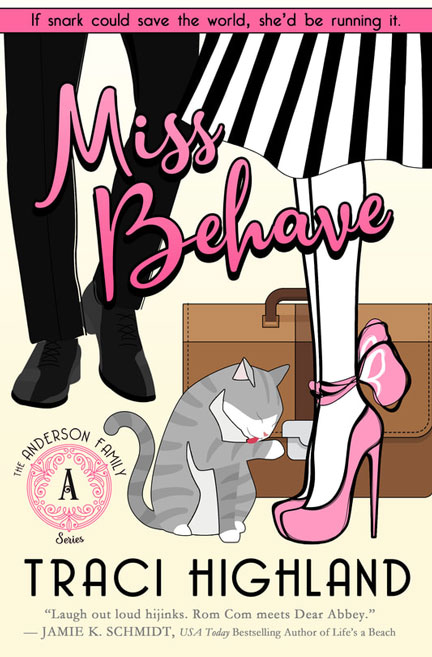 She’s great at giving advice, too bad she never takes it…

Piper Anderson wants to be a serious journalist at a serious paper covering serious news. Instead, she’s stuck at the Pendleton Falls Herald, where her massive investigative skills are wasted penning the paper’s advice column, Miss Behave.

Her shot at a meaty story comes when she’s assigned to write up a profile of a local business, Brookes Jewelers. She is determined to write the piece so she can use the article to impress a real paper…

Hi Traci! Your new romantic comedy, Miss Behave (The Anderson Family Series Book 1), sounds exciting! What was it while writing this book that set your fingers on fire?

Traci: Oh darling!  Romantic Comedy is absolutely my favorite as well!  I think the part of this book that really got my fingers flying has to be the Miss Behave columns.  I just adored Dear Abbey as a kid and wondered what would happen if her column was taken over by some snarky body-double that said horrible, terrible, no-good things in that column.

Can you tell us a little about your main character, Piper Anderson? She sounds like a fun character!

Traci: She is a rather delightful, if somewhat cheeky, young lady. She is a journalist that wants more than her small town assignment and her task as the local advice columnist, so she is desperately trying to write the worst advice column ever so that she gets taken off the assignment.  But in Piper’s world, things never go as planned.

What about the rest of the Anderson family to which you base your new series? Who are they?

Traci: It starts with Ann, Piper’s mother, who is a bit too proper for Piper’s tastes, and Piper’s Aunt Elise, a gun-toting, hard-stomping, wrestling obsessed family matriarch.  Then there are the four Anderson sisters, Mags, who has a terrible temper and somewhat unhealthy habit of speaking her mind, Betty, the beautiful, career-obsessed producer, and Stacy, the artist.

There is a love interest for Piper. Can you give us a little glimpse of who that might be?

Traci:  He is everything that Piper is not.  He is always put-together and a tad bit uptight.  Hating disorder, he and Piper are on something of a collision course.

Where does your book take place and why did you choose that location?

Traci:  It takes place in the fictional town of Pendelton Falls, CT.  Small, in the quiet corner of the state, the central focus of the town is on the lovely lake at the center and the charming local shops that attract weekending New Yorkers.

What was your hardest scene to write?

Traci:  The scene in the hotel at the end.  You will see!!

They say all books of fiction have at least one pivotal point where the reader just can’t put the book down. What is one of the pivotal points in your book?

Traci:  The scene with the scarf.  Scarves can cause a surprising amount of trouble, darling.

Have you started on book 2 yet?

Traci:  Book two, Mags’ book, is completely written and will be released very soon!  Here is a wee bit of a blurb:

Mags has gotten herself in a ton of trouble: she’s lost her job, any hope for references, and she’s going to run out of money…. fast.

Yeah, sure, it may be her fault for punching her boss, but the jerk totally had it coming.

Nobody listens to her until she reaches her boiling point, and by then, well, she’ll admit that there’s no stopping Mr. Fist To The Face.

Now her years of hard work as a speech therapist are about to go down the drain unless she can find some way to salvage her career.  So when her Aunt Elise calls to say that she has a job for her, it’s not like she can say no, even if the job is up in the wilds of Vermont.

Between stuffed moose, sloppy dogs and sexy men, Vermont proves to be a lot more interesting than she expected.  But when she uncovers a scheme that would put her new employers’ livelihood in jeopardy, more than just hydrangea bushes are about to get squashed.

What was your favorite chapter (or part) to write and why?

Is there a genre you haven’t written but would love to?

Traci:  I have not yet written a true cozy mystery, and I think I would enjoy it!

What’s next for you?

Traci:  Well, this interview wore me out, so I think a margarita is in order.  After that, I’m writing Betty’s book.  I’m having so much fun with this series and the Anderson girls!

I hope you enjoy the reads and thank you so much for having me on your site! She’s great at giving advice, too bad she never takes it…

Piper Anderson wants to be a serious journalist at a serious paper covering serious news. Instead, she’s stuck at the Pendleton Falls Herald, where her massive investigative skills are wasted penning the paper’s advice column, Miss Behave.

Her shot at a meaty story comes when she’s assigned to write up a profile of a local business, Brookes Jewelers. She is determined to write the piece so she can use the article to impress a real paper.

Unfortunately Hunter Brookes, co-owner of Brookes Jewelers and the Pendleton Falls Herald, is rather persistent, in his own hot little way, that the piece should be nothing more than a glorified sales pitch.

But when diamonds disappear, Piper may get the chance to do a real investigation, leading her to confront family secrets and worst of all, turn to her mother for help.

Piper soon realizes that there is more to Mr. Brookes than a tight ass and a ridiculous fascination with name tags. Together they deal with roasted pigs, crazy cat ladies, and gun-toting fashionistas.

In all the chaos, they just might find the one thing that neither one was looking for: true love.

Last weekend I was at the pool with the children, and there was a woman naked and walking around the locker room.

I hate to be prissy, but to be naked around young children like that just isn’t right.  She comes to the pool regularly and I am not the only one who has happened upon her strolling around the locker room without clothes.  Now I know there are showers and that people change in locker rooms, but showers should be taken while wearing bathing suits and there are private changing rooms that are clearly marked.

How can I convey to her the accepted rules of decency before any of our children become hopelessly corrupted?

-Agape at the AquaPark

Do please get over yourself. People shower naked.  If you choose not to, then I assume you probably smell and your skin is beset by odd rashes.

I suggest that you buy your kids an ice-cream and treat yourself to a margarita.  Life is short, darling. Lighten up.

Traci Highland writes funny books for sassy ladies.  She is a graduate of Bryn Mawr College and has a Master’s from Quinnipiac University.  She uses this education to write books, bake cakes, garden and make homemade jams.  Her children say she’s bossy, her husband says she’s high-maintenance, but the dog thinks she’s perfect. 2 Responses to Q&A with Traci Highland