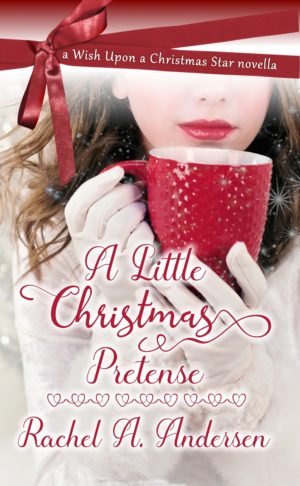 A Little Christmas Pretense by Rachel A. Andersen

When the staff at Fortescue Publishing learn that their long-time president will be retiring for medical reasons, Cindy Ashby sees only two paths ahead. One where Alastair Fortescue’s son of the same name comes in with no experience to direct the company she holds most dear. Another where Cindy’s calculating and manipulative superior, Margaret Stone, continues her pattern of self-service at the expense of all of her employees.

Enter Richard Prince, personal assistant to the younger Alastair Fortescue and Cindy’s counterpart, who honestly asks her opinion of his employer’s approach to finding the right solution. Together, they navigate the pitfalls of a blossoming office attraction and romance while searching for the perfect leadership recommendation before the Christmas deadline in three days.

Loosely based on the “Cinderella” fairy tale, this story will surprise and delight readers who love clean romantic holiday reads and Hallmark movies!

Cindy looked up from the well-worn pages of her childhood copy of Harry Potter and the Sorcerer’s Stone, surprised for a moment that someone had spoken to her. She blushed as a light-haired man with piercing sage green eyes looked down at her with an amused smile on his lips. The light behind him had changed significantly, indicating a brighter morning than she had seen when she’d last looked up from the book. She must have read several chapters already. She looked at the crumpled aluminum in her hand. Yes, she’d gotten lost in the book again.

She closed her book quickly as if she was trying to hide it from him. “It’s a family tradition. Harry Potter and Christmas. We read the books and watch the movies.” She shrugged. “Childish, right?”

Actually, it was a tradition she had started after her father’s death. He had read the books with Cindy when they’d first come out so it had seemed like a very appropriate homage to him when he died to read the books as a family and watch the movies. Cindy usually never got past the first book, but it was enough to wrap her in loving memories of her father.

He shook his head. “There’s never anything childish about a good book, no matter the genre,” he said with a smile. He gestured to her sign. “You’re looking for Alastair Fortescue III?” His gaze narrowed as if he was thinking critically about something. “Name’s a bit pretentious, don’t you think?”

She laughed. He’d just said the thing she’d been nervous to say out loud since Mr. Humphrey had revealed Alastair Fortescue’s son’s name. “A bit, I guess,” she admitted with a shrug as she marked her page and put the book in her oversized purse. “But then again, his grandfather started the publishing firm I work for, so I guess he’s rich enough that it doesn’t really matter. Maybe it even comes with the territory.”

The man in front of her grinned, and Cindy felt a rush of joy swell in her being. As dashing as he looked on his own, that smile was enough to knock her over without a second thought.

“Sounds like it.” He extended a hand as he reached across his body with the other to secure the strap of a messenger bag on his shoulder. “I’m Richard Prince. I’m the personal assistant to the pretentious inheritor you have on your sign.”

Rachel Andersen is currently an elementary school teacher in Southwest Kansas. She loves to write, and she enjoys putting the wonder of possibility in her students’ eyes when she tells them that she’s an author. Threads of family and faith are woven as deeply into her stories as they are into her personal life. She’s an impassioned advocate of self-compassion and empathy. She tends to write clean romances and story retellings set in her beloved, adopted “hometowns” of Kansas City, Missouri and Western Washington.