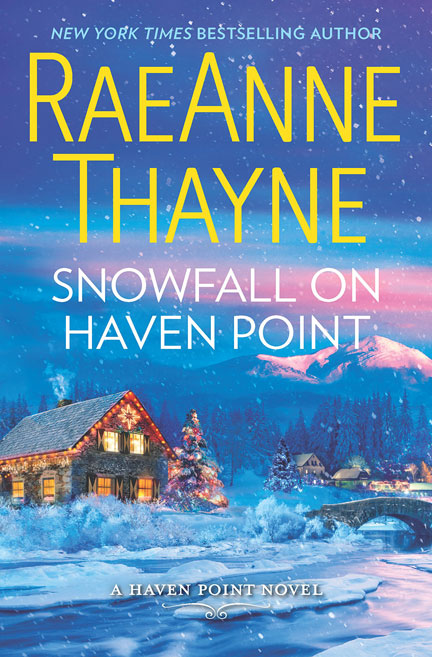 My latest release SNOWFALL ON HAVEN POINT features Andie Montgomery and Marshall Bailey, two characters who played big roles in the previous book RIVERBEND ROAD. Andie is a young widow trying to make a new start in Haven Point. Marshall, the sheriff of Lake Haven County, represents everything she tells herself she doesn’t want in a man – yet he just might be exactly what she needs.

Welcome to Romance Junkies, RaeAnne Thayne! As a longtime fan of your books, I’m thrilled to introduce you in this interview to our readers.

Thanks so much for having me!

First, can you tell us about your current release and any upcoming projects a Romance Junkie will be interested in?

My latest release SNOWFALL ON HAVEN POINT features Andie Montgomery and Marshall Bailey, two characters who played big roles in the previous book RIVERBEND ROAD. Andie is a young widow trying to make a new start in Haven Point. Marshall, the sheriff of Lake Haven County, represents everything she tells herself she doesn’t want in a man – yet he just might be exactly what she needs.

Marshall Bailey in SNOWFALL ON HAVEN POINT is a very realistic character. Can you tell us how you delved inside the sheriff’s head and made his personality so genuine as a law enforcement officer?

I love Marshall! He’s tough and rather surly at the beginning of the book, forced into a situation that makes him miserable. He hates being vulnerable and needy so when he’s injured in a hit-and-run accident just before Christmas, of course he would lash out and turn cranky. Despite his gruff exterior, he’s so ready to find someone to bring out all that soft tenderness inside.

My husband broke his leg two Christmases ago, which gave me a great wealth of information to draw on! While I was writing Marshall, I relied heavily on the experience of trying to caretake an independent man who hates being in that position.

Your heroine Andie Montgomery seemed to enjoy comforting Marshall with good food. Do you feel your own qualities as a mother and a wife influence your characters?

Absolutely. That nurturing instinct is intrinsically connected to everything I write. It’s such a huge part of my world that I honestly have no idea how to separate it from the characters and stories I write.

When you’re envisioning a series, do you plot it in advance or let the first book determine future books as you’re writing?

A little of both. Sometimes I have a very clear idea of where I’m going with a series but occasionally characters creep into other stories and then I realize I have to write their book. That was the case with Andie and Marshall. I knew as soon as I introduced Andie in RIVERBEND ROAD that I would eventually have to write her book to give her a happy ending, after everything she had been through. Marshall turned out to be the perfect hero for her!

How do your HOPE’S CROSSING and HAVEN POINT series differ? What can the fans of both series enjoy that’s similar?

Hope’s Crossing had some very specific issues – how do you create a sense of community in a tourist town that had previously struggled with but became prosperous almost overnight with a ski resort moved into town? I started Haven Point in the midst of the struggle – a town where the major employer had closed down and people struggled to find jobs and reasons to stay. Despite the problems, a dedicated group of women fought hard to preserve the sense of community and togetherness. I think what’s similar in both series is that sense of neighbors and friends caring for each other. It does go back to my core story, that we’re all here to take care of each other.

Do you see your husband’s qualities in your heroes? Does he see himself in them? Does anyone else influence your heroes?

My husband is endlessly supportive of me and is a fantastic father, which I think does filter through when I’m creating my heroes. I doubt he would see that in himself! Marshall especially reminds me of my husband, probably because the whole broken-leg-at-Christmas theme evolved from real life. I live in a community of (mostly!) good men who work hard to take care of their families and it’s only natural for my work to be influenced by good friends and neighbors.

Your books always touch deeply in the heart and soul of family life. Is there anything magical or ritualistic about your writing process that you feel brings out that emphasis?

Thank you so much for saying that! I wish I understood the magic that comes during the writing process. I only know it stems from sitting down day after day and trying to dig into my characters and the things that would (and should) matter to them. I struggle with every single book, thinking I have no idea what I’m doing or how the story is going to come together, but then somehow in the third or fourth draft, something clicks and I suddenly discover some key element or need or goal that brings everything else into sharp focus. Those serendipitous moments of storytelling are absolutely magical – but in my experience, they only come after lots of hard, intense work.

Now for an off-road adventure into what makes you tick… I enjoy your walking views on Facebook. What do you love most about walking outdoors?

Everything! The fresh air, the sunshine, the views. The steady physical activity is therapeutic, almost Zen-like, and somehow always gets my creative juices flowing.

As a mom, I’m sure you adhere to a strict schedule in order to get words on paper. What are your favorite interruptions?

A good book from one of my (many) favorite authors that I can’t wait to finish! That would probably top the list. I have some wonderful friends I like to meet for lunch once in awhile. Travel can be a big interruption, but usually also provides a way to refill the creative well, so it’s inevitably worthwhile.

If I gave you one wish to receive or do anything you’d like tomorrow, what would that be?

I would be hopping on an airplane, heading for a fun destination with my family. I love to travel and make those memories with my kids.

You’ve decided to throw a dinner party. What will you serve and will it be an intimate affair or a wild one that the neighbors will still be talking about next year?

We would probably have homemade pizza (my husband is obsessed with finding the perfect crust recipe!) and then do gourmet s’mores out on the patio around the gas firepit. And it would probably be memorable, full of funny stories and games and great times.

What animal best describes the personality of RaeAnne Thayne and why?

I would like to say a very warm, wise, mellow golden retriever … but it’s probably more like a chipmunk hopped up on sugar and soda. I don’t have a long attention span!

Thanks so much for visiting with us, RaeAnne!

Please tell our readers where they can connect with you online or in person.

You can find me at http://www.raeannethayne.com; on Facebook at http://www.fb.me/AuthorRaeAnneThayne ; on Twitter, @raeannethayne and Instagram raeannethayne. I’ll be attending the Utah RWA conference and Readers Luncheon on October 7-8 in Salt Lake City and a signing at Nora Roberts’ Turn the Page bookstore in Boonsboro, MD on Dec 3.