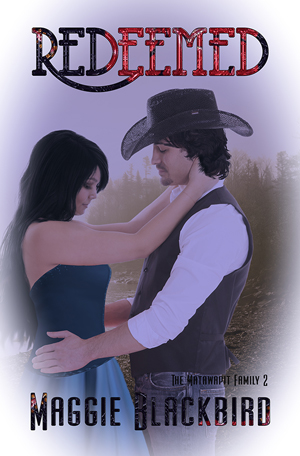 Bridget Matawapit is an Indigenous activist, daughter of a Catholic deacon, and foster mother to Kyle, the son of an Ojibway father—the ex-fiancé she kicked to the curb after he chose alcohol over her love. Adam Guimond is a recovering alcoholic and ex-gangbanger newly-paroled. He can’t escape the damage he caused so many others, but he longs to rise like a true warrior in the pursuit of forgiveness and a second chance. There’s nothing he isn’t willing to do to win back his son–and Bridget…

In the wilds of Northwestern Ontario, the adult children of a domineering Ojibway church deacon find their faiths crumbling and their beliefs faltering when a vengeful former lover, an ex-fiancé out on parole, and a seductive family enemy challenge Emery, Bridget, and Jude in a duel of love, loyalty, and values that threatens to destroy their perfect Catholic lives and family.

Each book can be read as a stand-alone or as part of the series.  You decide.

I’ve been asked a few times if I have total control over my works, or if the characters hijack the story.  I’d say it’s a give and take situation.  I always have an idea of what I want to write before I begin fast-drafting.  So I write the tagline and blurb first, knowing which direction the book is heading, and what the ending is going to be.  But during the writing process, I give the characters free reign.  I call it “me taking dictation for two headstrong people” LOL.

For REDEEMED, I completed Bridget (heroine) and Adam’s (hero) backstory, character backgrounds, and GMC (goal, motivation, conflict).  Then I let them off their lashes and they hauled me through their story.  I was typing rather fast to keep up with what they had to say.  They decide when they’ll have their first big “reconnecting” moment.  They decide if or when they’ll fall in love.  They decide how their romance will play out.  One thing they demanded was a HEA, not a HFN.

When the fast-draft is done, I’m in charge then, picking through their story with three rounds of self-edits.  Sometimes the characters ask me to add this or remove that—if something doesn’t seem right for them.  I do listen, because most of the time my characters aren’t wrong.  The very odd time they are wrong, I always consult a few trusted authors.

It’s a writing process that works for me.  It worked for BLESSED, book one in the MATAWAPIT FAMILY SERIES, and it’s working for SANCTFIED, book three in the series that I just handed over to my critique partner for a good critting.

Anyhoo, I’m pleased to introduce my latest novel to you…REDEEMED. A single woman battles to keep her foster child from his newly-paroled father—a dangerous man she used to love.

Bridget Matawapit is an Indigenous activist, daughter of a Catholic deacon, and foster mother to Kyle, the son of an Ojibway father—the ex-fiancé she kicked to the curb after he chose alcohol over her love. With Adam out on parole and back in Thunder Bay, she is determined to stop him from obtaining custody of Kyle.

Adam Guimond is a recovering alcoholic and ex-gangbanger newly-paroled. Through counselling, reconnecting with his Ojibway culture and twelve-step meetings while in prison, Adam now understands he’s worthy of the love that frightened him enough to pick up the bottle he’d previously corked. He can’t escape the damage he caused so many others, but he longs to rise like a true warrior in the pursuit of forgiveness and a second chance. There’s nothing he isn’t willing to do to win back his son–and Bridget.

When an old cell mate’s daughter dies under mysterious circumstances in foster care, Adam begs Bridget to help him uncover the truth. Bound to the plight of the Indigenous children in care, Bridget agrees. But putting herself in contact with Adam threatens to resurrect her long-buried feelings for him, and even worse, she risks losing care of Kyle, by falling for a man who might destroy her faith in love completely this time. About the Author:   An Ojibway from Northwestern Ontario, Maggie resides in the country with her husband and their fur babies, two beautiful Alaskan Malamutes.  When she’s not writing, she can be found pulling weeds in the flower beds, mowing the huge lawn, walking the Mals deep in the bush, teeing up a ball at the golf course, fishing in the boat for walleye, or sitting on the deck at her sister’s house, making more wonderful memories with the people she loves most.