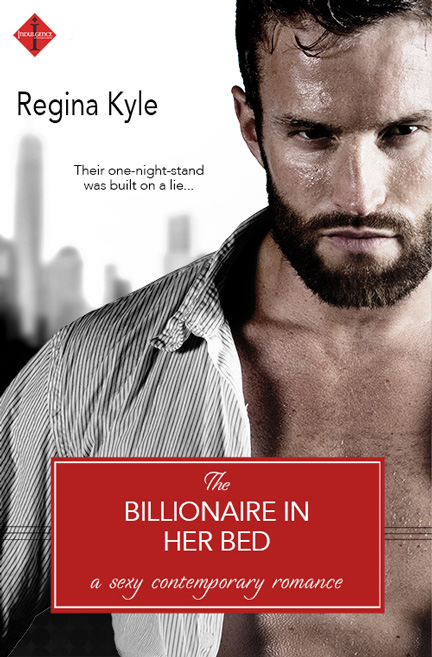 “Steamy with a side of sass—I loved The Billionaire In Her Bed!” – New York Times bestselling author Jennifer Probst

Billionaire In Her Bed, by Regina Kyle.

Real estate mogul Eli Ward needs to keep a low profile on his new project. He’s expecting a fight from the somewhat eclectic folks currently living there. What he doesn’t expect is for that fight to be led by Brooke Worthington, the woman who rocked his world one unforgettable night. The one woman who doesn’t know who he is, which is a good thing. She just sees him as a regular guy. It’s refreshing. Billionaire In Her Bed by Regina Kyle

Real estate mogul Eli Ward needs to keep a low profile on his new project. He’s expecting a fight from the somewhat eclectic folks currently living there. What he doesn’t expect is for that fight to be led by Brooke Worthington, the woman who rocked his world one unforgettable night. The one woman who doesn’t know who he is, which is a good thing. She just sees him as a regular guy. It’s refreshing.

Graphic designer and part-time bartender Brooke Worthington refuses to follow her family’s plan for her. She’s too busy building her artistic career. She doesn’t have time for relationships, either, especially with the super hot Eli, because she has to save the building she lives in with people she thinks of as her real family from some greedy real estate billionaire.

These two have secrets and chemistry that is nothing short of explosive.

Fate was a fickle bitch.

Why else would the woman who’d spent the last few days running naked through Eli’s mind be standing in front of him fully clothed now, presiding over a tenants’ meeting in the very building he planned to grab up and gut?

Said woman lowered her clipboard and pen. Her emerald eyes spat darts of green fire at him. “How did you get in here? And what do you want?”

“Door was open.” He held up a canary yellow flyer. “I found this by the mailboxes. Something about an association meeting.”

“I made that.” An older woman piped up from the sofa. “On the computer. My son-in-law taught me how to use Photostop.”

“I think you mean Photoshop.” A well-dressed man holding a plate of cheese and crackers corrected her.

“Read it again.” Brooke ignored them both, her eyes, still full of flames, never leaving Eli. “It says tenants’ association. As in people who live here.”

“Meet the new resident of 3-C.” He jingled a ring of keys. “Howdy, neighbor.”

“You know this place is for sale, right?” a stunning young African-American woman asked. “We could get booted out of here with barely any notice.”

Eli flashed what he hoped was a charm-their-pants-off smile. Brooke was clearly none too happy to see him. He couldn’t afford to have the rest of the tenants ganging up on him before he had a chance to get the lay of the land. “I like to live dangerously.”

And he couldn’t think of anything more dangerous than sharing a residence with the star of all his new favorite fantasies.

“What’s the matter?” Brooke set her clipboard and pen on an antique wooden drafting table. Was she an architect as well as a bartender? Or maybe an artist? With her boho chic vibe he could totally picture her standing before an easel, deep in concentration, a brush in her mouth and streaks of paint in her hair and on her cheeks. He imagined coming up behind her and turning her in his arms, removing the paintbrush from her between her ripe, rosy lips so he could…

His stomach lurched, and he tightened his grip on the strap of the duffel bag slung over his shoulder. Did she know who he was? Or why he was there? Was that why she was less than thrilled to see him? “What makes you think I’m a city boy?”

She rolled her eyes at him. “Have you looked in the mirror lately? You’re like a walking advertisement for Fifth Avenue.”

Shit. He did a mental tally of the contents of his duffel. Designer shirts. Custom-tailored pants. Cashmere sweaters. Hell, even his underwear had a designer label. He’d have to send Ginny on a shopping spree if he didn’t want to blow his cover. Where did regular guys buy clothes, anyway? Target? Wal-Mart? Paige and her postdoc pals swore by Goodwill. Not that his sister wanted for money. He made sure of that, had ever since their parents were killed in a car accident when he was finishing up at Wharton and she was still in high school. She said it was all about the thrill of the hunt, finding an elusive diamond among the cubic zirconia.

Struck by sudden inspiration, he flashed his charming smile again, this time directing its full wattage at Brooke. “You’d be surprised what you can find at Goodwill if you’re persistent enough.”

She studied him for a few seconds, then shrugged and popped a piece of cheese into her mouth. Eli relaxed his white-knuckle grip on the bag, and the knot in his stomach loosened, too. He’d dodged a bullet and managed to throw her off the track for the time being. But he’d have to be a damn sight more careful in the future if he wanted to stay on the down low. He made a mental note to text Ginny.

“I take it you two know each other, but the rest of us haven’t had the pleasure.” Cheese and crackers guy held out his free hand. Eli could have kissed him for changing the topic, if he didn’t think it would send the wrong message. “I’m Chris. Welcome to the neighborhood.”

“And I’m David.” A slightly shorter but equally good looking man came up beside Chris, slipping an arm around his waist. “Chris’s partner. We’re in 2-A.”

At least he could use his name without setting off any alarm bells. Real estate developers weren’t exactly rock stars.

“Thanks.” He took it and drank, more for the sake of being polite than being thirsty. Cheap beer, like cheap scotch, wasn’t exactly his drink of choice. But instead of being assaulted by stale, cardboard crap, his taste buds were awash with flavors. He took another sip, savoring this time instead of slugging. Smooth and heavy-bodied, with great coffee notes throughout and a hint of something else on the back end he couldn’t quite identify. “Not bad.”

“Vanilla coffee stout.” Vanilla. That was the mystery ingredient. David lifted his own cup. “From the brewery around the corner.”

A brewery. Eli added that nugget to his mental checklist of reasons to invest in Sunset Park.

Brooke cleared her throat for attention. “Okay, people. As exciting as our new addition is, we’re still in the middle of a meeting here.”

“We can deal with the garden later. I want to hear more about Eli.” An older woman eyed him appraisingly from the sofa. The gray-haired man next to her blew a loud raspberry, but she continued, undeterred. “I don’t see a ring on your finger. Tell me, young man, do you have a girlfriend?”

“Or a boyfriend?” asked David, the arm around Chris tightening.

“I’m straight,” Eli assured him, then directed his gaze at Brooke. “And single. Regina Kyle knew she was destined to be an author when she won a writing contest at age ten with a touching tale about a squirrel and a nut pie. By day, she writes dry legal briefs, representing the state in criminal appeals. At night, she writes steamy romance with heart and humor. Her book Triple Dare was a 2016 Booksellers’ Best award winner.
​
A lover of all things theatrical, Regina lives on the Connecticut coast with her husband, teenage daughter and two melodramatic cats. When she’s not writing, she’s most likely singing, reading, cooking or watching bad reality television. She’s a member of Romance Writers of America and of her local RWA chapter.

3 Responses to Regina Kyle’s BILLIONAIRE IN HER BED Spotlight