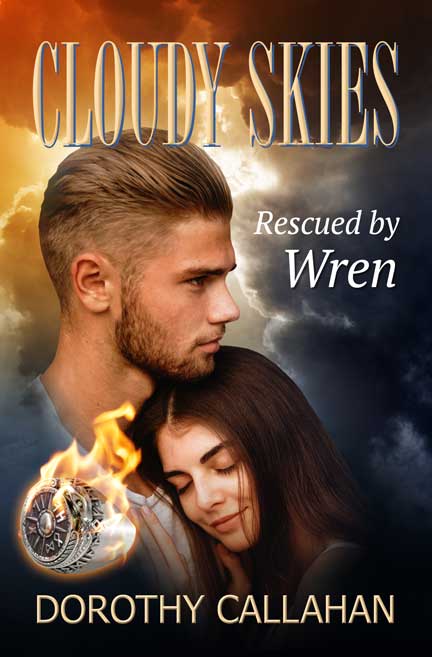 Writing a series, especially a six-book series, was an undertaking I never thought I’d attempt. When I had the idea for my CLOUDY SKIES series, though, I knew I had to write it. These six siblings had a very strange upbringing, and I was curious to see how it would affect them as adults. I wrote the prelude as a permafree ebook to introduce the children, and each full-length novel starts a decade later. These young adults are now ready (or not) to fall in love.

Book 3 is available starting June 2, and it’s Wren’s turn to deal with his trust issues. And Emma? Well, Emma’s a hot mess. Here’s the down-low… In one family, generation after generation relied on the magic of one Norse ring to lead them to their destined match. For those who heed its advice, only joy and health follow. But the ring has also been known to foreshadow impending doom. Ignore its truth at your peril….

Growing up on a farm has instilled a life-long love of animals, and Wren Werner has carried this love with him into adulthood. He spent every penny of his inheritance retrofitting his rural childhood home into a shelter for unwanted pets, and he’s happy to care for them until they find their fur-ever home. His respect for life and nature was something his father instilled in him young, and he’s happy to carry on that legacy, despite being inundated with more and more homeless animals and limited resources to help get them adopted.

Now, though, his biggest problem is an old, vitriolic woman who keeps calling him, demanding Wren return the ten-thousand-dollar check she accidentally sent him.

He would, had he not spent it rescuing more animals.

Worse, his family’s magical ring keeps signaling him that this woman is his future!

The only good thing about this ring is that his kneejerk reaction to it usually has him bumping into a certain grieving young woman he’d love to get to know better, but she seems to slip in and out of his life before he can get her name, let alone her phone number. He’s never felt so inadequate when it comes to helping people before, and he really wants to help her. If only he knew how to reach her!

Emma McWilliams is emotionally and spiritually lost. Her entire world revolved around her husband, Bill, but he died from a fluke accident involving a stray dog a mere two years into their marriage. After his death, Emma watched her entire early adulthood disappear. What was she to do with their big empty house, her unused college degree, and a world of pain? Honestly, her husband didn’t leave her in the best position to move on, or even cope. The house they’d bought is burying her. Since it’s not market-ready, she can’t sell it, and without that money, her college dreams of starting her own company are moot. No way is she going to her rich grandmother for help, either; that woman is convinced that Emma’s as worthless as her parents. Emma is trying to accept this new normal, but every time she turns around, another problem surfaces.

The only highlight of her life is that one man keeps appearing just before her world turns dark, cheering her up with a kind word or sweet gesture.

But every time she tries to get his name to thank him, he disappears.

Emma’s heart hammered away faster and faster. Geez, at this rate, she’d break into a sweat simply staring at Wren as he stood there on her front stoop.

Man, if Bill were alive, he would be miffed.

Perhaps her best friend, Sarah, sensed Emma’s issue, or maybe she simply needed help upstairs moving all the furniture, but the inner door swooshed open and there she was.      “Everything okay?”

Sarah looked back and forth between them. “You know him?”

Not as well as she wanted to, but Emma nodded.

A suspicious smile curled Sarah’s lips. “Just curious: are you the guy from the restaurant last week?”

Now Wren’s smile grew into the most brilliant thing she’d ever seen, and he knew, darn it, that she’d been talking about him. “We did share a booth, yes. Emma told you about that?”

Emma relaxed. Sarah had this under control.

“I’ve been trying to reach Emma all week.”

“Well, you found her, but we’ve got a lot of work to do, so, unless you’re here to help move furniture….?”

They both snapped their eyes to him. Emma came to her senses first. “What?”

“I can help you move things.”

Despite telling her eyes to behave, Emma’s gaze traveled up and down Wren’s frame. He was tall and lanky, not unlike Bill, and Bill had been pretty strong from working out. “You don’t have to do—”

“The entire bedroom.” Sarah looked at Emma while she said this.

No, Emma wasn’t remotely ready to have another man in her house, let alone her bedroom. “We’re fine. Really. We got this.”

But Wren looked at Sarah, not her, almost in challenge. “I can help. Really.”

Sarah’s tone and manner turned coy, and Emma’s mouth dropped open as she purred to Wren. “Are you strong?”

He looked at Emma like he needed to prove himself. “I grew up on a farm. There’s not much I can’t lift or move. That includes animals and machinery. I think I can handle a few pieces of furniture.”

“He’s got my vote.” Sarah started to swing the storm door open for him, but Emma blocked the way.

He stood before her and tipped her chin up to meet his eyes. “Something inside you did, too.”

Hot tears slipped from her eyes. Her mouth scrunched as she tried to keep her emotions from tumbling out.

“I get it, Angel. I know what it’s like to lose someone you love. The world keeps turning, and even though your feet are on the ground, it feels like everything around you is spinning out of control.”

That was exactly it. She nodded, and then nodded some more. She felt rooted to the spot, and though her feet couldn’t move, everything around her spun out of reach and out of focus. She’d be mortified to have this secret crush of hers in her ramshackle house, absolutely mortified. But his sweet and honest expression and desire to help was so foreign after the last few years of struggling alone that the mere thought of being cared for brought waves of panic and paradoxically, relief.

He still stared, patient and waiting for her answer. Her eyes widened as her pulse raced. “I shouldn’t. It’s not—”

His hand flung up with an interrupting sound to halt her refusal. “It’s an honest offer, Emma. Now, are you going to let me in, or am I going to have to beg your friend here to get you to accept my offer?”

“I’m Sarah.” She rammed her hand out the door, physically shoving the storm door into Emma’s backside hard enough to hurl her into Wren’s chest.

Wren rescued her with a hand on her lower back, smiling once to her as he pulled her snug to his side, and then broader still as he reached out and shook Sarah’s hand. “I’m Wren.”

It was the first time Emma had been up close and personal with a man’s chest since Bill died. That brought her lifetime tally to a whopping two. And Wren wasn’t releasing her. With her one palm on his pectoral and the other on his waist, Emma found herself suspended in time. His polo had three white buttons on it, with the tiniest smudge near a buttonhole. The swell of his chest was tangible if not visible under his clothing. And his scent… oh, Lordy, his scent. He smelled like soap and horses and something earthy and minty, not toothpaste, but more like wild spearmint. Her fingers had spanned to brace her fall, and now she curled them, capturing a bit of his shirt in the process.

Her eyes raised up to Wren’s like she’d downed half a bottle of bourbon, liming him with sunlight and making him all blurry and dreamy around the edges. Perhaps he knew where her thoughts were, or perhaps he felt the same way, because he continued to smile down at her for what she thought might have been hours. About the Author:  Dorothy Callahan is one of those authors who annoys other authors by refusing to be tied down to one genre. If a tale demands to be told—even if she’s never read a single story like it—she’ll find a way to write the book of her heart. This is the only way to quiet those demanding characters begging to be heard.

She lives in New York with her wonderful husband, a pride of demanding cats, and two sweet dogs, most of them rescued from shelters (well, not her husband; he didn’t need rescuing). Her love of both animals and writing prompted her to start READ AND RESCUE, an organization where animal-loving authors and readers can find one another. The unique aspect to this group is that each author pledges a portion of proceeds to his/her favorite animal cause.