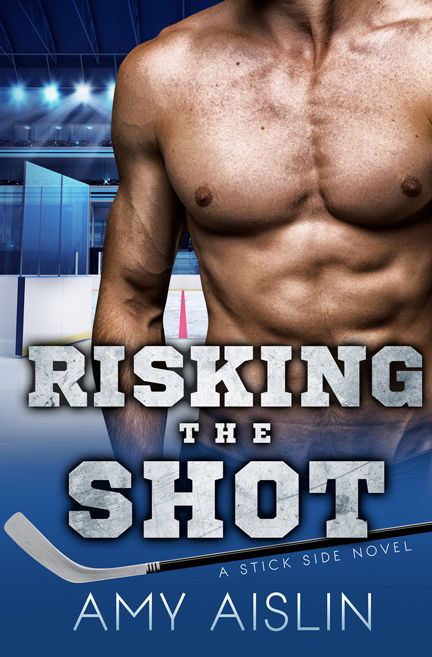 Thank you for joining me to celebrate the release of my newest m/m romance, Risking the Shot, the fourth book in my Stick Side series. If you like hockey romances, be sure to check it out. Risking the Shot has an age gap romance, a single dad, and a hockey player falling for a cake decorator.

Romance Junkies has allowed me to briefly take over the blog today, and I’m sharing an exclusive excerpt. Check it out below!

A chance at making the playoffs? It’s a dream for NHL forward Taylor Cunningham that just might come true. If he can keep his eyes on the ball—ahem, puck. And study for midterms. Dakota Cotton, eleven years his senior, isn’t just a distraction, though—he’s everything Tay’s ever wanted.

Dakota has no interest in introducing someone who might not stick around to his four-year-old son. Been there, done that, with the divorce to prove it. But there’s something about Tay that hits all of the right buttons and has him wanting to take a chance.

As things heat up between them, and the pressure to succeed hits an all-time high, will they risk a shot at happiness or choke?

In the foyer, Tay dressed in his outerwear while Dakota propped himself against the wall.

“What are you going to do now?” Tay asked. “Get some work done?”

It was barely six. Not having to drop Andy off at preschool meant that he didn’t need to leave for the office for another two hours. Two and a half if he really pushed it. One if he wanted to hit the gym before work.

“I don’t judge.” Finished lacing up his boots, Tay planted a small kiss on Dakota’s lips. “I take naps all the time before a game.”

“Yeah, but you probably also spend the entire morning at practice or working out.” Winding his arms around Tay, Dakota nipped his nose. “All we did was have sex.”

“Oh, all we did.” Tay’s teasing eye roll was massive. “Should we perform an acrobatic routine next time?”

“Hm.” Dakota’s blood heated, and he let it, despite knowing he was teasing them both unnecessarily. But it was oh so fun. “I bet you’re plenty flexible.”

Tay’s voice dropped to a rough whisper. “Oh, you have no idea how bendy I can get.”

When Tay’s mouth met his, it was slightly minty from the glob of Dakota’s toothpaste he’d run over his teeth with his finger. Tay’s hands ran over his bare chest, and Dakota shivered, wanting more and more and more, wanting Tay writhing beneath him again, knowing it couldn’t happen. At least, not right now.

With a groan that vibrated into Dakota’s chest, Tay wrenched his mouth away. He was back a second later for one, two, three quick kisses.

Chuckling, Dakota pushed him toward the door. “Go.”

“I’m going, I’m going.” Tay pulled the door open. “Tell Andy I said hi,” he said over his shoulder. “And that I’ll come make that castle with him soon.”

“He’ll love that,” Dakota said, all casual-like, as though Tay’s words didn’t make him ache with too many feelings he hadn’t felt in a long, long time.

Tay was gone with one last flash of a smile, closing the door behind him.

God. Sinking against the wall, Dakota ran his hands over his face. From casual dinners to first date to sex in only two weeks. It wasn’t fast, not really, but given Dakota hadn’t dated since Fiona, it felt like warp speed.

And a part of him couldn’t bring himself to care.

Amy’s lived with her head in the clouds since she first picked up a book as a child, and being fluent in two languages means she’s read a lot of books! She first picked up a pen on a rainy day in fourth grade when her class had to stay inside for recess. Tales of treasure hunts with her classmates eventually morphed into love stories between men, and she’s been writing ever since. She writes evenings and weekends—or whenever she isn’t at her full-time day job saving the planet at Canada’s largest environmental non-profit.

An unapologetic introvert, Amy reads too much and socializes too little, with no regrets. She loves connecting with readers. Join her Facebook Group, Amy Aislin’s Readers, to stay up-to-date on upcoming releases and for access to early teasers, find her on Instagram and Twitter, or sign up for her newsletter.

Win one of two signed paperback copies of Risking the Shot, plus author swag. 18 to enter and win; open internationally.