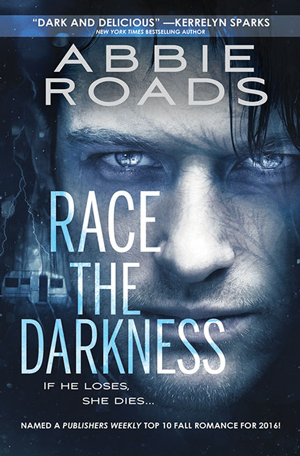 Today is our first book club! We’re very excited at RJ to feature Abbie Roads’s RACE THE DARKNESS. The book received a 4.5 heart rating from our reviewer. According to SJ, “Dark romantic suspense mixed with the paranormal make for a book you can’t put down. It’s a fascinating read that explores the depths of the human will.”  You can read the entire review here. Now is your chance to learn more about Abbie and the book in a series of videos.

Sourcebooks generously donated copies of Abbie Roads’s RACE THE DARKNESS to ten lucky readers. Our readers came up with questions for Abbie, and you can learn more about the book directly from her! IF HE LOSES, SHE DIES
Her voice haunts his thoughts; her whispers fill his days
But when he discovers the woman of his dreams is real
He’ll race the clock to save her before she’s lost to him forever

Scarred by lightning, burdened with a power that gives him no peace, criminal investigator Xander Stone struggles to maintain his sanity against the voice that haunts him day and night―the voice of a woman begging him to save her.

Isleen Walker has long since given up hope of escape from the nightmare of captivity and torture that is draining her life, her mind, and her soul. Except…there is the man in her feverish dreams, a strangely beautiful man who beckons her to freedom. And when he comes, if he comes, it will take all their combined fury and faith to overcome a madman bent on fulfilling a deadly prophecy.

Now hear what Abbie has to say about her book.

And more from Abbie:

If you have any other questions, post them here and Abbie will answer them. To learn more about Abbie, check out her website at http://abbieroads.com or click below.