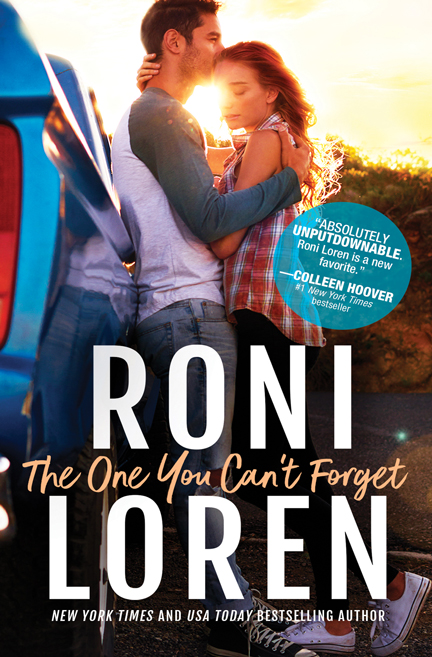 “Absolutely unputdownable, delivers all of the feels! Roni Loren is a new favorite. Loved this.”

The world admires her as a survivor. But that impression would crumble if people knew her secret. She didn’t deserve to be the one who got away. But nothing can change the past, so she’s thrown herself into her work. She can’t dwell if she never slows down.

Wes Garrett is trying to get back on his feet after losing his dream restaurant, his money, and half his damn mind in a vicious divorce. But when he intervenes in a mugging and saves Rebecca—the attorney who helped his ex ruin him—his simple life gets complicated… The world admires her as a survivor. But that impression would crumble if people knew her secret. She didn’t deserve to be the one who got away. But nothing can change the past, so she’s thrown herself into her work. She can’t dwell if she never slows down.

Wes Garrett is trying to get back on his feet after losing his dream restaurant, his money, and half his damn mind in a vicious divorce. But when he intervenes in a mugging and saves Rebecca—the attorney who helped his ex ruin him—his simple life gets complicated…

Their attraction is inconvenient and neither wants more than a fling. But when Rebecca’s secret is put at risk, both discover they could lose everything, including what they never realized they needed: each other

She laughed and kissed him. This morning she’d melted down. But somehow this man had her laughing and turned on only a few hours later. Everything inside her felt buoyed.

Wes parked the van in front of the house and cut the engine. “Well, I’ll take it as a good sign that your car is still here. If those guys showed up with your keys, they would’ve taken your ride.”

Rebecca frowned. “No. I didn’t have my car keys with me since I walked today, but at least everything looks the same as how I left it. Plus, my car keys are hanging on a peg in the kitchen. They wouldn’t be hard to find.”

Wesley eyed her. Her voice was confident, but she kept smoothing the leg of her scrubs, her hands like nervous birds not knowing where to settle. He had the weirdest urge to hug her and tell her it was going to be all right, to take that fear from her. But a sure way to freak her out even further would be for some strange dude she’d just met to hug her. He was freaked out enough for both of them that he even had that urge. “Hey, why don’t you tell me where your spare key is hidden, and I’ll go in and check the house for you first.”

There. That was a reasonable, not weird way to help.

She glanced his way, frowning. “If the alarm’s on, I need to turn it off, and I don’t want to sit out here. That’ll stress me out more than going in with you. I’m the only one who will be able to tell if anything’s been moved anyway.”

“Fair enough. Whatever makes you feel most comfortable is fine. But the minute something seems off or out of place, we bail and call the cops. Pinch my arm or something to signal me.”

Her frown deepened, a little line appearing between her brows, as if she couldn’t quite figure him out.

He couldn’t stop his smile. “What’s wrong? You look like you’re trying to figure out a really hard math problem.”

“I wouldn’t make this face for math. I’m good at math.” She let out a breath. “I guess I’m just trying to figure out why you’re being so nice to me. You don’t…know me.”

“Does that matter? If I knew you, would I not want to help you out?”

He tilted his head. “I mean, are you secretly some evil comic-book villain who’s about to take over the city? Or do you have plans to kill me and store my body in your basement when we get inside?”

Her pinched expression flattened into something droll. “Austin houses don’t have basements.”

She snorted and then covered her nose and mouth like she was surprised the sound had escaped. “You’re kind of strange, Wesley Garrett.”

He shrugged. “I get that a lot.” And that was a helluva lot better than what most people probably called him these days. “Now, are we going to bravely search your house like two TV detectives? Because I am so down for that right now. I need to bang open doors and yell, ‘Clear!’”

She laughed, the soft, husky sound filling the space between them and sending a pleasant ripple through him. The feeling was so unfamiliar that it stalled his breath for a second. How long had it been since he’d been around someone he could simply joke with and relax around? Someone who wasn’t looking at him like he was damaged goods? Or who wasn’t checking him for signs of a backslide?

He didn’t get clean-slate conversations like this anymore. Not with his family. Not with friends. Not even with himself. Rebecca felt like a gulp of clean, fresh air. He wanted to close his eyes and inhale. In this moment, he could be a man with no past. He could be whoever he wanted to be. And right now, he wanted to be the guy who was making this woman laugh.

She cocked her head. “You say that like you’ve been planning to do this TV detective routine for a while.”

“It’s a life goal,” he said solemnly. “I mean, I’ve done it at home alone, but that really isn’t as fun. Plus, it pisses off the neighbors. All those banging doors.”

She laughed again, and he felt like he’d won some kind of prize. She seemed like someone who didn’t give those laughs away easily.

“Now all we need are weapons,” he declared.

She reached into the bag of takeout and pulled out the eco-friendly cornstarch forks Dev used in place of plastic cutlery. “How’s this?”

“Perfect. We can go for the eyes.” He took his fork and grabbed the keys. “Let’s do this.”

“I’m ready.” Some of their playing around must’ve distracted her from her nerves because when Rebecca got out of the van, her shoulders seemed looser and there was a tentative smile on her face. She nodded toward the house and set her fork on the hood. He followed suit, since if he really had to take action, he’d need his hands free. “My extra key is by the back door.”

They headed around the house and into the small backyard. She hunched near an overgrown herb garden and fished around, finally coming up with one of those fake rocks. She flipped it over and keyed in a three-digit code on a spinner combination lock.

Wes snapped a leaf off one of her plants and inhaled the scent. “Mmm, lemon thyme. You’ve got quite a collection out here. Cilantro. Oregano. Italian parsley. I’m a little jealous.”

She glanced over her shoulder at him. “I honestly have no idea what most of them are or what to do with all of them. I had the house landscaped when I moved in, and I guess the gardeners picked the perfect spot because they grow like crazy. Except the basil, which was the one I actually knew how to use. That one was a goner during the first hundred-degree day of summer.”

“Basil is a sensitive soul.” It was on the tip of his tongue to tell her he could show her how to use the herbs, but he held the offer back. His brother had been right. Making her laugh was like some weird sort of drug to his starved system, but she didn’t need a guy flirting with her right now. It couldn’t go anywhere anyway. He didn’t date, for one. And even if he was doing the casual hookup thing these days, she didn’t strike him as the type who’d be down for that, especially with someone like him. He had nothing to offer her besides garden-care tips.