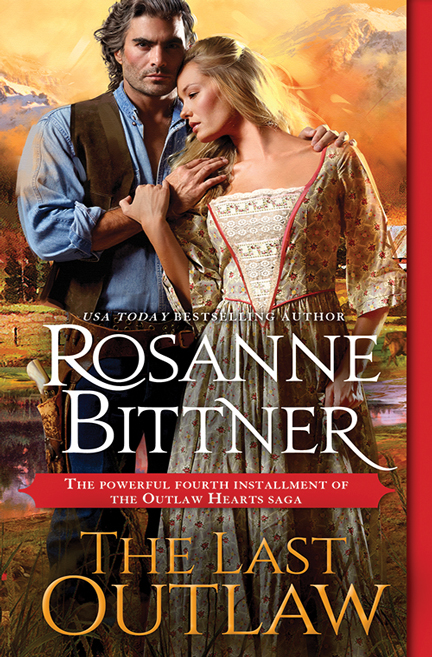 Times have changed, and the old Wild West is a thing of the past. Nestled in his beautiful Colorado ranch, surrounded by family, infamous former outlaw Jake Harkner’s hung up his guns for good and finally found a measure of peace—but dark memories haunt the woman who has always been his strength, and not even Jake is certain he can save his beloved Miranda this time. Times have changed, and the old Wild West is a thing of the past. Nestled in his beautiful Colorado ranch, surrounded by family, infamous former outlaw Jake Harkner’s hung up his guns for good and finally found a measure of peace—but dark memories haunt the woman who has always been his strength, and not even Jake is certain he can save his beloved Miranda this time.

All he can do is swear to remain by her side. But it takes more than a hope for peace to outrun a past defined by violence, and it isn’t long before Jake is embroiled in a rescue mission he simply can’t refuse. Life has brought him back full circle as he rides into Mexico to save a young girl from a dreadful fate…leaving Miranda behind one final time, fearing that the man she loves more than anything is destined to die the way he’s always lived—by the gun.

Rosanne: THE LAST OUTLAW opens with a love scene between the hero (Jake Harkner, a notorious gunman) and his wife Miranda (Randy).  Because of a prologue to this first chapter, readers will know a gang of bank robbers is headed for Boulder, Colorado, which is where Jake and Randy are on a shopping trip and staying in a hotel. They will know Jake is bound to get involved in the gunplay that follows.

In this opening, readers realize these two, whose love story is incredibly beautiful, are having personal problems stemming from an event in Book #3, LOVE’S SWEET REVENGE.  You will have to read that book to learn what happened, but I think here you will sense the incredibly loving relationship these two share, Jake’s adoration of his long-suffering wife, and you will realize something needs to happen later in this story to “fix” the current underlying problems they are having.  I think readers will be surprised later in the story to find out how this problem is solved.  It’s VERY sexy, and also very beautiful.

Jake trailed his tongue over his wife’s skin, trying to ignore his fear that she could be dying. Her belly was too caved-in, her hip bones too prominent.

She’ll get better, he told himself. The taste of her most secret place lingered on his lips as he moved to her breasts, still surprisingly full, considering, but not with the same breasts he’d always loved and teased her about, with the enticing cleavage that stirred his desire for her.

He would always desire her.  This was his Randy.  She was his breath.  Her spirit ran in his veins, and she was his reason for being.  God knew his worthless hide had no business even still being on this earth.

He ran a hand over her ribs, which were too damn easy to count.  Sometimes he thought he’d go mad with the memory of last winter, the reason she’d become more withdrawn and had nearly stopped eating.

He met her mouth, and she responded.  Thank God she still wanted this, but something was missing, and he couldn’t put his finger on it. He thought he’d made it all better, thought he’d taken away the ugly.  He’d feared at first she might blame him for what happened, but it had been quite the opposite.  She’d become almost too clingy, constantly asking if he loved her, not to let go of her, asking him not to go far away.

He pushed himself inside of her, wanting nothing more than to please her, to find a way to break down the invisible wall he felt between them, to erase the past and assure her he was right here, that he still loved her.  How in hell could he not love this woman, the one who’d loved him when he was anything but loveable…all those years ago?  She’d put up with his past and his bouts of insanity and all the trouble and heartache he’d put her through…this woman who’d given him a son and daughter who couldn’t make a man prouder and who loved him beyond what he was worth … six grandchildren who climbed all over him full of such innocent love for a man who’d robbed and killed, and worst of all … killed his own father.

He moved his hands under her bottom, pushing himself deep inside her, relishing the way she returned his deep kisses and pressed her fingers into his upper arms in an almost desperate neediness.

That was what bothered him.  This had always been good between them, a true mating of souls, teasing remarks back and forth as they made love. But now it was as though she feared losing him if she didn’t make love often, and that wasn’t the sort of man he was. It had always been pure pleasure between them. He’d taught her things she would never have thought of, helped her relax and release every sexual inhibition. He knew every inch of her body intimately, and she’d loved it.

This was different.  And it was harder now, because not only did he hate the idea of feeing like he was forcing her, but he was also terrified he would break something.  She was so thin and small now.  He out-weighed her by a good hundred and fifty pounds by now; she couldn’t have weighed more than eighty or ninety pounds.

He surged deep in a desperate attempt to convince himself he wasn’t losing her. And through it all, he was screaming inside.  Sometimes he wanted to shake her and make her tell him what else he could do to bring back the woman he’d known and loved for nearly thirty-two years. He missed that feisty, bossy woman, the only person on this earth who could bring him to his knees.

He’d faced the worst of men as a lawman in Oklahoma, and run with the worst of men the first thirty years of his life.  He’d spent four years in prison under horrible conditions.  He’d been in too many gunfights to count, taken enough bullets that he had no right still being alive.  He’d ridden the Outlaw Trail and defied the odds. His reputation followed him everywhere, and a reporter had even written a book about him – Jake Harkner: The Legend and the Myth.  Myth was more like it.  And the legend wasn’t one he was proud of.

And this woman beneath him … this woman he poured his life into this very moment … she’d been there for most of it.

He relaxed and moved to her side.

ABOUT THE AUTHOR:  A native of Michigan, USA TODAY bestseller and award-winning novelist ROSANNE BITTNER is known as the “Queen of Western Historical Romance” for her epic love stories and family sagas. Her well-researched books span 1800’s America from coast to coast.  The descriptive words used most often by Rosanne’s devoted readers are “awesome,” “realistic,” and “unforgettable!”

Enjoy this epic romance from the very beginning! Enter to win a copy of Outlaw Hearts by Rosanne Bittner