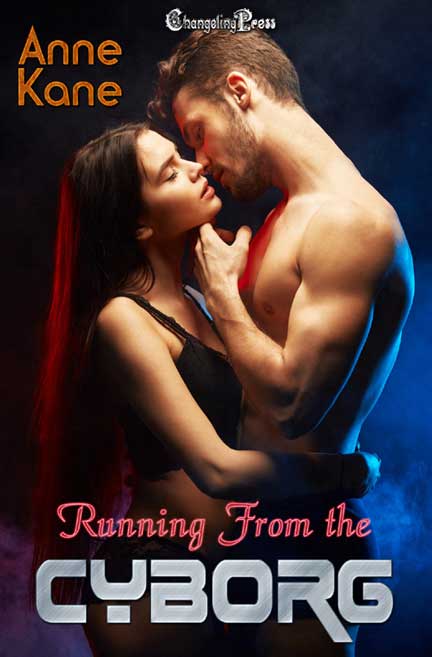 In Anne Kane’s RUNNING FROM THE CYBORG, she can run but she can’t hide from the sexy cyborg who has her in his sights.

Caitlyn: Gorgeous. Feisty. Human. A survivor in an unforgiving galaxy. Running from an enemy she can’t see for reasons she doesn’t understand. Whoever he is, he’s trying to kill her.

Jakob: Large. Mouthwateringly sexy. Loyal. Cyborg. Determined to find the female who seduced him, gave him a night he’d never forget, then disappeared before he woke… Running from the Cyborg

She can run but she can’t hide from the sexy cyborg who has her in his sights.

Caitlyn: Gorgeous. Feisty. Human. A survivor in an unforgiving galaxy. Running from an enemy she can’t see for reasons she doesn’t understand. Whoever he is, he’s trying to kill her.

Jakob: Large. Mouthwateringly sexy. Loyal. Cyborg. Determined to find the female who seduced him, gave him a night he’d never forget, then disappeared before he woke. When he finally manages to catch up to her, he intends to do whatever it takes to keep her at his side.

Jakob stalked his prey like a feral Mars-cat on the prowl for its next meal. Finally, after an entire sun cycle, he had her in his sights. He was halfway across the concourse when her head jerked up and turned in his direction. He felt a familiar tightening in his groin at the flare of recognition in her eyes.

Damn. Why did the sight of her still make his body go hard with wanting? She’d left him twice now , both times immediately after the most amazing sex he’d ever had. Twice, without even bothering to say goodbye. The last time, she’d even gone to the trouble of slipping him something to make sure he slept through her treachery.

So why couldn’t he just leave her alone?

He was cyborg, trained to fight, to detect weakness and treachery. And yet  he’d repeatedly managed to trick him and disappear. He wasn’t about to let it happen again.

The first time, she’d left him in her quarters, and explaining that one to the station master hadn’t been easy.  Well yeah, the human female was here but she kind of disappeared while I was napping. Nope. It sounded lame even to him, and he was the one doing the explaining.

Then, for some insane reason he still couldn’t fathom, he’d let his guard down when he’d caught up with her on the space station. Like a love-struck human idiot.

She was just so damned, irresistibly sexy that he’d had to have her right then and there. And it had been great. Amazing, really. Absolutely the best he’d ever had.

Until he’d drifted off to la-la land on whatever it was she’d drugged him with. He still couldn’t figure out how she’d managed to drug him, but she had.

Yeah. By the time he’d come to, she was long gone. Probably halfway across the galaxy, and the barkeep who rented those rooms out by the hour hadn’t looked all that surprised.

He’d bet his next month’s salary she’d pulled that one before. To add insult to injury, she’d stuck him with the room tab. By the looks of the tally, she’d stocked up on supplies at his expense.

He tried to tell himself she didn’t mean anything to him. A human female? Not likely but he didn’t appreciate being made to look like a fool. At the very least, she owed him an explanation and he intended to get it from her.

He refused to acknowledge the tiny part of his brain that said he wanted a lot more from the sexy human, with the unruly cloud of dark curls and hauntingly beautiful brown eyes, than an explanation.

When he’d first set out to track her down, he’d discovered just how little he knew about the female that he couldn’t seem to get out of his head. Luckily her image had been stored in his brain, and he’d been able to retrieve her likeness. No one at the station’s bar where they’d hooked up the first time, or the tavern where he’d made love to her after catching up with her, would admit to having any idea where she might have gone, or anything else about her.

It was as if she were a ghost. A very sexy, very elusive ghost.

The shadow of fear he’d detected in her eyes at their first meeting had haunted him ever since. Whether he intended to admit it or not, Caitlyn mattered to him. He needed to find her and assure her safety so that he could get her out of his head and get rid of this state of semi-arousal that haunted him every time he thought of her.

Like a lot of things in this fractured universe though, the theory was a whole lot simpler than the reality. The woman was damn good at hiding her tracks. Brilliant, in fact. Finding her was proving to be both difficult and time consuming. Anne Kane lives in the beautiful Okanagan Valley with a bouncy little rescue dog who’s breed defies description, a cantankerous Himalayan cat, and too many fish to count. She spent many years trying to fit in and act normal, but finally gave up the effort. She started writing romance in 2008, and her fate was sealed when she won a publishing contract with Red Sage Publishing and just a month later Changeling Press accepted her first submission. Since then she had published more than thirty stories in a variety of sub-genres, all with a happily ever after.

Her hobbies, when she’s not playing with the characters in her head, include kayaking, hiking, swimming, playing guitar, singing and of course, reading.

You can find Anne around the web at: