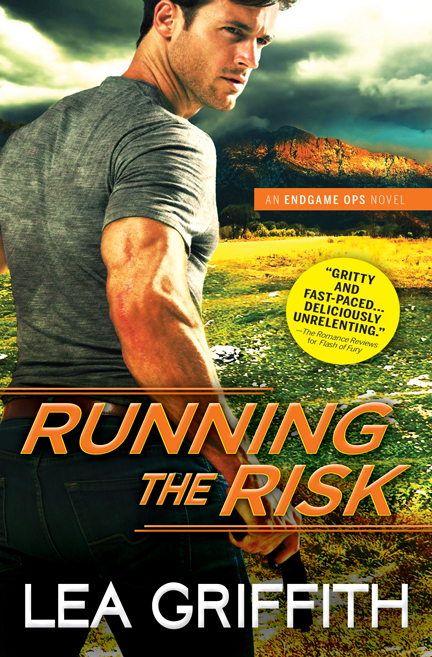 RUNNING THE RISK by Lea Griffith Jude wasn’t the only one who lost something on the day Ella was presumed dead. She sacrificed Endgame Ops, the love of her life, and parts of herself she can never get back. Now she’s determined to take down the world’s most dangerous terrorist—even if it means working for him.

When Jude and Ella are reunited, they’ll battle the lies Ella has been forced to tell…and struggle to save a love that knows no bounds.

When her man slept, he slept like the dead. She smiled ruefully. Not that they’d ever done much sleeping. A sharp pang hit her heart. He wasn’t hers anymore, was he? She drew in a deep breath, hoping to find the calm center that had served her so well the last year. Now wasn’t the time to deal with what she’d left behind. She had to keep him safe in the here and now so she could hopefully explain everything to him when the time was right.

She’d taken down the remaining four attackers and then the Piper had helped her relocate Jude to another safe house on the outskirts of Sarajevo. This one belonged to longtime Endgame associate, Adam Babic.

Ella had to make sure Jude was okay before she took off. Adam would handle Jude’s safety until he woke. The Piper was doing his best to find out who had sent the two teams of killers after her. Ella thought it could be any number of people though she ruled out Segorski pretty quick. He wanted her alive and it was clear by the shock and awe method of attack that they’d been there to eliminate their target, not capture.

An insidious thought crept in. Maybe they hadn’t come for her at all. Maybe the two teams of assassins had followed the Piper. Ella acknowledged the chill bumps breaking out on her skin. Fear was a fine emotion. It kept you sharp. But Ella hadn’t been born to this life like Jude had. She’d been molded and the fear was her friend and foe. She had to work to overcome it.

If they’d followed the Piper that meant someone was on to him. He had suspected for a while that someone higher up even than he in the Presidential administration had been gunning for him. They’d started by trying to take out Endgame. It wasn’t common knowledge that Noah Caine, aka, the Piper, had created a private spec ops entity, but it wasn’t exactly buried six feet deep either. On paper, they provided logistical support and security for private contractors rebuilding countries like Afghanistan and Iraq. It was unspoken but understood that they delved into the gray whenever they needed to. Whose feet had the Piper stepped on? Or was it just Dresden?

Ella needed to have a little sit-down with the Piper. It really was time he came clean on some things.

There was also the fact that if they hadn’t been after the Piper, they’d been after her. If that was the case, she needed to find out who it was and fast.

She rested her head on the bed beside Jude’s arm. She was so damn tired.

“He’s got to stop.” One of the men who’d cost her damn near everything had entered the room. Ella sighed soundlessly.

“He’ll never stop. I told you this and you said you could handle him, keep him busy on missions that wouldn’t get him killed and keep him far away from Dresden,” she reminded the Piper. She stopped for a moment and really looked at him. Maybe she’d get to ask him one day why they called him Piper. “You look really tired, old man.”

He snorted before rubbing his eyes. “I am old. Too old for this shit.”

Ella shrugged. “You set the board and now moves are being made. This was what it was all about,” she bit out.

Piper nodded. “I did my best but the bastard just keeps coming, doesn’t he?” There was a rueful note in his voice as he disregarded her comment.

She raised her head and stared at Jude. His eyes remained closed but she felt his attention. He was awake. Ella stood then and moved away from the bed. Jude’s eyes opened immediately, the black of his gaze snaring her, refusing to let her leave completely.

Always it was Jude. In every dream, in every breath, it was always Jude.

She watched him, noticing the exact instant he realized he was strapped to the bed. He tugged on each arm once and relaxed. Or at least he appeared to relax. With Jude that was never a true reality. He was at all times ready for anything.

“Take them off,” he demanded in a deep voice. His gaze never left hers.

She opened her mouth—to say what she didn’t know—but the Piper beat her to it. “No.”

Jude continued to stare at Ella. “Take them off or when I get free I’ll make you both pay.”

There was so much in his gaze. Questions, pain, rage—it was a tangle of emotion that traveled the air between them. And Ella was in no position to give him the answers or assurances he needed from her. Had needed for over a year now.

“I don’t deal with traitors,” he bit out.

Oh, that hurt. Cut bone deep and left her bleeding inside.

“No one has asked you to, son,” the Piper said, his voice now low and carrying a hint of frustration. “Then again, no one here is a traitor.”

The skin over Jude’s cheekbones went ruddy. Ella had really only seen them do that when he buried inside her so it was unique that she was seeing it now, and for an entirely different emotion. He was furious. Unfortunately, there was nothing she could do about that.

Jude’s gaze finally shifted to the creator of Endgame Ops. “Take off the restraints.”

The Piper shook his head and stopped beside the bed. “No. There is work to be done and while I would love nothing more than to release you, we appear to have different objectives. Ella Banning has a mission to complete, and you, Keeper, have to return to your team. If I let you out of the restraints, you’ll take her and I know what you’re apparently blind to—she’ll go with you, willingly, if it means you stay safe. And it will destroy any chance we have of finding out who is pulling Horace Dresden’s strings.”

Jude sat abruptly, reclining one second, upright the next. The chains attached to the leather cuffs on his arms and legs jangled against the metal framework of the bed he was on. The sound was strident and Ella winced. The Piper shifted to his right. Her back snapped straight and she reached for the weapon in her side holster, snapping the strap holding it in place.

Jude’s head rotated and once again she was pinned under his night-sky gaze. “You gonna shoot me, Ella-Bella?”

Her breath left her in a rush. He doubted her and it—hurt. She would never shoot Jude. But she’d earned his doubt and would have to carry it with her when she left. The Piper’s head swiveled in her direction and his pupils dilated. He lowered the hand that had been reaching for his weapon and took a small step back from Jude.

“I wouldn’t shoot him,” the Piper said wearily.

“I wouldn’t let you,” she responded, making sure her voice didn’t waver but conveyed her intent.