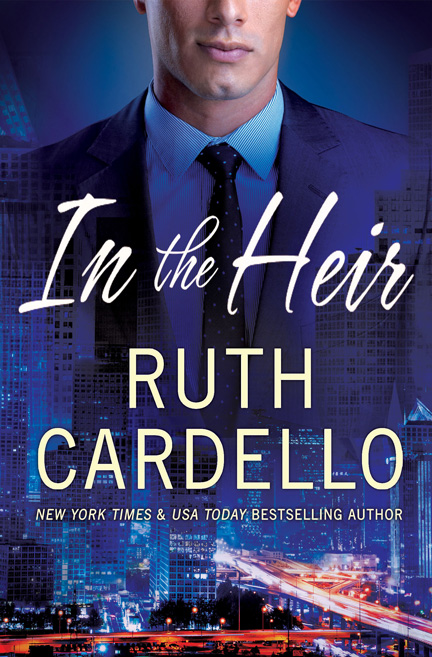 IN THE HEIR by Ruth Cardello. Brett Westerly is his father’s golden child, but it’s come at a cost. As head of the family corporation, he throws himself into his work—hiding in his office is easier than confronting the reality of his broken family.

After a bitter divorce that split the family and divided loyalties, the wealthy Westerly matriarch offers an early inheritance to any grandchild who marries and invites the entire family to the wedding.

The Westerly Billionaire Series is a brand new billionaire family set in the same billionaire world as my Legacy Collection, The Andrades, and The Barringtons. These are sexy, funny romances about hot alpha heroes and the strong women who tame them. Readers call my romances addictive like potato chips. You can’t stop at one.

I was born with the love of writing. As far back as kindergarten, I was creating worlds with characters I considered friends.

Before I was published an author in a writer’s group I was in told me to write what I love to read. I’ve lived by that mantra since.

My idea of the “perfect” hero is one who has a good heart regardless of how he appears on the outside. He is naturally a protector. He may be flawed, but the right woman can reach beyond his anger or pain and bring out the softer side of him.

I have a small farm, so my hobbies revolve around the animals we have. Lately it’s horses and chicken.

Parenthood. There is no greater challenge and nothing I consider more important.

I would describe myself as a quirky, driven woman who is constantly battling to balance family life with work. My friends would hopefully describe me as that and add that I’m loyal and supportive as well.

I just finished book 2 in the Westerly Series. Happy sigh, Spencer. He was so much fun to write. After book 1, he was not very happy with Brett. . .lol Title: In the Heir

Brett Westerly is his father’s golden child, but it’s come at a cost. As head of the family corporation, he throws himself into his work—hiding in his office is easier than confronting the reality of his broken family.

After a bitter divorce that split the family and divided loyalties, the wealthy Westerly matriarch offers an early inheritance to any grandchild who marries and invites the entire family to the wedding. Brett’s brother Spencer rashly gets engaged, and Brett knows it’s his duty to intervene. But he never imagined the unwelcome desire Spencer’s fiery fiancée would spark in him. Now the man who’s used to getting everything he could want has met the one woman he can’t have.

Ever since she was a girl, Alisha Coventry considered Spencer and his sister Rachelle the family she didn’t have. When Spencer asks for her help, Alisha has no problem becoming his fake fiancée—until she meets Spencer’s sexy older brother Brett. The chemistry between them is undeniable—forbidden—but as their relationship deepens, Brett is determined to have her.

Alisha only wanted to help the family make amends. Now she’s falling for the wrong Westerly. Ruth Cardello was born the youngest of eleven children in a small city in northern Rhode Island. She lived in Boston, Paris, Orlando, and New York before coming full circle and moving back to Rhode Island, where she lives with her husband and three children. Before turning her attention to writing, Ruth was an educator for twenty years, eleven of which she spent as a kindergarten teacher. She is the author of seven previous novels including Bedding the Billionaire, which was a New York Times and USA Today bestseller.