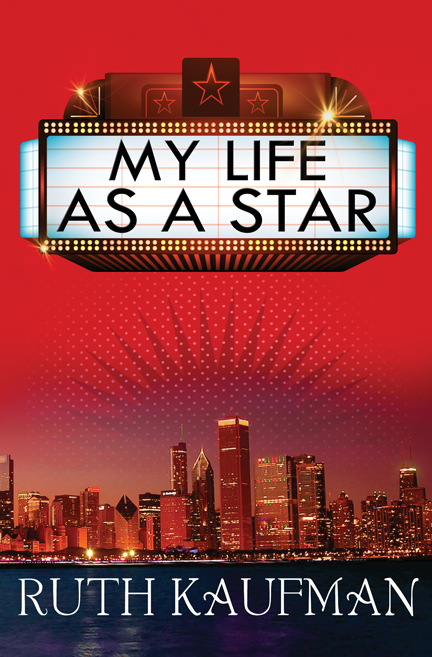 In MY LIFE AS A STAR by award-winning author Ruth Kaufman, after summoning the courage to quit her day job, Marla Goldberg is determined to achieve her dream of being a full-time working actress in Chicago. Her best gig so far is a national TV commercial directed by hot, famous Scott Sampson. But portraying a tap dancing zucchini isn’t acting or success to her disapproving, high-achieving family. Maybe they’ll be impressed if she gets her first role in a major film, also directed by Scott? How does she stop caring what they, and others, think? In MY LIFE AS A STAR by award-winning author Ruth Kaufman, after summoning the courage to quit her day job, Marla Goldberg is determined to achieve her dream of being a full-time working actress in Chicago. Her best gig so far is a national TV commercial directed by hot, famous Scott Sampson. But portraying a tap dancing zucchini isn’t acting or success to her disapproving, high-achieving family. Maybe they’ll be impressed if she gets her first role in a major film, also directed by Scott? How does she stop caring what they, and others, think?

Scott, aka Great Scott, finds himself falling for quirky, smart Marla despite his vow to never date another actress. The pressures of their profession, the glaring, ever-present public eye and fallout from online gossip threaten to tear them apart as she learns be careful what you wish for when her career and feelings for him suddenly skyrocket.

The sacrifices I make for my art.

I’m encased in a suffocating, ankle-length costume. My face, the only part of me you can see except for my feet in sparkly green tap shoes, is painted dark green. Perspiration slithers down my body, adding miserable fodder to the worst yet most potentially promising job I’ve ever had.

I am a tap dancing zucchini. But a zucchini filming her first national TV commercial!

The other produce performing for the American Farmers’ Market Association (a carrot, ear of corn and an ever-so-fat, shedding lettuce) and I aren’t laboring in the cool seclusion of an air-conditioned production studio. No, we’re exposed in all our vegetous glory in the middle of Michigan Avenue on a hot and humid late August afternoon. The crew converted one of the cement planters, usually bursting with flowers and tall grasses this time of year, into a tappable surface. The cameras are on the street, which is temporarily closed to traffic.

A sizeable crowd has gathered, as it does wherever there’s filming in this city. People swarm in front the Tribune Tower on one side and the Wrigley Building on the other.

Several former WZRJ-FM co-workers are laughing so hard they may expire. My sister Linda, flawless in her this-week-blondish hair and upscale worker bee ensemble of a cream sheath dress and high heels, shakes her head. I don’t know why I told them about this gig. I’d never tell my parents about any performance. They’d only say something like, “Are you still doing that? Get another job and do real work.”

Perhaps it’s for the best my brother Larry and his wife Monica aren’t here. They’re as always one thousand percent engaged in the care of PG (Perfect Grandchild), aka Zachary, and their newbie, PG2, aka Chloe.

Hold while carrot cavorts, two-three-four. Abundant greens on Carrot’s head flounce and cover his orange face. He sneezes, but doesn’t miss a step. Kudos to Carrot.

What I wouldn’t give for a towel to mop up some of my sweat. Or a tall glass of iced tea.

“Cut. Cut! Take it from before the time step. Carrot, keep that stuff out of your face.” This from the assistant director.

Our director, Scott Sampson, hasn’t yet deigned to speak to us. Trade publications have dubbed him Great Scott, and repeatedly rank him in the top ten list of living film directors. Several millennials wear Great Scott merch and carry signs saying, “We ♥ Scott!!” and “Great Scott RULES.”

He’s why I’m here. Usually I’m an aspiring actress, not a dancing gourd. When my agent Audrey called to say he was directing the AFMA commercial (though I’m not sure why a director of his caliber would) and next a feature film here in Chicago, I couldn’t wait for the opportunity to audition. I’d hoped he’d see the video, or that I’d get a callback and maybe have the chance to meet him.

The miracle of booking the spot upped my chances to impress him. Provided an “in” to get my first speaking part in a major motion picture after toiling as a paid extra on more than fifty, and doing small roles in indie features that went nowhere…for free. Not even mileage or lunch.

But how can you impress anyone dressed as a zucchini? What if he pigeon holes me as a tapping cucurbita pepo? What if he can’t see beyond the green?

“Rolling!” someone on the crew calls.

I resume time-stepping with a sigh. How can you want something, need it, and hate it at the same time?

Rarely is anything as good as I imagine it’ll be. I’d envisioned hanging around the set, sans unsightly costume, sweat and green face, attractive in my clingy black tank top and stomach-containing stretch capris, curly dark red hair miraculously frizz-free, carefully manicured toes peeping out of adorable kitten heel sandals. But GS didn’t show up while I sipped bottled water a production assistant gave me. He didn’t even show up for rehearsal.

Flap, flap, flap ball change. They’re piping in a sickly-sweet chorus singing the AFMA theme song to the tune of “A tisket, a tasket.”

Thankfully the music covers most of the crowd’s catcalls.

I’m so hot. So sticky. Every muscle aches from hours of hauling around this zucchini and the stiff movements it forces me to make.

I’m tapping too close to the rotund, papier-mâché Lettuce, who’s flap-ball-changing too slowly. His feathery layers flick me in the face. I feel a sneeze coming on.

“Lettuce, hurry up!” I hiss, still smiling for the camera.

A drop of sweat dangles from my nose, á la Roseanne Roseannadanna. It itches. But I can’t scratch. Or stop, either. I careen into Lettuce. Carrot crashes into me. A loud noise fills the air as Lettuce cracks.

We all fall down.

My head hits the ground, but my thick costume cushions the blow. I’ve fallen and I can’t get up. Miles of clear blue sky soar above me, but the sauna-like costume makes me claustrophobic. Out, let me out! My arms and legs flail helplessly.

“Cut! What is wrong with you people?” screams the AD.

The music screeches to a stop. Waves of laughter assault me, the kind you hear in those bad dreams where you show up to an important meeting in your underwear (not even your nice underwear, at that) and the conference room is full of executives in designer suits, sleek haircuts and chignons who guffaw and point at you.

“A little help over here,” a woman yells. Three standalone novels comprise Ruth Kaufman’s Wars of the Roses Brides trilogy, which reached #1 historical romance on Amazon in the US, Canada and Australia: AT HIS COMMAND, FOLLOW YOUR HEART and THE BRIDE TOURNAMENT.

Her new romantic comedy is MY LIFE AS A STAR. The standalone prequel, MY LIFE AS AN EXTRA, in which EAT, PRAY, LOVE meets LA LA LAND in Chicago, received an Honorable Mention in The Tracking Board’s 2017 Launch Pad Manuscript Competition. Other accolades include 2016 Booksellers’ Best Award double winner (Best Historical and Best First Book) and Romance Writers of America® Golden Heart® winner.

Ruth is also an on-camera and voiceover talent with a J.D. and a Master’s in Radio/TV who loves peanut butter and chocolate milkshakes and going to the theatre. Credits include independent feature films, short films, web series, national TV commercials and hundreds of voiceovers including e-learning courses, medical narration and commercials. She presents workshops for authors and actors and is a comedic storyteller.

#GIVEAWAY: If you’d like to a chance to win an audiobook code for MY LIFE AS AN EXTRA, comment below and let me know: What makes you LOL? I’ll choose a winner at 5PM Central June 30.