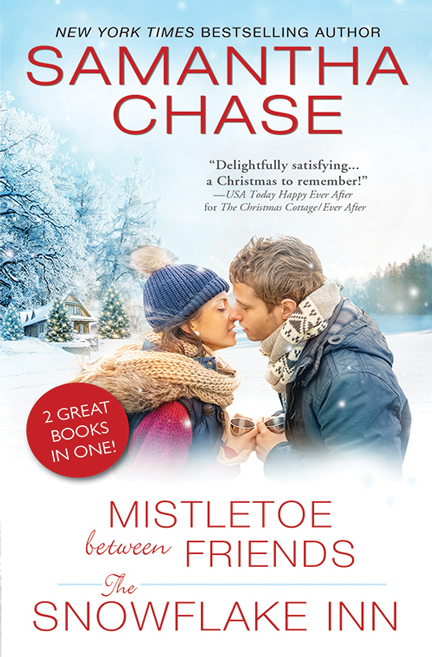 Two gorgeous stories about the most romantic time of the year…

New York Times and USA Today Bestseller Samantha Chase released her debut novel, Jordan’s Return, in November 2011. Teaching creative writing to students from elementary through high school motivated Samantha to take that step as well. Since then, she has become a NYT and USA today bestselling author. She lives with her husband of 24 years and their two sons in North Carolina.

Excerpt from Mistletoe Between Friends

Monday morning came way too soon for Lily. She’d given herself multiple pep talks and reminded herself how important it was to do the right thing for Cam.

It just sucked that the right thing for Cam was going to be torture for her.

Ever on time, Cameron arrived to pick Lily up at exactly 7:00 a.m. Knowing he was a stickler about time, she’d made sure that she was ready and waiting for him. But she could tell by the look on his face when she opened the door that he was surprised she was ready.

Cam looked her up and down and then at the suitcase beside her. “You’re ready,” he said with just a hint of disbelief.

A shy smile crept across Lily’s face. “You told me you’d be here at seven, so I was ready for seven. Actually, I was ready at six forty-five. Impressive, right?”

His eyes narrowed slightly. “You’re never ready when I tell you what time I’m coming to pick you up. I build a cushion for Lily time.”

The smile shifted to playful annoyance as Lily cocked a hip and crossed her arms over her chest. “If it would make you feel better, I can change clothes and decide that I want a bowl of cereal before we leave.”

“No, no,” he said with a slight chuckle. “I’m sorry. I guess I should have just said thank you, right?”

“No,” she corrected. “You should have offered to put my suitcase in the car because all this chitchat will make us late.” Without another word, Cameron reached beyond Lily and grabbed her case while she locked up her condo. “I watched the Weather Channel last night while I was packing, and they said it’s going to snow while we’re up there. Won’t that be beautiful? We can see snow in Central Park!”

Cam shrugged; he’d never given much thought to snow in Manhattan and didn’t care about it now. They lived just outside of Raleigh, so it wasn’t as if they’d never seen snow before. But that was just one of the things about Lily he adored—that the little things in life made her happy.

Lily had a bigger heart than anyone he’d ever known. He knew that even though she made light of it, she was easily hurt by her family. It didn’t help that her parents always made her feel like she wasn’t living up to her full potential, or that she had an older sister everyone seemed to think walked on water. Cam knew the real Lily. If anyone took the time to get to know her and saw beyond her inability to find a career, they’d see a person who’d give them the world.

For as far back as Cameron could remember, he’d been in love with Lily Cavanaugh. While everyone else around them treated him like a freak because of his intelligence, Lily always considered him Cam, her friend. He’d never once thought about telling her how he felt because the last thing he wanted was to lose Lily as his friend. Most days, she was the only one who kept him sane.

And now he was going to have her to himself for nearly a week.