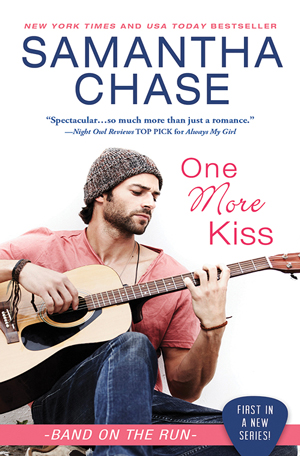 In Samantha Chase’s ONE MORE KISS…

What made you decide to write about a rock star for your hero?

I have always wanted to write about a rock star but never had the focus for the right story.  I cannot play an instrument and I can’t sing, but I have dated a lot of musicians and married one!  My husband is a drummer and with that he’s been in several bands and there is always music in our house.

It’s always fascinating to meet other musicians and figure out their personalities and I’ve found that there is no one “type”.  I’ve met the ego-maniacs and I’ve met the shy and quiet types.  I’ve met the leaders and the ones who are content to play a supporting role.  And through it all, it’s amazing to watch them all work together to create music!  So I’ve had years of inspiration to work with.

The Band on the Run series will really deal with each member of the band Shaughnessy dealing with their own personal crisis.  This all starts with Riley Shaughnessys book, This is Our Song (which is part of the Shaughnessy Brothers series) and now this new trilogy will focus on his band.

I like peeking behind the curtain at these guys and not really talking too much about them as musicians but focusing on what their lives are like off-stage.  The music is a huge part of who they are, but it’s not the only thing that defines them.  It makes for a very diversified character and that excites me when I’m writing a story. VIVIENNE FORRESTER IS A WOMAN WHO GIVES HER ALL

…to her friends and family

…to her online food blog

…to the man she loves

Vivienne will try anything and everything to coax Matt out of his self-imposed exile. But for this to work, Matt is going to have to meet her halfway…

Samantha Chase released her debut novel, Jordan’s Return, in November 2011. Since then, she has published twenty more titles and has become a New York Times and USA Today bestselling author. She lives with her husband of twenty-five years and their two sons in Wake Forest, North Carolina.

One commenter will win a print copy* of ONE MORE KISS!  Good luck!