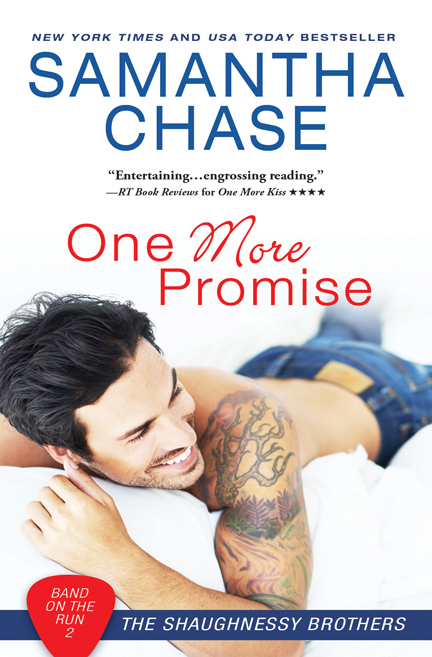 ONE MORE PROMISE by Samantha Chase

Ambitious Paige Walters is ecstatic when she’s hired to recruit musicians for a literacy campaign—it’s her chance to prove she’s got the chops to make it in the family business. When Dylan steps in, she immediately dislikes him and vows not to let the fallen idol screw it up. But as the work brings Paige and Dylan closer together, their attraction grows…and so do their challenges… …to the woman who just walked into his life

Paige Walters must learn to forgive

…and the wonderful man she horribly misjudged

Ambitious Paige Walters is ecstatic when she’s hired to recruit musicians for a literacy campaign—it’s her chance to prove she’s got the chops to make it in the family business. When Dylan steps in, she immediately dislikes him and vows not to let the fallen idol screw it up. But as the work brings Paige and Dylan closer together, their attraction grows…and so do their challenges…

She managed to walk all of two steps when Dylan stepped in front of her. She gasped and looked up at his face.

“What the hell is the matter with you?” he demanded.

“You just walked out of the event that you planned! People were calling after you and you didn’t even slow down!”

Had they? She hadn’t noticed.

“I was done,” she said simply. “I’m tired, and now my ankle hurts, and as I said a few minutes ago, I wasn’t needed. I didn’t think it was a big deal to leave.”

The look Dylan gave her showed that he didn’t believe her one bit. “Really?” he asked sarcastically. “Paige, if there is one thing I’ve learned about you, it’s that everything is a big deal to you—especially this literacy thing. So don’t bullshit me, okay? If you’re pissed about your sister stealing your thunder, then just say so. I’m not gonna argue with you on that one. I think it was a rotten thing for her to do.”

Part of her melted a little at his words, but she already knew he was on her side where that was concerned. And rather than feel good about it, she forced herself to remember that he had plans of his own—with people who were more suited for someone like him.

“Don’t you have a limo waiting for you?” she asked mildly.

Right. Because why wait to party in a limo when he could have a party of his own in three minutes in the privacy of his suite.

God, how she hated this!

“Yeah, okay. Whatever,” she murmured and went to move around him. “I need to go.” In the back of her mind, Paige was prepared to make a glorious exit with her dignity intact.

Her ankle, however, had other plans.

One step. It took one stupid step to make her cry out in pain.

Before she knew it, Dylan scooped her up in his arms and made his way toward the elevator. “Wait! What are you doing?” she demanded, wiggling against him. “My car is that way!” Pointing at the entrance to the hotel for emphasis, she tried to get out of his grasp. “I need to get my valet ticket and…”

The elevator dinged its arrival.

Dylan stepped inside and hit a button, and Paige hit him in the shoulder.

“Ow! Seriously, what the hell, Paige? What’s gotten into you?”

“I am not going up to your room, Dylan!”

“Because I’m not into partying with your friends or threesomes, that’s why!”

You could have heard a pin drop.

Slowly, Dylan lowered her to her feet, and this time she was prepared and babied her ankle when her foot hit the carpet.

“Um…excuse me?” he asked, his voice low and gruff.

Hands on her hips, she knew she would emerge victorious here. “I don’t drink or…or party.” There. She’d said it.

He nodded. “Um…yeah. I get that. But what was that other…um…thing you mentioned?”

“Threesomes. I’m not into them.”

She snorted with disgust. “Right. Because the blond with the limo isn’t up here, right? You left her and her…her…offer to come chase after me? Somehow I doubt it.”

He didn’t say a word. For the life of her, she seriously thought he’d argue with her. That he’d demand to know why she would think that or he’d tell her she was crazy because no man could turn down an offer to go out on the town with a supermodel.

When the elevator came to a stop, he wrapped an arm around her waist and gently led her from it and down the hall toward his room. She wanted to argue that she didn’t want to go, but she was in pain and wanted some ice and maybe some ibuprofen.

He slid the key card into the slot and then opened the door and helped her inside. Paige braced herself to see a naked woman on the bed, and had to admit, she was confused when she didn’t see the blond from downstairs.

She was about to comment on it when Dylan helped her onto the couch and then arranged some throw pillows for her to put her foot up on. Then he walked over to the phone, and she heard him call the front desk. Her head was pounding as she let it roll back on the sofa. She closed her eyes and wanted to die of embarrassment.

And she’d made a complete fool of herself in front of him.

Her craptastic night was complete.