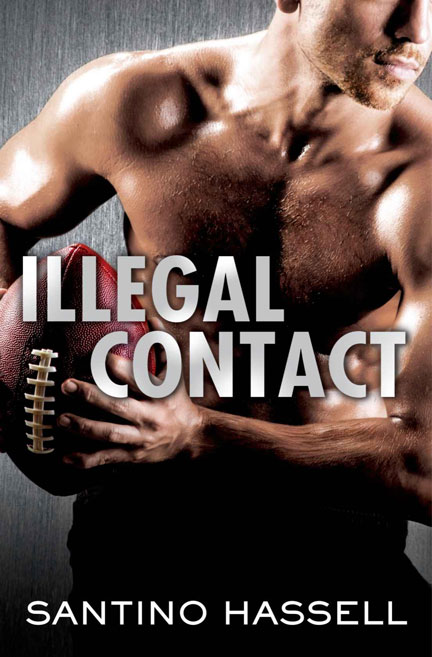 The rules of the game don’t apply off the field in this first Barons novel.

New York Barons tight end Gavin Brawley is suspended from the team and on house arrest after a video of him brawling goes viral. Gavin already has a reputation as a jerk with a temper on and off the field—which doesn’t help him once he finds himself on the wrong side of the law. And while he’s been successful professionally, he’s never been lucky when it comes to love.

Noah Monroe is a recent college grad looking for a job—any job—to pay off his mounting student debt. Working as Gavin’s personal assistant/babysitter seems like easy money. But Noah isn’t prepared for the electrifying tension between him and the football player. He’s not sure if he’d rather argue with Gavin or tackle him to the floor. But both men know the score, and neither is sure what will happen once Gavin’s timeout is over… Somewhere in the past couple of weeks, right around the time I’d watched Noah’s face light up as he threw himself into philanthropic planning schemes and he’d warned me about Joe being a nosy scumbag, I’d lost my mind. Evidence? Me wanting to smack my closest friend for putting the moves on him.

At first I’d thought I was being overprotective. Not even a week ago, I’d had this whole talk with Noah about him feeling safe, and I’d taken it seriously. As a foster kid, I’d never felt safe. Especially in the homes of people who’d temporarily taken me in. I’d been constantly reminded of my precarious position in their houses, and how they could put in a thirty-day notice with my social worker at any point. And they’d used that leverage against me.

I wasn’t about to step into the shoes of bastards who’d worked hard to ensure I would end up distrusting and despising people for the rest of my life.

He was my employee. I was his boss. He obviously didn’t trust me but had agreed to shack up in my house for two reasons only—money to help his father and to catch up on his debt. He didn’t really want to be here, but he had to be. The least I could do was respect his wishes. The same for my friends, but Simeon was laying it on thick.

As he’d run his hands all over Noah, I’d justified each jolt of discomfort by saying Simeon was shitting all over my promise. But Noah agreeing to fan day and whatever else? That had turned discomfort into outright jealousy. Especially since he hadn’t even known my damn name after meeting me at the interview, but he knew all sorts of random facts about Simeon. Simeon, who was in full-throttle, charming superstar QB mode. I was over it.

Regardless, my jealousy was a complete anomaly. Had never happened before. But it was happening right the fuck now, and I was furious with myself. Who cared if Noah was cute and a smartass who wasn’t afraid to tell me to go fuck myself? And so what if that turned me on? Who cared if he was proving to be helpful and loyal enough to warn me about Joe? He was still my employee. I wasn’t supposed to care that he was more interested in my best friend.

Fuck. Whose idea had it been for me to be someone’s boss? I had zero clue what I was doing. Why had I ever listened to Joe?

I returned to the game room and paced the mostly empty space. I’d just seen that anger-management person a few days ago, and every tip and suggestion had flown out of my mind. All I could think about was how pissed I was at myself, and how I needed to go down to the gym and beat the shit out of a punching bag to work it out of my system. The last time I’d been this mad at myself had been when I’d trusted a journalist who’d invented a fake backstory for himself to get me to respond to his prying questions. Then he’d blasted my childhood across the front page of the newspaper.

Gavin Brawley Blames His Out of Control Temper on Hardscrabble Past.

Every word out of context. Bits and pieces of my identity twisted to fit the story he’d wanted. After that, I’d vowed to never talk to a reporter again. I hadn’t expected my emotional thermometer to blast through to enraged over Simeon coming on to Noah. And now I had nothing to use as an outlet. I could work out from morning to night, but after a while it was monotonous. Energy being expended but not going anywhere, and I felt like it circled the air and absorbed right back into my shoulders every goddamn night.

Marcus’ calm voice did nothing to settle me down. “Shut up.”

“Nah.” Marcus yawned and plopped onto one of the sofas. “Fuck, dude, I’m ready for nap time. Your cagey, jealous shit is ruining the vibe.”

“Your white ass gets so flushed when you’re mad that it would be impossible to miss. I thought you were going to jump Simeon when he made that comment about giving ole boy a ride.”

“Yeah, well, what can I say?” I stopped pacing. “I didn’t invite you assholes over here to give my employee a hard time.”

“Your employee.” Marcus threw his muscular legs up onto the couch and stretched out. “Don’t even front like you don’t want to smash him.”

“Bullshit. You were staring them down the whole time we were downstairs. I mean, hey, no judgment. He just looks like a typical white-boy hipster to me, but whatever floats your boat, man. You may want to lay it down for Simeon if you’re serious, though. He most definitely wants to tap that ass.”

I ground my teeth together and tried to remember the last time I’d felt possessive over anyone, but I came up short. Then again, I didn’t normally hang out with the people I had sex with for more than ten minutes after we both came.

“I don’t want Simeon fucking him, and it has nothing to do with me being jealous.”

“Him not pissing off the only person I can stand to have in my house for six months,” I snarled. “Simeon can stick his dick in someone else until Noah is finished here.”

Marcus snickered. He knew I was full of shit. “Let me ask you a question, Gav.”

“Is that a question or a warning about the fact that I can’t stop you from asking even if I wanted to?”

“Probably the last one.” Marcus propped his feet up on the arm of the couch, making himself nice and comfy. “If you’re having jealous temper tantrums over this kid after a month, how the fuck are you gonna act in another two or three? He’s gonna be here all the time, dude. Showering in your bathroom, sleeping in your guest room, jacking it in bed a few thousand square feet away . . .”

“Am I right or am I right, though?” He was right. But I refused to admit it.

“I already told you I’m not jealous. Do we get along? Yeah. We do. And you know that’s a miracle when it comes to me. Half the Barons can’t stand my ass because I won’t laugh at their stupid jokes, but at least they respect me. Most people think I’m a piece of shit.”

“And your boy?” Marcus pressed, looking truly intrigued. “What’s he like?”

“He’s . . .” How was he? What was it about him that had even clicked with me enough to make me want to guarantee he not walk out of the oversized front door and not come back? To become desperate and throw in that huge bonus so he wouldn’t have to keep commuting? “He’s a smartass, but he’s a good person. And he gets me.”

Marcus raised an eyebrow. “How’s he get you? He doesn’t even like football.”

The disgusted tone drew a smile out of me. I plopped down in one of the armchairs and tilted my head back. “He didn’t grow up like me, but . . . he gets it. And he’s not phony. He’s straight up with his opinions and isn’t afraid to tell me them.”

“Basically. He talks almost as much trash as I do, which is probably why we managed to get along. Also, he keeps trying to make me look good to Mel. Gave me credit for all this shit that he came up with. I don’t get it, since I was a total douchebag to him, but I appreciate it. He’s a good dude.”

Marcus rolled off the sofa and sprang to his feet. He arched his back with a jaw-cracking yawn. “You mind if I catch some sleep, dude? I’ve been having nightmares every night for the past few days.”

“What kind of nightmares?”

“Eh. Stress shit. Getting injured before the season even starts. Moe getting hurt messed me up, man.”

“Yeah.” Marcus sobered. “His agent isn’t feeling too good about his contract since this is his last year, and he’s had four fucking surgeries during the life of it. Remember what I said earlier? About them saying he was injury-prone? I wasn’t making it up. His career may be over, man. Or maybe they’ll trade him to some douchebag team like the Predators.”

The Predators were infamous dickholes. It seemed to be a requirement for signing with them. Even their cheerleaders were mean as fuck. The Slytherin of the NFL. The only time I could play a game without everyone mentioning my shitty reputation was if we were playing the Predators. They, as a whole, had a shittier reputation than me.

Marcus arched a brow. “You a prophet now?”

“Yeah. And I prophesize your ass winning the Super Bowl this year.” “Without you and Moe? Nope.”

“For real, man. I love Phil, but he’s no Brawley. He’s small and lean enough to run circles around D- men after a reception, but he has none of your force or bulk. They’re changing everything to account for you and Moe not being there. Fucking sucks.”

It did suck. Even more so because I was now facing the reality that my team was short not one but two starters. If I’d controlled myself better, I’d be there to support them. All of this stress and anxiety about how the season would roll out wouldn’t be on their shoulders, although in my opinion Moe was more of an asset to the team. He was one of the best wide receivers in the league. Even so, I wanted to be there to step up. But I was stuck. Because of my need to escalate shit five times past where it could have ended.

“All right, bud. I’m gonna go talk to Simeon, and you figure out how to get laid.”

I nodded, watching him go, and actually listened to the tip. Between Simeon and Noah, the shit about Moe, and now the news that my replacement wasn’t rising to the occasion of starting for the Barons? I needed an outlet. It was either time to get in a monstrous fistfight or take out the brimming frustration on someone’s ass.

I went for the latter.